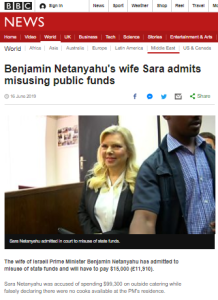 Readers of the report were informed that:

“The wife of Israeli Prime Minister Benjamin Netanyahu has admitted to misuse of state funds and will have to pay $15,000 (£11,910).

Sara Netanyahu was accused of spending $99,300 on outside catering while falsely declaring there were no cooks available at the PM’s residence.

She was charged with fraud and breach of trust last year.”

That last sentence is indeed accurate but those were not the charges to which Ms Netanyahu admitted in the plea bargain which settled the case.

The anonymous writer of the BBC’s report did not however bother to tell readers what the relevant charges were. In order to find that information, readers would have had to click on a link to a Jerusalem Post article presented as follows:

“She will have a criminal record though the charges she faced were reduced, the Jerusalem Post reported.”

The few who did bother to click on that link and read the long article would discover that:

“Under the deal, the prime minister’s wife has confessed to a reduced charge of intentionally exploiting another person’s error, in lieu of the original more serious charge of fraud, and incurs a fine of NIS 55,000, reduced from the original charge of NIS 359,000.”

Accurate representation of the charges is clearly a pretty basic requirement for any journalist reporting a legal story – and especially one bound by editorial standards of accuracy.

Readers can judge for themselves whether the inclusion of a link to a third party website and a vague reference to reduced charges meet the requirements to “do all we can to ensure due accuracy in all our output” and use” clear, precise language” which appear in the BBC’s editorial guidelines.