One might have thought that the recent Israeli election would have provided sufficient drama for BBC journalists to have no need to invent more – but apparently that was not the case for BBC World Service radio’s Tim Franks. 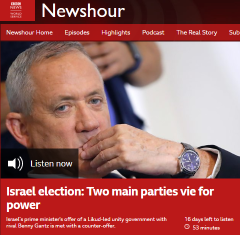 At the start of the lead item in the September 19th evening edition of ‘Newshour’ (from 00:09 here) Franks told listeners around the world that: [emphasis in italics in the original, emphasis in bold added]

“There’s a rather excruciating photo on the BBC News website today of the Israeli prime minister Binyamin Netanyahu and the man who wants his job; the former military chief turned politician Benny Gantz. They’re clasping each other’s hands and smiling. At least I think that’s what they’re doing: their teeth are bared anyway. The photo-op was at a memorial ceremony for a former Israeli prime minister in Jerusalem and came as the two men are jousting over who should try to build – and who should lead – a new governing coalition.”

At the end of the item (from 12:30) Franks returned to the subject of that photograph taken at the same day’s memorial for Shimon Peres.

“I mentioned that that photograph is excruciating. You can of course make up your own mind, make up your own adjective, if you head to the BBC website […] to see Benny Gantz and Binyamin Netanyahu giving each other what I think are smiles.”

That photograph can be found here and readers can judge for themselves whether Franks’ claim that it is “excruciating” and that “teeth are bared” stands up to objective examination.

It is of course pretty safe to assume that had Gantz and Netanyahu not shook hands and smiled when they met at an official state ceremony, Tim Franks would have had some banal editorialised comment to make about that too. 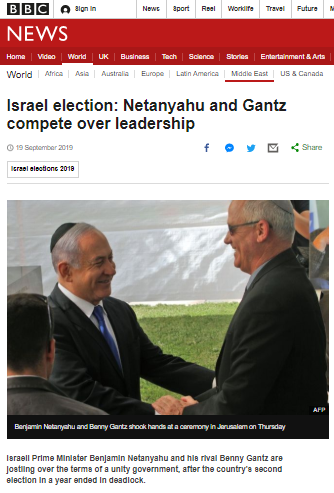