Earlier this week we noted that in an article published on the BBC News website on November 22nd, MK Gideon Sa’ar was inaccurately described as “the education minister”. 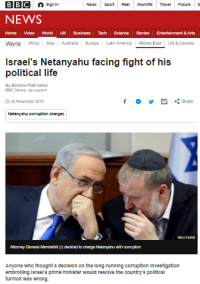 “Gideon Sa’ar has not been the Minister of Education for over six years. He held that post between March 31st 2009 and March 18th 2013 and since then there have been three other ministers.”

BBC Watch contacted the BBC News website to alert editors to that inaccuracy but over 24 hours later no reply had been received and no correction made. We therefore submitted a complaint on November 24th.

On November 25th we received a response from the BBC News website informing us that:

“This sentence was amended in the hours after publication, to now correctly refer to Gideon Saar as “The former education and interior minister…””

The amendment was in fact made at least two days after publication and no footnote has been added to inform audiences that they were previously given inaccurate information.