Following the death of Hosni Mubarak on February 25th, the BBC News website published an article titled “Mubarak: Egyptian statesman of war and peace” on its Middle East page. 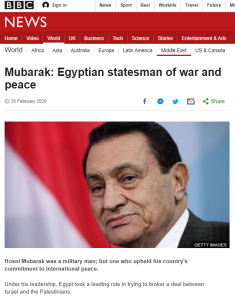 The article includes portrayals of chapters in Middle East history, some of which are notable for their inaccuracies and omissions.

“Mubarak was instrumental in planning the surprise attack on Israeli forces at the start of the 1973 Arab-Israeli war.

The raid took place on Yom Kippur, the holiest day of the Jewish calendar. Mubarak became a national hero for the role the air force played in the initial thrust across the Suez Canal.

Russia and the United States came close to superpower conflict as they rushed to supply their respective allies. Israel repelled the invasion; but eventually ceded Sinai back to Egypt.”

Readers are not informed that Israel’s withdrawal from the Sinai Peninsula took place within the framework of the Israel-Egypt peace treaty.

“He [Mubarak] was not a noted supporter of the 1979 Camp David peace agreement – signed by President Sadat and the Israeli Prime Minister, Menachem Begin.”

The Camp David Accords were signed in September 1978. The Egyptian-Israeli peace treaty was signed in March 1979.

“The treaty sharply divided the Arab world. Mubarak regretted Sadat’s failure to prevent relations with moderate allies deteriorating; and radical groups were inflamed at what they saw as a sell-out.

In October 1981, soldiers sympathetic to one such group assassinated Sadat during a parade commemorating his victory in the 1973 Arab-Israeli conflict.”

Egypt’s Sadat of course did not win a “victory” in the Yom Kippur war and that parade was actually to commemorate Operation Badr. Readers are not informed that the group responsible for Sadat’s assassination was the Egyptian Islamic Jihad.

“Egypt – expelled from the Arab League in 1979 – was readmitted, and the organisation’s headquarters returned to its original home on the banks of the Nile.”

Readers are not told that – as stated in the BBC’s own timeline of the Arab League – Egypt was “suspended from the Arab League in the wake of President Anwar Sadat’s visit to Jerusalem and Egypt’s peace agreement with Israel”.

Despite those omissions and inaccuracies – most notably the inversion of the outcome of the Yom Kippur war – readers scrolling to the bottom of the page find a link telling them “Why you can trust BBC News”.