On March 3rd BBC audiences found reports on multiple platforms promoting what is repeatedly and openly defined by a BBC reporter as “a political statement”.

Visitors to the BBC News website found an article titled “Banksy decorates West Bank hotel with views of Israel’s wall” in which they were told that: [emphasis in bold added]

“A hotel which prides itself on the “worst view in the world” is set to attract international attention – because it is a collaboration with the famous street artist Banksy.

The Walled Off Hotel in Bethlehem looks out on the concrete slabs of the controversial barrier Israel has built in and around the occupied West Bank.

Israel says it is needed to prevent terror attacks. Palestinians say it is a device to grab land and the International Court of Justice has called it illegal.

The rooms of the hotel are also filled with the anonymous artist’s work, much of which is about the conflict.

The owners say it will be a real, functioning hotel, opening on 20 March.

But the hotel is also part art gallery and part political statement.”

As is inevitably the case in BBC content relating to the anti-terrorist fence, readers are not informed that 95% of the structure as a whole is made of wire mesh or that the highlighted ICJ advisory opinion was marred by politicisation.  And of course while the article (together with the other reports on the same theme) includes the standard employment of the qualifying ‘Israel says’ formula to portray the structure’s purpose, the view presented to BBC audiences excludes any mention of the murders of hundreds of Israeli men, women and children by Palestinian terrorists that prompted the fence’s construction.

The caption to the final image illustrating the article reads “The hotel will accept bookings from 11 March, nine days before its opening” and immediately below that readers are again informed that “The Walled Off Hotel opens on 20 March”. BBC editorial guidelines concerning advertising and “product prominence” state:

“…we must avoid any undue prominence which gives the impression that we are promoting or endorsing products, organisations or services”.

In addition to that written report, visitors to the BBC News website found a filmed report also shown on BBC television programmes. Titled “Banksy hotel, The Walled Off, opens in Bethlehem“, the report is billed: 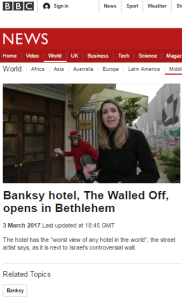 “The hotel has the “worst view of any hotel in the world”, the street artist says, as it is next to Israel’s controversial wall.”

That report was produced by Alex Forsyth – a political correspondent for BBC News who has recently been based in Beirut and who apparently just happened to be 245 kilometers away in Bethlehem on the day that the PR media campaign for this “political statement” was launched. [emphasis in bold added, emphasis in italics in the original]

Forsyth: “This is Banksy’s latest creation. It’s a hotel in Bethlehem. It’s called the Walled Off – which is a play on the famous Waldorf – and the reason for that is it’s situated just feet away from the barrier which separates the West Bank from Israel. More than just a business, this is a political statement by Banksy – a comment on what he sees as the plight of Palestinians. It’s come as a surprise to people living here. Nobody knew he was behind it until today and we can take a first glimpse at what he created so let’s take a little look inside.

This is the reception; it leads through to the lounge area. Everything in here was designed by Banksy. It’s taken some 14 months to create. He fully funded the project although he won’t say how much it’s cost. He describes it as the hotel with the worst view in the world and that is because if you look through the windows you can see the wall which is so nearby. Now that was built by the Israelis and they say it’s essential for their security and to prevent terror attacks. Many Palestinians feel that it encroaches on their freedom and if you look round this hotel you can see on the walls there are symbols of Banksy’s view on the situation here: his political comment. It’s not the first time he’s been to this area. He has painted on the wall itself in the past. Some have criticized him for that, saying he is normalising the wall and that shouldn’t be the case. His argument is that he’s raising awareness and the team behind this hotel are keen to stress that it employs local staff – some 45 people – and is run by a local Palestinian. There are 9 rooms, the prices start at $30 a night but they say this is not a money-making operation; instead this is about raising awareness.”

Corfield: “The British graffiti artist Banksy is opening a guest house on the occupied West Bank which he claims will be the hotel with the worst view in the world. The building in Bethlehem is a few feet from part of a wall that was built by the Israelis. Our correspondent Alex Forsyth paid it a visit.”

Forsyth: “From the self-playing grand piano to the Chesterfield sofas, the hotel’s lounge mirrors an English gentleman’s club. But the walls are adorned with images depicting Banksy’s view of the Palestinian plight: a collection of mock security cameras, images of angels wearing gas masks and Israeli soldiers pillow fighting with Palestinians. Entirely designed and funded by Bansky, this is a functioning and permanent guest house – not a temporary installation. Staffed by local Palestinians, prices range from £25 a night for a bunk bed in a bleak dormitory to hundreds for a stay in the plush presidential suite. From almost every room there’s a view of the wall: part of the West Bank barrier built by Israel, which says it’s essential for security. Deliberately situated just feet away, the Walled Off hotel is as much a political statement as a new business.”

Forsyth’s claim that the project is not a “temporary installation” is not supported by the hotel’s website.

The hotel’s website provides further insight into what the project is “raising awareness” about:

“Britain got its hands on Palestine in 1917 and the piano bar is themed as a colonial outpost from those heady days. It is equipped with languid ceiling fans, leather bound couches and an air of undeserved authority.”

As CNN reported, the press release which accompanied the PR campaign that the BBC elected to generously amplify also included a reference to contemporary British politics.

‘”It’s exactly one hundred years since Britain took control of Palestine and started re-arranging the furniture – with chaotic results,” said Banksy in a press release handed out at the hotel’s opening.

“I don’t know why, but it felt like a good time to reflect on what happens when the United Kingdom makes a huge political decision without fully comprehending the consequences,” the statement read, referencing in one line Balfour and Brexit.’

The BBC, however, chose to focus audience attentions away from those UK related areas of “political comment”, preferring instead to promote the facile slogan “plight of the Palestinians”.

This is of course not the first time (see ‘related articles’ below) that the BBC has taken the editorial decision to promote and amplify what apparently passes as “political comment” on the Arab-Israeli conflict from a person not even prepared to identify himself to the general public.

It is also far from the first time that the BBC has promoted simplistic politicised commentary on the anti-terrorist fence while erasing its proven efficiency – and the hundreds of Israelis murdered by Palestinian terrorists before its construction – from audience view.