The Israel Security Agency’s report on terror attacks (Hebrew) during November 2017 shows that throughout the month a total of 84 incidents took place: fifty-three in Judea & Samaria, twenty-nine in Jerusalem, one within the ‘green line’ and one in the Gaza Strip/Sinai sector.

In Judea & Samaria and Jerusalem the agency recorded 72 attacks with petrol bombs, six attacks using explosive devices, one shooting attack, one vehicular attack and two arson attacks. A fatal stabbing attack took place in Arad and there was one incident of multiple mortar fire from the Gaza Strip.

During November one soldier was murdered in the stabbing attack in Arad and two civilians were wounded in the vehicular attack at Gush Etzion Junction.

As noted here at the time, the BBC News website did not produce any reporting on that vehicular attack. The stabbing attack in Arad on November 30th in which Sgt Ron Yitzhak Kukia was murdered was covered the next day in a BBC report that also mentioned the mortar fire from the Gaza Strip. None of the additional incidents that took place during November received any BBC News website coverage.

Throughout the first eleven months of 2017 the BBC News website has reported 0.79% of the total terror attacks that took place and 88% of the resulting fatalities.

An article published on the BBC News website on December 1st related to two incidents that had taken place the previous day.

At around 9:30 p.m. on November 30th a young man was stabbed to death at a bus stop in the town of Arad. The victim was later identified as IDF soldier Sgt Ron Yitzhak Kukia from Tel Aviv, aged 19, and the incident – which is still under investigation – is being treated as a terror attack.

Over twelve hours after the incident occurred the BBC News website produced a report titled “Israeli soldier stabbed to death in ‘terror attack’” in which, for reasons unknown, it decided to anglicise his middle name. 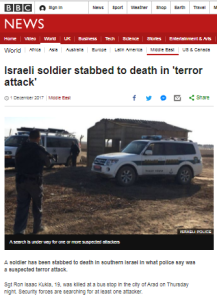 “A soldier has been stabbed to death in southern Israel in what police say was a suspected terror attack.

Sgt Ron Isaac Kukia, 19, was killed at a bus stop in the city of Arad on Thursday night. Security forces are searching for at least one attacker.”

Readers also found statements that have been recycled using different numbers on numerous occasions throughout the last two years. Although the information is readily available, the BBC did not cite the actual number of Israelis murdered in terror attacks since September 2015 – fifty-four – but made do with an approximation.

“Some 50 Israelis and five foreign nationals have been killed since late 2015 in a series of gun, knife, and car-ramming attacks, predominantly by Palestinians or Israeli Arabs.

Around 300 Palestinians have also been killed in that period. Most were assailants, Israel says, while others were killed in clashes with troops.”

Notably, the BBC continues to use the “Israel says” formula in that statement and – despite having had over two years to do so – has apparently not bothered to independently confirm how many of the Palestinians killed during that time were in the process of carrying out terror attacks.

The second incident mentioned in the report was portrayed in a manner that suggested some sort of connection between the two events even though no such linkage has been established.

Thursday night’s attack [in Arad] came hours after Israeli tank-fire and air strikes struck militant positions inside the Gaza Strip in response to mortar fire across the border into Israel.

Israel said it targeted sites belonging to the militant Islamist movements Hamas and Islamic Jihad. An Israeli military spokesman indicated that Islamic Jihad was suspected of being behind the mortar fire, though no group has said it was responsible.

The mortar attacks came one month after 12 Islamic Jihad militants were killed when the Israeli military destroyed a tunnel they had dug under the border into Israel.

Islamic Jihad threatened at the time to take revenge for the deaths.”

In fact twelve mortars were fired on the afternoon of November 30th at an IDF post near the border with the north-eastern Gaza Strip. Interestingly, readers were not informed that – as reported in the Israeli media – army spokespersons indicated that the IDF knew – rather than “suspected” – that the PIJ carried out the mortar attacks.

“The army spokesperson said the attack was carried out by the Islamic Jihad terror group. “We know who conducted the attack, we even know them by name,” Conricus said.”

Predictably, the BBC’s report did not provide readers with any information concerning the effects of the PIJ attacks on civilians in the area.

“Security officials issued instructions to cease train operations between Ashkelon and Sderot, and farmers were ordered to vacate fields located around the Gaza region. In addition, all work on the Gaza border fence was suspended and IDF forces were ordered to leave the area.

One of the farmers evacuated from the area recounted the fire exchange.

“Five workers were working in the orchard in a plantation near the border. Suddenly there was a series of explosions, one after the other. We dropped to the ground and put our hands on our head. We thought we were being shot at,” he recalled.

“The explosions lasted about five minutes. The moment they ended we picked up our tools and bolted. We were really scared. It was all very jolting.””

The BBC’s claim that “Israel said it targeted sites belonging to the militant Islamist movements Hamas and Islamic Jihad” is obviously inaccurate. In fact the IDF announced that it had targeted “six terrorist military positions in Gaza” and “military posts belonging to terror organisations”.

As we see, the corporation not only refrains itself from using accurate terminology to describe the terror groups Hamas and Palestinian Islamic Jihad and their operatives, but even puts inaccurate wording into the mouths of Israeli officials.

BBC News report on Gaza tunnel equivocal about its purpose

Palestinian Islamic Jihad clarifies what the BBC did not