It is not difficult to discern when the BBC is running a campaign rather than merely reporting a story. One indication is the promotion of an item on multiple platforms and such was the case on February 3rd when listeners to the 6 am news bulletin on BBC Radio 4 were told that:

“The BBC has found evidence that Israel is sending unwanted African migrants to third countries under secretive deals which may be in breach of international law. Migrants from Eritrea and Sudan say they’re fleeing violence. Israel says they are a threat to security but strongly denies acting illegally.”

The news bulletin on the same station one hour later – at 7 am – further expanded the topic.

“The BBC has found evidence that Israel is sending unwanted African migrants to third countries under secretive deals which may be in breach of international law. There are about 45,000 Eritrean and Sudanese migrants in Israel. Kathy Harcombe has more details.

KH: The Israeli government calls them infiltrators who pose a threat to the security and identity of the Jewish state. But the migrants from Eritrea and Sudan say they’re fleeing violence and persecution. Israel doesn’t forcibly deport them but has introduced a policy that gives the choice to leave for a third country in Africa or be jailed indefinitely. Those third countries, the BBC has been told, are Rwanda and Uganda. Lawyers taking the Israeli government to the Supreme Court argue that increasingly tough measures against the migrants amount to a breach of the UN Refugee Convention. Israel however says that it has no doubt that it is acting legally. Rwanda has never confirmed the deal and the Ugandan government has denied that any such agreement exists. It’s also told the BBC it’s now investigating how migrants who claim to have been sent from Israel are entering the country.”

Listeners to BBC Radio 3 Breakfast show on the same day also heard similar promotion of that story in the 8 am news bulletin.

“The BBC has found evidence that Israel is sending unwanted African migrants to third countries under secretive deals which may be in breach of international law. It’s alleged the migrants are made to choose between going to prison indefinitely and being sent away. Israel’s government says it’s acting legally.”

All that, however, was only the aperitif. Throughout the day, reports from BBC Africa’s Kathy Harcombe were to be found on a variety of BBC platforms.

BBC World Service radio’s ‘Newsday’ broadcast an audio report which was also promoted separately on social media under the inaccurate and misleading title “Israel accused of illegally deporting Africans“. Harcombe’s expertise in her subject matter was demonstrated in her opening sentence:

“Deep in the Negev desert in Israel – hours away from the capital Tel Aviv – is the Holot detention centre.” [emphasis added]

Filmed reports shown on BBC News television programmes were also promoted on the website under the headlines “Israel ‘sending away African migrants’” and “Life in Israel camp is a ‘waste of time’“.

Listeners to BBC Radio 4’s ‘PM’ programme heard another audio report  – from 38:59 here – which also included an inaccurate reference to Tel Aviv as Israel’s capital and was introduced by Eddie Mair as follows:

“BBC Africa has gathered evidence that Israel is sending unwanted African migrants to third countries under secretive deals which may be in breach of international law.”

All of the above news bulletins and reports present the story as though it were a BBC scoop, with repeated use of the claim that “the BBC has gathered evidence” or “found evidence”.

In fact, there is nothing new or “secretive” about this story at all: it has been in the public domain for nearly two years and related court cases initiated by a coalition of NGOs (which includes ACRI, Kav LaOved and Physicians for Human Rights)  have been going on since April 2015. Lawyer Anat Ben Dor, who appears in most of Harcombe’s pieces, has provided legal representation for that coalition of NGOs in these court cases but that fact and the name of the organization she represents is not adequately communicated to BBC audiences in some of the reports.

Harcombe steers audiences towards the mistaken belief that the migrants in Israel are without exception refugees with commentary such as this from her audio and filmed reports:

“The people here say that they came to Israel to seek refuge from conflict or persecution. But the Israeli government has granted asylum to fewer than 1%.”

She does not clarify what that percentage actually means (1% of the total number of migrants? 1% of those requesting asylum?) and she does not inform audiences that in fact, whilst almost 50,000 Sudanese and Eritreans have illegally entered Israel, only about 1,800 of them had requested asylum as of January 2014. 67% of the mostly younger male migrants who entered Israel via Egypt come from Eritrea and 25% from Sudan and – as Harcombe should know because the BBC has reported the story – the status of migrants from Eritrea has also come under discussion in Europe – including in the UK.

Harcombe’s headline-grabbing claims of “breach of international law” are based on her assertion that:

“By failing to ensure the safety of its unwanted African migrants, some legal experts say Israel is in breach of its obligations under the UN Refugee Convention.”

A decision from Israel’s Supreme Court in 2015 (paragraph 4) provides information concerning Israeli efforts to ensure the welfare of those leaving Israel for a third country, including the inspection and confirmation of implementation of agreements with that country by envoys of the Israeli government (including meetings with migrants) and the appointment of a personal contact in Israel’s Population and Immigration Bureau for each person moving to a third country in order to facilitate communication if problems arise.

BBC audiences are not told how Harcombe managed to locate and contact the “two men who say that they were abandoned as soon as they got off the plane” whose stories form the basis of the allegations in these reports and the backbone for the claim of a scoop.

However, it is not unreasonable to assume that contact with those two men may have been facilitated by the campaigning NGOs which are obviously the source of this story. Last year a representative of one of those organisations – Sigal Rozen who is interviewed in Harcombe’s written article – produced a report that includes remarkably similar stories which were collected by Harcombe’s other interviewee, lawyer Anat Ben Dor. The background to the BBC’s repeated claims that it has “found evidence” or “gathered evidence” therefore requires clarification.

Clearly, this BBC ‘scoop’ is in fact a self-conscripted contribution to the PR efforts of a campaign being run by a coalition of political NGOs.  That in itself does not come as much of a surprise: the BBC has a record of reporting on the issue of African migrants in Israel which includes the regurgitation of a report from Human Rights Watch, the amplification of allegations of racism from a very dubious anti-Israel campaigner and one-sided reporting which has serially failed to present the viewpoint of the people of the neighbourhoods of south Tel Aviv where the majority of the migrants live.

However, the BBC’s funding public has the right to know that such an energetically promoted multi-platform ‘scoop’ is in fact part of a political campaign. Audiences also have the right to expect transparency concerning any third-party involvement in locating and recruiting interviewees and BBC editorial guidelines on impartiality dictate that the political agendas of the campaigning NGOs which are obviously the source of these multiple reports should have been made known to viewers, readers and listeners.

In the early hours of May 6th confused reports began to emerge concerning explosions in Khartoum.

“The Hezbollah-affiliated television channel Al-Mayadeen and foreign media outlets quoted a message issued by the Sudanese army saying that Sudanese forces shot down an Israeli unmanned aerial vehicle north of the capital of Khartoum overnight Tuesday. Sudanese citizens reported hearing loud explosions during the night. Officials in the Sudanese army arrived at the scene of the strike.

The Al-Araby al-Jadeed newspaper reported overnight Tuesday that “foreign planes” had struck a target in Omdurman, in the capital state of Khartoum, citing Sudanese military officials described as “credible”.

According to the report, which has not been officially confirmed, a military source said that “members of the Air Defense Command in Sudan hit targets, with the assumption being that the strike was carried out by a warplane in the area of Wadi Seidna in the city of Omdurman.”

The Sudanese Army spokesman Colonel Al-Sawarmy Khaled Saad said in an interview with Arabic-language Sky News Arabia news channel on Wednesday that the army’s Air Defense systems intercepted overnight Tuesday a “moving object that resembles a plane or a rocket’ in the area of the city of Omdurman.

In contrast to reports in Arab media outlets, the spokesman denied the military facilities were targeted by a domestic or foreign source. He claimed that the Air Defense forces intercepted the object after finding it suspicious.

According to the report, senior officials in the Sudanese army arrived at the scene of the strike but have yet to ascertain the target of the attack.”

Various media organisations ran the story – the details of which have still not been confirmed at the time of writing – with speculation of Israeli involvement being promoted despite the fact that the only apparent supporting ‘evidence’ was guesswork.

“Witnesses in Omdurman said they saw and heard large explosions at a military site near the city, which sits across the Nile River from the capital Khartoum, the Al-Araby news outlet reported.

Witnesses told the paper they thought the planes had come from Israel, which has been fingered for airstrikes in Sudan in the recent past.”

Whilst the BBC did not publish an article on the topic on its English language BBC News website, Twitter followers of its World Service Africa Editor Mary Harper received the following Tweet.

The attached link leads to the BBC News website’s live ‘Africa round-up’ page for May 6th where this item appeared:

No stand-alone report on the topic appeared on the website’s Africa or Middle East pages. 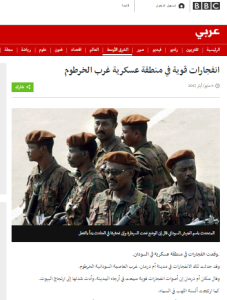 involvement in the incident despite – as noted by the Deputy Editor in Chief of the Sudan Tribune – there being no confirmation of that particular version of events or indeed any other.

One obvious question which arises is why the BBC considered this story suitable for publication on its Arabic language website but not on its English language equivalent.

Another notable point is that if the BBC is going to promote the notion that Israeli planes attacked “Sudanese military installations” despite the lack of any concrete evidence to support that claim, then obviously there is also a need to include factual information concerning the history of Iranian arms smuggling to Palestinian terrorist groups in the Gaza Strip via Sudan rather than just the standard ‘Israel says’-type mention at the end of the BBC Arabic report.

Meet Naziru Mikailu. He works for the BBC World Service/ BBC Africa. And he likes to Tweet.

“You shouldn’t state your political preferences or say anything that compromises your impartiality. Don’t sound off about things in an openly partisan way. Don’t be seduced by the informality of social media into bringing the BBC into disrepute.”