Earlier this year BBC Monitoring produced a backgrounder on a topic the UN has been flagging up for some time. Titled “Iranian drought raises environmental alarm“, the backgrounder – a version of which was also published on the BBC Weather website – explains that:

“The ongoing drought in Iran has raised fears of an environmental disaster, with warnings that the impact to many parts of the country’s ecosystem could lead to severe consequences, such as population displacement and mass migration.

Years of low rainfall, rising temperatures, mismanagement and population growth have led others to warn of a security threat and sandstorms engulfing as much as “a quarter of Iran’s territory”.

Recently Israel offered to help the Iranian people to combat those long-standing problems. 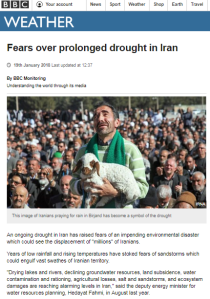 “In his remarks in a video clip posted on Facebook with Farsi subtitles, Netanyahu began by pouring and sipping a glass of water, detailing his plans to launch a Farsi website explaining how Iranian farmers can recycle their waste water. […]

“Now, Israel also has water challenges. We’ve developed cutting edge technologies to address them. Israel recycles nearly 90% of its waste water. That’s far more than any other country on earth,” he proclaimed.

“Israel has the know-how to prevent environmental catastrophe in Iran. I want to share this information with the people of Iran. Sadly, Iran bans Israelis from visiting, so we’ll have to get creative,” he continued.

“We will launch a Farsi website, with detailed plans on how Iranians can recycle their waste water. We will show how Iranian farmers can save their crops and feed their families,” the prime minister promised.”

That offer has proved very popular – but not of course with the Iranian regime.

“The prime minister of this regime (Israel) or any other person who claims to have the ability to manage water resources is aware that Iran is among the countries whose several-thousand-year record of water management has been recognized and we can be a source for other world regions in this regard and promote methods to cope with water shortage and optimum use of water,” Ardakanian told reporters at the end of a cabinet meeting in Tehran on Wednesday.”

Interestingly, the same BBC which considered the Iranian drought important enough to justify the compilation of a backgrounder only six months ago has not found the offer from a country that is one of the world’s leaders in water management technology worthy of a news report.

The sandstorm currently afflicting some areas of the Middle East received written and filmed coverage on the BBC News website’s Middle East page on September 8th and 9th.

Embedded in the written report is an additional filmed item from BBC Weather’s Louise Lear which was also promoted separately on the Middle East page under the heading “BBC Weather: Why a dust storm?” and appears on the BBC Weather website under the title “Dust storm hits Middle East“.

At the beginning of that item Lear tells viewers:

“A significant sandstorm – or haboob as you may well know them – generated on Sunday in Iraq. It then travelled hundreds of thousands of miles westwards towards Syria and Lebanon…”

“Hundreds of thousands of miles”? According to Google Maps the driving distance from Baghdad to Beirut is 973 kilometers (605 miles). Even if one were to double or triple that distance to take into account the fact that the dust came from the desert regions of Iraq to the south-west and did not travel a linear route, one still could not accurately say that the sandstorm travelled “hundreds of thousands of miles” – i.e far more than the circumference of the entire planet.

Once again we see that Middle East geography is not a strong point at BBC Weather.

BBC Weather doesn’t know in which country Jerusalem is located

Thanks to @moidov for bringing the following to our attention via Twitter.

Of course the BBC – including its weather department – has long refused to come to terms with the fact that Jerusalem is the capital city of Israel and this latest invention of a location called ‘null’ is therefore entirely in keeping with its existing policy.

And if readers are in need of a reminder of the embarrassingly ahistorical foundations underpinning that policy, here it is:

“The [BBC Trust’s Editorial Standards] Committee noted that while there is no expectation that in a two-state solution West Jerusalem would become Palestinian territory, a UN resolution passed in 1947 has not been rescinded. It calls for the whole of Jerusalem to be an international city, a corpus separatum (similar to the Vatican City), and in that context, technically, West Jerusalem is not Israeli sovereign territory.”

If, perchance, you decided to search for the weather forecast for London on the BBC Weather website you would also be offered the additional option of checking out the weather in the country in which that city is situated.

The same option exists for other cities, capitals or not. Here, for example is Athens:

And here is New York:

If you happen to be looking for the weather forecast for Tel Aviv, you will naturally also be offered the option “Israel”. 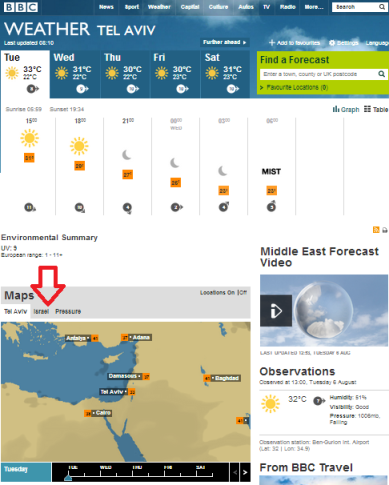 But if your search was for Israel’s capital city, well…that city is not located in any country at all according to the BBC. 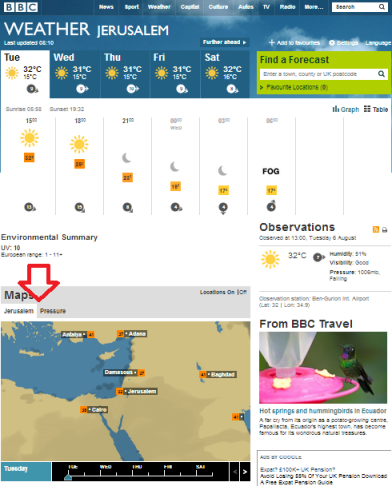 However, it seems that the BBC does manage to be rather less precious when it comes to other cities surrounded by controversy. According to the BBC Weather website, Gibraltar is situated in Gibraltar:

Nicosia – a city divided by a ‘green line’ – is situated in Cyprus:

El Aaiun is listed as being located in Western Sahara: 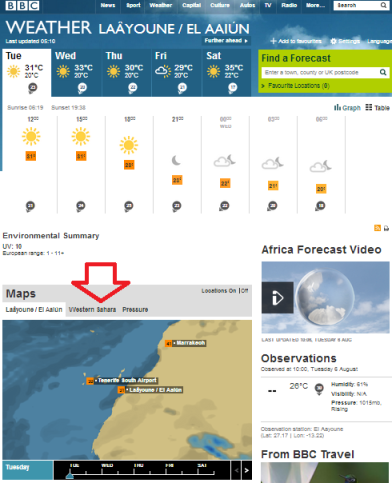 And the capital of Tibet is situated in China.

As our eagle-eyed friends at The Commentator noticed yesterday, the BBC Twitter account running under the banner “never get caught out by the weather” was itself caught out when it was hacked by a pro-Assad group calling itself ‘The Syrian Electronic Army’.

The BBC News website later ran an article on the subject on its technology page in which it was revealed that other BBC Twitter accounts were also hacked. The BBC reported:

“Alongside the standard tweets from the weather feed such as “‘last night was chilly” some more bizarre comments began emerging.

They included: “Saudi weather station down due to head-on collision with camel.”

Another read: “Chaotic weather forecast for Lebanon as the government decides to distance itself from the Milky Way.” “

The article also quotes an internet security consultant as stating:

“The good news is that the hack doesn’t appear to have been done with the intention of spreading malicious links or scams. Instead, it appears that the Syrian Electronic Army are trying to spread political messages about Syria instead.”

In actual fact, some of the Tweets were considerably less benign than the BBC tries to make out in this article, with one making a Helen Thomas-style suggestion that residents of Haifa should “return to Poland” and another portraying a nuclear attack on Tel Aviv. 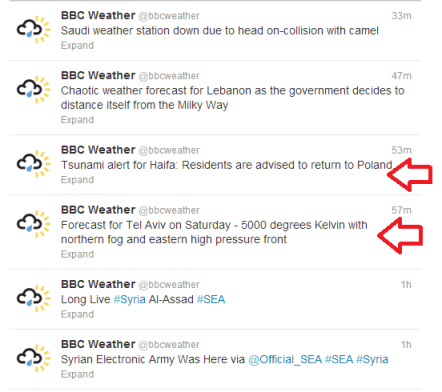 Why would the BBC apparently find it necessary to tone down the hackers’ attitudes by ignoring those two offensive Tweets in its report on the incident?