In any country – including Britain – one can find extremist groups with a racist and/or discriminatory agenda. It is however highly doubtful that the BBC would broadcast a report in which a leader of the BNP or the EDL claimed to have the support of the whole of the British people without that statement being challenged or qualified.

On February 9th a filmed report by freelancer Camilla Schick appeared on the BBC News website’s Middle East page under the headline “Jerusalem Jewish group on anti-Arab patrol“. The report is about the fringe group ‘Lehava’ and it opens with statements from an unidentified interviewee. Later on Schick speaks to a woman who identifies herself as part of a counter group called ‘Speaking in the Square’ and asks her whether Lehava is “mainstream Israeli”. 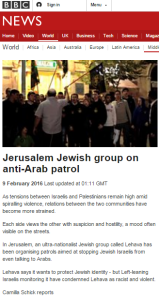 Schick: “But a significant minority.”

That exchange does not of course clarify to BBC audiences that Lehava is a small fringe group with very limited following. Later on in the report Schick interviews the group’s leader and the misleading impressions already received by viewers are further compounded.

Schick: “Do you think that your views represent a large section of Israeli society?”

Gopstein: “We are the majority. Most of the nation are with us.”

Schick: “So you would argue that because it’s Jewish law that only Jews can marry Jews, that actually a majority of people in Israel believe in what you do?”

Gopstein: “We do what all the people here think.”

Schick presents no challenge to Gopstein’s delusional and patently inaccurate claims; evidently preferring to leave audiences with the false impression that his group’s extremist ideologies and agenda are supported by “a majority of people in Israel”. She makes no effort to inform audiences of the criticism of the group from the public and politicians alike (even though the BBC has reported on such condemnations in the past) or of the legal and police action taken against its activists.

Although Lehava was established in 2009, the synopsis to the version of this report appearing on the BBC News website clearly attempts to create linkage between that group’s activities and the current wave of terror attacks against Israelis.

“As tensions between Israelis and Palestinians remain high amid spiralling violence, relations between the two communities have become more strained.

Each side views the other with suspicion and hostility, a mood often visible on the streets.

In Jerusalem, an ultra-nationalist Jewish group called Lehava has been organising patrols aimed at stopping Jewish Israelis from even talking to Arabs.

Lehava says it wants to protect Jewish identity – but Left-leaning Israelis monitoring it have condemned Lehava as racist and violent.”

This filmed report is actually just part of an item which appeared on the BBC World News programme GMT. Presenter Lucy Hockings’ very similar introduction to the film also promoted the notion of linkage between the activities of Lehava and the current wave of violence whilst promoting the notion of equivalence.

Hockings: “We take you now though to Israel where tensions between Israelis and Palestinians remain high and relations between the two communities are becoming even more strained. In Jerusalem an ultra-nationalist Jewish group called Lehava has been organizing patrols aimed at stopping Jewish Israelis from even talking to Arabs. Lehava says it wants to protect Jewish identity but Left-leaning Israelis monitoring it have condemned them as racist and violent. Camilla Schick has more.”

After the airing of the clip, Hockings interviewed a member of Lehava named Eli Rakov. During the conversation, viewers again saw an attempt to link Lehava to the current violence in the form of a sub-title reading “Israeli Palestinian tensions: relations between 2 communities becoming more strained”.

Hockings closed that interview with a question which again implies that the current wave of violence can be linked to the activities of Lehava.

“But can I ask you – if you have now got weddings taking place under police protection because your group is there chanting things like ‘death to Arabs’; there is this feeling even that you are creating a climate in which dialogue is offensive and racist – how do you think there can ever be peace in your country?”

In addition to the fact that the placement of Schick’s filmed report as a stand-alone item on the BBC News website clearly misleads BBC audiences by promoting the inaccurate impression that Lehava’s extremist agenda has support from the wider Israeli public, there is an additional aspect to both versions of this report which is worthy of note.

As abhorrent and offensive as Lehava’s agenda and activities are, they are by no means new and have little if any connection to the current wave of terrorism in Israel which – not for the first time – is misleadingly represented by the BBC in equivalent terms such as “tensions between Israelis and Palestinians” and “strained” relations “between two communities”.

Given that the BBC has for five months studiously avoided producing any serious reporting on the issue of the incitement and glorification of terrorism from official Palestinian sources which underpins the ongoing wave of violence and often includes racist themes, it is particularly remarkable that it now chooses to showcase and inflate a fringe Israeli group in order to promote the notion that it is that group’s offensive and racist dialogue which is the barrier to “peace in your country”.

At the end of last year we noted here that one of the political NGOs most quoted and promoted by the BBC during 2014 was Human Rights Watch (HRW). The media practice of uncritically amplifying press releases and reports put out by third parties – known as ‘churnalism‘ – is of course by no means limited to the BBC but the corporation’s editorial guidelines mean that, in contrast to other organisations, the BBC has an obligation to inform audiences of any political agenda and/or ideological affiliations which may have a bearing upon the impartiality of the information put out by the NGO concerned.

It is well over five years since HRW’s founder blew the whistle on its obsessive, politically motivated focus on Israel. As has been noted on these pages on numerous occasions since last summer, HRW is one of a number of politically motivated NGOs engaged in the lawfare campaign against Israel. That background is obviously essential knowledge for any member of the BBC’s audience viewing, hearing or reading a report about Israel based on claims made by Human Rights Watch and yet time and time again, we see the BBC self-conscripting to the role of PR promoter for HRW ‘reports’ without any attempt being made to provide that crucial context.

Last month HRW produced yet another of its reports – this time on the topic of Thai agricultural workers in Israel. Having interviewed less than one per-cent of the total number of Thai nationals employed on Israeli farms (who, like all foreign workers, are of course protected by law), the NGO concluded that it had uncovered “serious abuse”.

Nine days after the publication of HRW’s report, an article appeared in the ‘Features & Analysis’ section of the BBC News website’s Middle East page under the title “Israel’s Thai farmworkers tell of grim plight“. The freelance writer of this article, Camilla Schick (who ironically claims to have done previous work on the issue of ‘churnalism’) makes no attempt to hide the fact that her article is based on the HRW report, with over a quarter of her word-count composed of amplification of its content or quotes from its author. Schick however devoted no words at all to informing readers of her main source’s record of anti-Israel political campaigning.

Another organization promoted, albeit to a lesser extent, in Schick’s report is Kav Laoved – also known as Workers’ Hotline. How Camilla Schick made contact with the mostly anonymous  Thai workers she interviewed for her report and whether or not HRW and/or Kav Laoved played any part in setting up those meetings is not clarified.

One of the main focuses of both the HRW report and Schick’s piece is an issue described in a sub-heading as “Unexplained deaths”. Schick writes:

“One of the most serious allegations concerns a number of farm-worker deaths.

Between 2008 and 2013, 122 Thai nationals died while employed on Israeli farms, according to government figures reported by Israel’s Haaretz newspaper.

The ministry notes 43 of these deaths were due to “Sudden Unexplained Nocturnal Death Syndrome” (Sunds), a rare condition, whose causes are little understood.

A further 22 deaths had no autopsy and were noted as “unexplained”.”

She then goes on to use a phone interview with a Thai worker and quotes from officials from the two NGOs highlighted in her report to suggest that the deaths may be connected to long working hours.

“We’ve severe concerns that many are actually being worked to death, and that the Israeli authorities are not properly investigating the extent to which these deaths may be related to living and working conditions, instead falling back on an excuse that Thai workers are genetically predisposed to cardiac death.”

No attempt is made by Schick to properly explain the subject of SUNDS or to clarify to readers that absent from McGeehan’s CV is evidence of any medical training which would put him in the position of being able to make professional statements on that condition, which is also found among young men of South East Asian descent in other countries. As blogger Elder of Ziyon has already pointed out, HRW’s report includes some very questionable pseudo-medical allegations, which the report’s author has further amplified on social media. 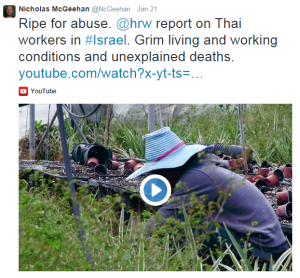 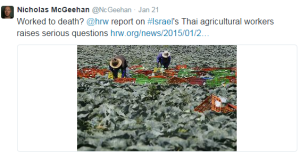 Camilla Schick shows no interest in carrying out any serious journalistic investigation of the allegations made by HRW and in fact her entire report is nothing more than an embellished amplification that NGO’s claims which once again highlights the cosy, symbiotic relationship between the media and politically motivated ‘human rights’ organisations – as portrayed in the tweet below from the author of the HRW report and contributor to Schick’s article. 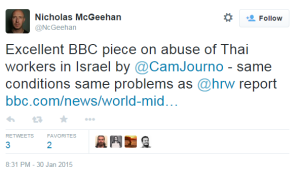 When a BBC article is based on unchallenged repetition of a HRW report and includes input from its author, it is of course to be entirely expected that such ‘journalism’ can be no more than an echo chamber giving publicity to the “same problems”. McGeehan knows that. Schick and the BBC know that. And yet audiences are being led to believe that this is independently sourced impartial news.