The April 22nd edition of BBC Radio 4’s ‘Six O’Clock News’ included an item (from 24:32 here) that began by relating to an event which had taken place a few days earlier in Poland. 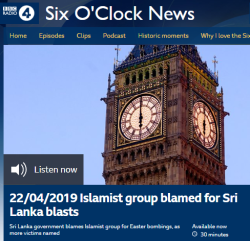 Newsreader: “The World Jewish Congress has condemned an Easter ritual in a town in Poland during which an effigy of Judas Iscariot depicted as an Orthodox Jew was hanged, beaten and burned. Media in the south-eastern town of Pruchnik said the events were a revival of a Good Friday tradition that targets the disciple who’s said to have betrayed Jesus. Here’s our Europe regional editor Danny Aeberhard.”

Aeberhard: “Video footage shows a crude sackcloth Judas stuffed with straw with a large red nose, sidelocks and a black hat, the word ‘traitor’ in Polish daubed on its front. The effigy is battered with sticks by groups of children as it’s dragged through the streets before being burnt. The head of the World Jewish Congress, Robert Singer, called it a ghastly revival of medieval antisemitism.”

Aeberhard did not however conclude his report there. Although the World Jewish Congress is not an Israeli organisation, he chose to spend over half his air time bringing Israel into the story while uncritically re-promoting a highly offensive statement made by the Polish prime minister in February 2018 which the BBC failed to adequately report at the time.

Aeberhard: “Relations between Poland and Israel – in some ways close – have been strained by bitter exchanges over the extent of antisemitism in Poland, linked to a row over the Holocaust. Poland’s prime minister said some Jews had helped perpetrate the Holocaust as well as some Poles. And Israel’s acting foreign minister used a quote from a former prime minister to allege that Poles imbibed antisemitism with their mothers’ milk. The Israeli press has picked up on the Pruchnik Judas ritual which raises the possibility of further less than diplomatic exchanges.” [emphasis added]

The item ended there, with no further information given to listeners regarding that “row over the Holocaust” and no explanation as to why that remark from the Polish prime minister – which has been described as “not only ugly but telling in its deliberate bracketing of the Holocaust’s principal victims with Polish and other Eastern European collaborators” – was widely condemned at the time.

Listeners did learn, however, that any follow-up to the story portrayed at the beginning of the item will be because of “the Israeli press” rather than because of the actions (now apparently under criminal investigation) of residents of a small Polish town.