On January 30th the BBC News website published an article that included the BBC’s response to calls from supporters of the anti-Israel BDS campaign to boycott the upcoming Eurovision Song Contest in Tel Aviv.

Notwithstanding the BBC’s statement on the issue, the following day – January 31st – BBC Northern Ireland’s BBC Radio Ulster decided to air a long phone-in item on its ‘Talkback’ programme hosted by William Crawley. Titled “Is the BBC right to take part in Eurovison being held in Tel Aviv, or should the corporation stay away?”, the item included contributions from journalist/activist Eamonn McCann and historian Ruth Dudley Edwards as well as seven callers. 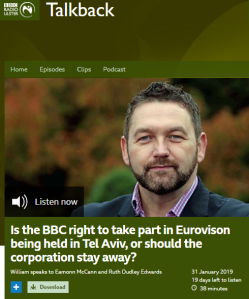 On the hook of the Eurovision Song Contest, listeners heard thirty-eight minutes of mostly unchallenged falsehoods and delegitimisation – often outstanding for their ignorance even by the ‘standards’ of BBC Radio Ulster. [emphasis in italics in the original, emphasis in bold added]

Having informed listeners in his introduction that “Jerusalem is a disputed capital” and after noting the BBC’s statement on the call to boycott May’s event in Tel Aviv, Crawley invited listeners to phone in.

“What do you think? You’re a licence fee payer. Do you think the BBC is right to continue with its role in the Eurovision contest this year or should it boycott the Tel Aviv Eurovision?”

Crawley then asked his guest Eamonn McCann – introduced as a “journalist and former ‘People Before Profit’ MLA [member of the legislative assembly]” and a supporter of “the boycott movement” – to “lay out the case for the boycott first”.

McCann began by promoting a popular but inaccurate myth according to which the BDS campaign was initiated by Palestinians.

McCann: “well the boycott movement – BDS boycott, divestment and sanctions – that was set up in 2005 yes and that was the year after and it was a response to the publication of an opinion of the International Court of Justice about the legality of the apartheid wall – or separation wall as the Israelis call it – and the associated settlement figures. Now the BDS movement arose, endorsed by more than 60 civil society organisations that are from…of Palestinians and a…the actual…its manifesto said that they wanted a boycott of Israel – quote – until it meets its obligations under international law and that was spelled out by the BDS movement at the beginning as ending its occupation and colonisation of Arab lands, recognising the fundamental rights of Arab Palestinian citizens to full equality and respecting protection and promoting the rights of Palestinians to return to their homes. Now that’s the aim of it. It is an entirely peaceful sort of movement. Indeed it was formed because previously we had a sustained violence and nothing else – nothing else. The BDS movement couldn’t stop the violence of the resistance of Palestinian people, particularly in Gaza, but it said here is a non-violent way of engaging international support and trying at last to pressure the Israelis into abandoning what is an apartheid system. That’s what’s happening here: apartheid in the 21st century. And just as we had a boycott of apartheid South Africa, we should now certainly not be presenting Israel as a sort of normal state where light entertainment and progressive thought flourishes. That is to deny – implicitly to deny – the reality under which the Palestinian people live. Therefore boycott it.”

Making no effort to challenge McCann’s repeated ‘apartheid’ smear, to point out that the ICJ opinion has no legal standing or to clarify that ‘Arab lands’ also means Israel and ‘right of return’ means the end of the Jewish state, Crawley went on to quote the BBC’s statement once again before introducing Ruth Dudley Edwards whom he promptly interrupted with the following dubious claim:

When Dudley Edwards went on to note that the “BDS movement is being used to help demonise Israel, delegitimise it”, Crawley jumped in:

Crawley: “Why are you bringing up antisemitism?”

After explaining that some of those behind the BDS campaign are driven by antisemitism and that the so-called ‘right of return’ means “the rights of 8 million people who hate Israel to come and live in Israel” because of the hereditary aspect of Palestinian ‘refugee’ status, Dudley Edwards clarified that “the objective is to destroy Israel”.

McCann: “If they say…if Nelson Mandela says that looks like apartheid then I think that he knows a wee bit more about apartheid than either Ruth or myself and I’m gonna take his word for it.”

McCann proceeded to interrupt Ruth Dudley Edwards as she tried to describe the terrorism faced by Israelis and then went on:

McCann: “They’re not dealing with rockets every day of the week. In fact the number of rockets being fired from Gaza or anywhere else is very small – tiny, infinitesimal – compared to the firepower being directed by Israel against the Palestinian people. That is why in terms of deaths […] We can watch on our televisions and actually see heavily armed members of the Israeli Defence Forces shooting – aiming and shooting down – and shooting in the back young Palestinians. Some of them might be carrying stones – it’s all they have – and sling shots like David had to use against Goliath. That’s what you see now.”

Crawley made no effort to inform listeners that the “infinitesimal” number of rockets and mortars launched from Gaza at Israeli civilians in 2018 was one thousand or that “stones” are obviously by no means “all they have” seeing as hundreds of attacks with IEDs, grenades and firearms have been carried out in the past year alone. Neither did Crawley react when Mc Cann went on to claim that “there’s slaughter going on there” before once again invoking the political NGOs Amnesty International and Human Rights Watch.

During the phone-in part of the item listeners heard from seven callers – all male – three of whom were against boycotting the Eurovision and four in favour. Many of the lies and distortions promoted by those callers went unchallenged.

Crawley made no effort to clarify to listeners that “the Palestinians” never had an independent state with “power and the government and the structure”. Neither did he bother to inform his audience – and his caller – that denying the Jewish people their right to self-determination is considered antisemitism according to the IHRA definition that is used by the British government.

Listeners also heard from McCann on the topic of Israel’s existence.

McCann: “I don’t accept its right to exist as it’s presently constituted. Israel is a settler state.”

They also heard him opine on the rights of the LGBT community in Israel.

Crawley: “Would you also accept that LGBT rights are more protected in Israel than any other country in that region?”

Caller 4 also promoted the lie that “Israel is an apartheid state” with no challenge from Crawley, as did caller 5.

Caller 5: “Israel is an apartheid state – much more even than South Africa. […] What happened in Israel shouldn’t be happening. All those people were moved off their land over the last 60 – 70 years. 100 years ago there was Jewish people living in what is now Israel, living then in peace and it’s only when they became, I suppose, a force that they then started moving in on Palestinian villages. […] Israel should be ostracised worldwide…as long as Israel is doing what they’re doing – slaughtering the people.”

While the level of most of the ‘discussion’ heard in this programme is frankly jaw-dropping, it is acutely obvious that its presenter – despite the BBC’s public purpose obligation to educate and inform – was perfectly content to let historical and current affairs related inaccuracies go unchallenged along with the repeated falsehoods – and in particular the ‘apartheid’ smear – that were clearly intended to delegitimise Israel and curry support for the BDS campaign.

And so, not for the first time ,we see that unfettered defamation, demonisation and delegitimisation of Israel – along with promotion of the antisemitic denial of the Jewish people’s right to self-determination – gets a free pass on BBC Northern Ireland radio stations.