BBC World Service radio has a programme called ‘Focus on Africa’ which purports to provide listeners with “reports and analysis of the day’s political, economic and sports news from across Africa”. The programme includes a section titled “Art from Focus on Africa” where audiences can “listen to interviews, news and reviews of arts from Africa” and indeed most of the items in that category relate to African artists and performers.

On March 2nd however the programme included an interview (which was also promoted separately on social media) with a writer who is not from Africa. The synopsis to that clip reads:

“Tens of thousands of illegal migrants from Africa live in Israel, many of whom come from Eritrea and Sudan.

What kind of story might unfold if an Israeli citizen becomes involved with one of those migrants? What challenges might they face personally and socially?

These are questions explored by Israeli author Ayelet Gundar-Goshen in a new novel called Waking Lions.

She has been telling BBC Africa’s Mary Morgan more about the book’s central character.”

Much of the item relates to Gundar-Goshen’s novel about what she describes as a “Left-wing liberal doctor who votes for the right party” but is “completely unaware of the fact that he’s actually a racist”. However at one point presenter Mary Morgan takes the conversation away from fiction:

“How do you think most Israelis feel about and interact with African migrants?”

Listeners then hear the following assertion from Gundar-Goshen:

“Well I think most Israelis interact with African migrants but they just don’t think about it. It’s the people who clean our houses. It’s the people who clean our table. Israel is a very white society. It’s not like here. So almost all the black people that you meet are illegal refugees and I think things that will sound racist here are not even considered racist in Israel. Like the sentence when he [the novel’s main character] says ‘they all look the same for me’. I think to your eyes like this is like someone would never even dare to say. This is something that you say only inside your heart. And in Israel this is actually something that you could say and be OK.” [emphasis added]

The claim that “Israel is a very white society” can of course only be made if one ignores the fact that as of 2009, 50.2% of Israeli Jews were of Mizrachi or Sephardi background with origins in Africa and Asia. It can only be made if you ignore the 1.5% of the Israeli population of Ethiopian descent along with the Israelis with roots in places such as Yemen and Cochin, the African Hebrew Israelite community, around 10,000 black Bedouin of African descent and additional sections of Israeli society.

The BBC World Service did manage to ignore all that – with the result that listeners were fed information which, whilst it may well serve the purpose of promoting the interviewee’s work of fiction, certainly leaves them with a distorted and inaccurate view of the facts concerning a country which is actually far more diverse than “here” – i.e. the UK.

Here’s a heart-breaking story which was broadcast on BBC World News television and promoted on the Middle East and Africa pages of the BBC News website on April 24th under the title “Ethiopia’s Jewish community divided“. 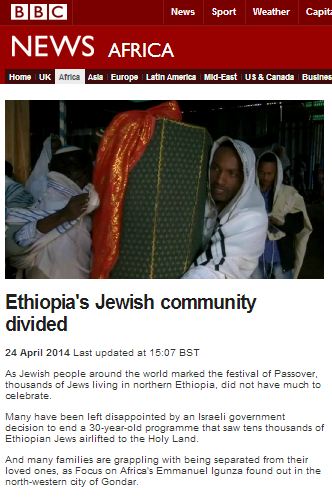 “Shouts of praise for the holy scrolls but make no mistake; this is not Israel. Welcome to Gondar – an ancient historic city in northern Ethiopia and home to the Falash Mura: the last Jews of Ethiopia.

They spend their days living according to Jewish tradition, passed onto them over hundreds of years. The tranquility here betrays the emotional turmoil that many feel, not able to join their families in Israel. Stories of siblings separated, children allowed to settle in the Jewish homeland while their parents remain behind. Under the Israeli government criteria, only those Falash Mura who can show evidence of Jewish ancestry on their mother’s side are allowed into Israel and granted citizenship.

The Jewish community here is big, numbering thousands, and right now they’re having one of their prayer sessions. But there has been disappointment in Gondar. Many hold the cherished idea of travelling to Israel but have not. But there is also a strong sense of determination to keep their faith strong and to make their lives much better.

Abamesh Takiv [?] is a project manager with a local NGO helping poor Ethiopian Jews. Like many who she lives and works with, Abamesh wants to join her family in Israel.

‘Our family was registered fifteen years ago to go to Israel. My entire family from my father’s side has gone and it is only me and my father who have remained. We really, really want to go. We have not given up hope. We continue to live in hope.’

More than five thousand Ethiopian Jews living in Gondar say they have relatives in Israel, but their attempts to go back to what they call their spiritual home have been futile. Last year Israeli authorities announced that they had completed the last major airlift of Ethiopians seeking a new home in Israel. But many here still pray for divine intervention for that day when they will be reunited with their families.”

The problem with Emmanuel Igunza’s story is that he has left out some very critical details, the most obvious one being that the Falash Mura are Christians whose Jewish ancestors were converted by Western missionaries from around the end of the nineteenth century.

Notably, in past articles concerning the Falash Mura, the BBC has reported the issue accurately. In this article from 2000, it states:

“They belong to the Falash Mura community – Jews who converted to Christianity generations ago.”

“The Falash Mura’s ancestors converted to Christianity under pressure in the 19th Century and so are not eligible to emigrate under Israel’s Law of Return.”

Another article from 2013 states:

“The Falash Mura’s ancestors converted to Christianity under pressure in the 19th Century.”

Emmanuel Igunza, however, chooses to conceal from audiences the very issue which is at the root of the whole story and even takes it upon himself to define the religion of the people who are the subject of his report.

That enables him to turn the story into one of poor Ethiopian Jews rejected by Israel: an obviously superficial portrayal of a much more complex issue with which Israel has been wrestling for many years.

The framing of this story is of course particularly notable in light of other BBC reports on the Ethiopian community in Israel, not least the one by Paul Bakibinga which preceded Igunza’s item by a mere five days. Past BBC reports have not infrequently used the topic of the Ethiopian community as a hook upon which to hang none too subtle insinuations of Israel as a racist society which discriminates against immigrants from Ethiopia – see for example here and here. Now Emmanuel Igunza shows us that even Ethiopians in their native land can be used for the purpose of similar framing – just as long as certain crucial facts are made to disappear.