Last week BBC Radio 5 Live broadcast an interview with a doctor from ‘Medecins du Monde’ who inaccurately claimed that the shortage of medicines and disposables in Gaza Strip hospitals is attributable to Israeli policies.

“As you know we are under siege for a long time in Gaza and this affects the medical parts in Gaza and there is a lack of disposables and basic drugs needs in emergency. We need really, really action from the world for intervention to help people in Gaza.”

Despite that previous failure to adhere to BBC editorial guidelines on impartiality and despite the fact that Dr Hosam Abu Elwan’s claim was – like sadly too many of the claims made by medical staff in Gaza Strip at present – clearly political in motivation, on July 29th the same radio station saw fit to invite the doctor to speak again and his report– appearing on a dedicated webpage – was promoted on the Radio 5 Live official Twitter account.

The version of this ‘report’ promoted by BBC Radio 5 live on Twitter and on the dedicated webpage lacks all context and clearly plays exclusively on the emotions of listeners who cannot possibly discern from it whether the dead are civilians or combatants or in what circumstances – or by whom – they were killed.

The term ‘murder’ – used no fewer than five times in the 77 second-long report, twice on the webpage and twice in the Tweet – has a specific meaning in the English language which attributes intention and premeditation – as this programme’s UK listeners will know. As someone for whom English is not a first language, Dr Abu Elwan may perhaps not be aware of that nuance, but the editors of this item most definitely should be and hence their decision to air and promote such a recording as a raw, stand-alone item and to use the word ‘murder’ as part of their promotion clearly calls editorial standards of impartiality into question.

We previously discussed here one of the first results which appear when an internet search is carried out for information on the Six Day War complied by the BBC. Another result appearing on the first page of search results is the backgrounder below, dating from 2008.

The item opens with a curious one-liner which, it seems, is the BBC’s account of post-Suez crisis Middle East events.

“The Israelis had used the 10 years since the Sinai invasion to build up their air force.”

Of course contrary to the impression given by the BBC, all had not been quiet during those ten years and Israel had good reason to maintain and strengthen its armed forces in light of factors such as the repeated threats against it made by members of the Arab League, that organisation’s plan to divert the headwaters of the Jordan River and its establishment of the PLO in 1964. The article goes on:

“When Egypt’s President Nasser asked for the UN monitoring force in the Sinai to be removed, sent an army there himself, closed the Straits of Tiran (blockading Eilat again) and called for Arab action against Israel, the Israelis saw this as a cause for war.”

Did Nasser really ‘ask’ UNEF to leave the Sinai? Any accurate account of events would have to use a distinctly more decisive verb.

“Calls for UNEF’s withdrawal were reintroduced at the Arab League Conference in April 1967. The president of the United Arab Republic (UAR), Gamal Abd al-Nasser, did not immediately move to dislodge the UN force, yet it was obvious that if the UAR was to retain its self-assumed position of leadership among the Arab world, more was needed than just words alone. To this end, the Syrian-UAR Mutual Defense Pact was reaffirmed and an offer was made to provide the Syrian Air Force with Egyptian MiG 21s. […]

The message to withdraw UNEF was first conveyed to the commander of UNEF, Major General Indar Jit Rikhye, on May 16, 1967. The UAR Liaison Officer, Brigadier General Ibrahim Sharkawy, called Rikhye in the afternoon to inform him that a special envoy would be arriving with an important message for the UNEF commander. The letter–delivered by a courier holding the rank of brigadier general–was from the UAR Chief of Staff, Lieutenant General Muhammad Fawzy, and simply stated:

‘I gave my instructions to all UAR armed forces to be ready for action against Israel, the moment it might carry out any aggressive action against any Arab country. Due to these instructions our troops are already concentrated in Sinai on our eastern border. For the sake of complete security of all UN troops which install outposts along our borders, I request that you issue your orders to withdraw all these troops immediately.’ “

“In the evening of 16 May, the UNEF Commander received a request from the Egyptian Commander-in-Chief of the armed forces for withdrawal of “all UN troops which installed OP’s [observation posts] along our borders”. The General who handed the message to the Force Commander told him that UNEF must order immediate withdrawal from El Sabha and Sharm el Sheikh, commanding the Strait of Tiran and therefore access to the Red Sea and southern Israel. […]

The Secretary-General met with members of the UNEF Advisory Committee and told them of the events in the field, making it known that if a formal request for UNEF’s withdrawal came from the Egyptian Government he would have to comply. He pointed out that the Force was on Egyptian territory only with the consent of the Government and could not remain there without it. [..]

The fundamental fact is that United Nations peacekeeping operations are based on the principle of consent. To maintain UNEF in Egypt against the will of the Egyptian Government, even if it had been possible to do so, which was not the case, would have created a dangerous precedent which would have deterred potential host Governments from accepting future United Nations peacekeeping operations on their soil.”

In other words, the terms of UNEF’s deployment in Sinai were conditional upon Egyptian agreement to their presence and so when Nasser “asked” the UN to leave – as the BBC phrases it – he was in fact ordering UNEF to go.

According to the BBC’s account above, it was “the Israelis” who interpreted the removal of UNEF forces from Sinai, the build-up of Egyptian troops there and the closure of the Straits of Tiran and the accompanying threatening rhetoric from assorted Arab leaders as “a cause for war”.

However, the records show that not only the Israeli government perceived the actions of Egypt and its allies as a build-up to an invasion of Israel. On May 20th 1967 the UN Secretary General U Thant wrote:

“I have felt it to be an obligation to submit this report in order to convey to members of the Council my deep anxiety about recent developments in the Near East and what I consider to be an increasingly dangerous deterioration along the borders there. […]

I am very sorry to feel obliged to say that in my considered opinion the prevailing state of affairs in the Near East as regards relations between the Arab States and Israel, and among the Arab States themselves, is extremely menacing. […]

A number of factors serve to aggravate the situation to an unusual degree, increasing tension and danger. […]

El Fatah activities, consisting of terrorism and sabotage, are a major factor in that they provoke strong reactions in Israel by the Government and population alike. Some recent incidents of this type have seemed to indicate a new level of organization and training of those who participate in these actions. […]

Intemperate and bellicose utterances by other officials and non-officials, eagerly reported by press and radio, are unfortunately more or less routine on both sides of the lines in the Near East. In recent weeks, however, reports emanating from Israel have attributed to some high officials in that State statements so threatening as to be particularly inflammatory in the sense that they could only heighten emotions and thereby increase tensions on the other side of the lines. […]

I do not wish to be alarmist but I cannot avoid the warning to the Council that in my view the current situation in the Near East is more disturbing, indeed, I may say more menacing, than at any time since the fall of 1956.”

Two days after U Thant wrote those words and whilst he was en route to Cairo, Egypt closed the Straits of Tiran: a move which was a clear casus belli and which was condemned by the American president. On June 19th 1967 – just after the war had ended – Lyndon Johnson stated:

“If a single act of folly was more responsible for this explosion than any other it was the arbitrary and dangerous announced decision that the Strait of Tiran would be closed. The right of innocent maritime passage must be preserved for all nations.”

Having implied to readers that Israel had prepared itself in advance for the Six Day War and chosen to launch it on the basis of debatable interpretations of the actions of the other side, the BBC article goes on to state: 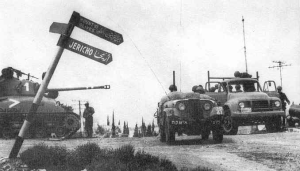 “They [Israel] launched their air force with devastating effect in a pre-emptive strike against Egypt and followed up with victories over Jordan and Syria. The war ended after six days, with Israel in control of the Sinai, Gaza, the West Bank, the Golan Heights and Jerusalem.”

No mention is made of the fact that Jordan was informed on June 5th by the Israeli prime minister that if it stayed out of the hostilities, no action would be taken against it and neither is it noted that Syrian air attacks on civilian targets in Tiberias and Haifa preceded Israeli action on the northern front.

“But despite Israeli jubilation, the war did not settle the issue between Israel and its neighbours and the Palestinians.

It led to Security Council resolution 242, the basis of subsequent efforts to trade land for peace. The resolution called for an Israeli withdrawal from “territories occupied in the recent conflict” and for all states in the region to be able to “live in peace within secure and recognized boundaries”. It also led to Israel beginning the settlement of the “territories occupied”. “

Significantly, that conclusion does not include any reference to the Israeli offers of ‘land for peace’ with Egypt and Syria which immediately followed the war or to the ‘three nos’ of the Khartoum Declaration.

“The Arab Heads of State have agreed to unite their political efforts at the international and diplomatic level to eliminate the effects of the aggression and to ensure the withdrawal of the aggressive Israeli forces from the Arab lands which have been occupied since the aggression of June 5. This will be done within the framework of the main principles by which the Arab States abide, namely, no peace with Israel, no recognition of Israel, no negotiations with it, and insistence on the rights of the Palestinian people in their own country.”

With the BBC basing so much of its Middle East reporting upon a version of history which begins with the Six Day War and ignores much of what went before that event, it is clearly vital that audiences should understand its background and build-up. This backgrounder fails to provide a coherent, accurate and impartial account of events before, during and after the hostilities and yet it has remained on the BBC website for over six years.