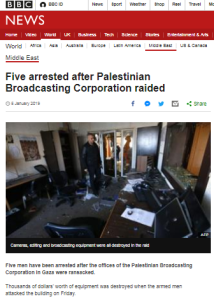 Relating to an incident which had taken place in the Gaza Strip the previous day, the article informed readers that:

“Five men have been arrested after the offices of the Palestinian Broadcasting Corporation in Gaza were ransacked.

Thousands of dollars’ worth of equipment was destroyed when the armed men attacked the building on Friday.

The broadcaster is funded by the Palestinian Authority (PA), which is dominated by the Fatah faction.

Staff initially blamed the raid on the faction’s rivals Hamas, which controls Gaza, but the Islamist group said unhappy PA employees carried it out.”

The report went on:

“The five men who have been arrested are “employees of the Palestinian Authority whose salaries have been cut recently,” the Hamas-run interior ministry in Gaza said in a statement.

“It turned out that one of them was a Palestine TV employee whose salary was cut last month,” it added. […]

The interior ministry said an investigation had been carried out and the men had been identified by surveillance footage and were all members of Fatah.”

The BBC did not explain to its readers how that latter claim squares with other reports from the PA news agency alleging that the attackers had been masked.  Allegations of additional attempted detentions of Fatah linked officials by Hamas were not mentioned and neither was the reported decision by Fatah to close down offices in the Gaza Strip.

The Jerusalem Post reported an apparent additional development hours before this BBC article was published.

“The Palestinian Authority has decided to stop paying salaries to hundreds of Palestinians in the Gaza Strip, including many Fatah members, sources said on Friday.

Palestinians see the move in the context of PA President Mahmoud Abbas’s punitive measures against Hamas and his critics in Fatah. These measures were taken last year in response to Hamas’s refusal to hand over full control of the Gaza Strip to Abbas’s Ramallah-based government. […]

Abbas, who is currently visiting Cairo, told Egyptian journalists and writers on Friday night that he was considering halting the monthly PA funds that are earmarked for the Gaza Strip and which, he said, were estimated at $96 million. […]

One Palestinian source told The Jerusalem Post that the latest PA move will affect 169 Palestinians believed to be affiliated with deposed Fatah official Mohammed Dahlan, an outspoken political opponent and critic of Abbas. […]

Another source said that dozens of former Palestinian security prisoners held in Israeli prison have also been told that they will no longer be receiving their salaries from the PA. Most of the former prisoners are affiliated with Hamas and Islamic Jihad, but were nevertheless on the payroll of the PA, the source explained. […]

In another sign of mounting tensions between the two sides, Fatah announced that it has decided to close all its offices in the Gaza Strip in protest against Hamas “threats” and “harassment.””

At the end of the BBC’s article readers were told that:

“The two factions [Fatah and Hamas] have been at odds since Hamas seized control of Gaza in a brief but violent battle in 2007.

In October 2017, the rivals signed a reconciliation deal that was meant to see Hamas hand over administrative control of Gaza to the PA, but disputes have delayed the deal’s full implementation.”

Meanwhile, the BBC News website’s ‘Palestinian territories’ profile continues to mislead audiences with the inaccurate claim that “a government of national unity assumed control of Gaza public institutions in October 2017”.

Readers may recall that back in 2016 we noted the existence of a project run by the BBC’s international development charity ‘BBC Media Action’ and BBC Arabic in partnership with the Palestinian Broadcasting Corporation (PBC) between 2012 and 2016.

“The Palestinian Broadcasting Corporation (PBC) is controlled by the Palestinian Authority and its television (PA TV) and radio (Voice of Palestine) stations are the PA’s official media channels.

…both those stations have a long record of broadcasting material which negates Israel’s existence (including on children’s programmes), glorifies terrorism, spreads incitement, promotes antisemitic tropes and hate speech, propagates falsehoods about Israel and denies and distorts the Holocaust.”

A blog post written in 2013 (which includes a shout-out to Manal Tamimi – known for her Tweets lauding and encouraging Palestinian violence) by a person who was at the time employed at the BBC Media Action Ramallah office as a social media specialist states that in addition to producing content together with the PBC, the BBC charity also helped the corporation expand its presence on social media.

Recently two senior PBC officials provided some background (translated by Palestinian Media Watch) concerning the goals of the TV station with which BBC Media Action found it appropriate to collaborate over a period of several years. 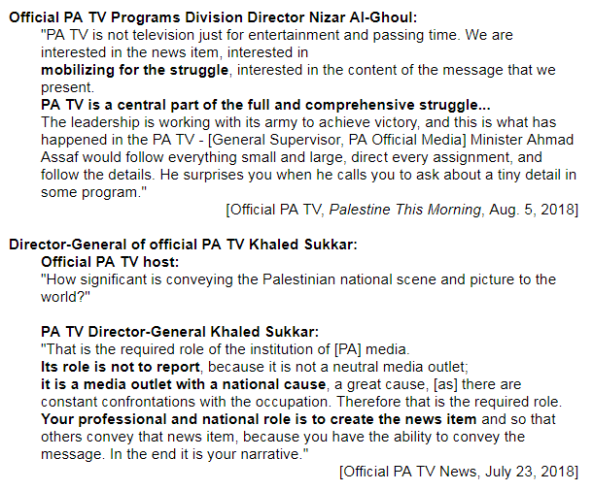 In other words, a TV station that is described by its director as “a media outlet with a national cause” and portrayed by one of its senior executives as “a central part of the…struggle” was nevertheless chosen to partner a BBC charity funded to no small extent by the UK tax-payer.

The BBC, the British Council and BDS: what Simon Cox didn’t report

The BBC World Service, the partner radio station and the terror-glorifying cartoon

The Palestinian Broadcasting Corporation (PBC) is controlled by the Palestinian Authority and its television (PA TV) and radio (Voice of Palestine) stations are the PA’s official media channels.

As is regularly documented by Palestinian Media Watch (PMW), both those stations have a long record of broadcasting material which negates Israel’s existence (including on children’s programmes), glorifies terrorism, spreads incitement, promotes antisemitic tropes and hate speech, propagates falsehoods about Israel and denies and distorts the Holocaust.

One might therefore assume that for organisations from liberal Western countries, the Palestine Broadcasting Corporation would not meet the required criteria for partnership on joint projects – but that is apparently not the case.

The BBC’s international development charity ‘BBC Media Action’ is officially “legally, financially and operationally independent from the BBC” although according to its website, some of its trustees are also BBC employees. It does not receive funding from the licence fee “except through the provision of office space and a small donation from BBC World Service to support co-production of content with their language services” and the majority of its income is provided by DfID – the UK government’s Department for International Development.

Despite the Palestinian Broadcasting Corporation’s record, BBC Media Action (in collaboration with licence fee funded BBC Arabic) began partnering it in 2012. The charity claims to be “promoting accountability” through the governance projects – of which that partnership is one – and states that:

Clearly the investment by British tax-payers did not have that effect upon the Palestinian Authority, which continues to promote hate, incitement and glorification of terrorism (mostly unreported by the BBC) via BBC Media Action’s partner the Palestinian Broadcasting Corporation.

The BBC, the British Council and BDS: what Simon Cox didn’t report

The BBC World Service, the partner radio station and the terror-glorifying cartoon