A BBC World Service Tweet advertising a radio programme about Yiddish caused quite a stir on January 3rd. 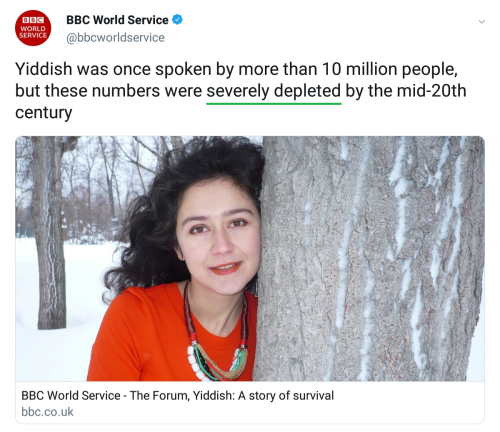 Such crass euphemism is fortunately absent from the programme itself – “Yiddish: A story of survival” – and its synopsis states:

“At its height, Yiddish, the language of the European Jews, was spoken by more than ten million people, from Russia in the east to the Netherlands in the West. But by the mid -20th century, these numbers were severely depleted following the Holocaust, and then the creation of the modern-day state of Israel where the speaking of Yiddish was discouraged.”

From 20:35 listeners to the programme get a more comprehensive explanation of “the factors that led to the demise of Yiddish around the mid-twentieth century” from one of the programme’s contributors.

That of course raises the question of whether whoever was operating the BBC World Service Twitter account at the time actually bothered to listen to the programme or at least read its synopsis before composing that miserable Tweet.

A filmed report which appeared in the ‘features’ section of the BBC News website’s Middle East page on May 19th under the title “The deafblind actors of Jaffa” is about the Na Laga’at theatre company.

“A theatre company made up of deafblind actors is pulling in the crowds in Israel.

Every performer in the Nalaga’at theatre company, which means “Please Touch” in Hebrew, has Usher syndrome so they are both deaf and visually impaired.

The performances are told through speech and sign language and cues are given to the actors by a drumbeat so they can feel the vibrations.

The BBC Travel Show’s Rajan Datar went behind the scenes at the theatre in Jaffa to find out more.”

In addition to the fact that the presenter repeatedly mispronounces the theatre company’s name, the report opens by telling BBC audiences that:

“Jaffa is one of the world’s oldest sea ports. The majority of the locals are Arab, but these days, especially on its revamped water front, it’s becoming a gentrified haven for international tourists and day-trippers from neighbouring Tel Aviv.”

Jaffa – or Yaffo – lies in the Tel Aviv-Yaffo municipality where it is classed as district 7. Data found on the municipality’s website shows that in 2014 Jaffa had a population of 47,580 – 71% of whom were Jews and others and 29% of whom were Arabs.

There is no evidence to indicate that since 2014 the Arab population of Jaffa has become “the majority” as the BBC Travel Show claims.