Eighteen months have passed since the BBC last reported on the topic of the sick and wounded Syrians receiving medical care in Israel and so its audiences may not be aware of the fact that the provision of that humanitarian aid continues.

One of the patients arriving at the border earlier this year presented a particular challenge to the medical teams.

Some two weeks after she arrived at the hospital, after her wounds had nearly healed, Rambam doctors discovered the young girl had cancer.

They refused to release her, insisting that they could not let her cancer go untreated. […]

And so a search began for a bone marrow donor, a search that led to a relative living in a Middle Eastern country designated an “enemy state” under Israeli law, a designation that prevented the relative from entering Israel.

It was at this point that Israel’s security services stepped in, mounting a secret operation in the enemy country that helped smuggle the relative out of that country and into Israel.”

The treatment was successful and this week the little girl was discharged from hospital.

“Rambam Health Care Campus has treated 140 Syrian civilians, men, women and children over the past three years. However, the departure, yesterday, of a six-year-old girl, “B”, was especially emotional for everyone.  Wearing a white dress, white shoes, and a little silver crown, “B” was the guest of honor at a farewell party held by an entire department, where Jews, Muslims, Christians, and Druze stood together with tears in their eyes, surrounding her with love and concern for the future that awaits her. […]

After all the parting messages, some of which were painstakingly read in Arabic by Jewish doctors and nurses, the mother asked to read her own thank you wishes. In a small voice, she said “I would lie if I said that I expected the kind of humanity I discovered here. I am grateful for your care and sensitivity; may God protect you. And we will always remember what you did for us.””

To date, BBC audiences have not been told this unusual story.

As regular readers will be aware, promotion of the ‘apartheid’ trope is not infrequently seen in BBC content relating to Israel.

The film below was made in Haifa’s Rambam hospital but it is also representative of other Israeli medical institutions.

A media organisation truly committed to enhancing its “audiences’ awareness and understanding of international issues” would of course tell those stories too.

On February 16th the BBC broadcast and published several reports by Paul Adams on various platforms – all of them telling the story of a Syrian man who received medical treatment in one of Israel’s hospitals. 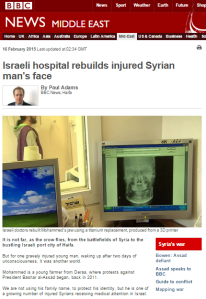 On the BBC News website’s Middle East page readers found a report titled “Israeli hospital rebuilds injured Syrian man’s face“. On the same page a filmed report – also broadcast on television news programmes – appeared under the headline “Syria war victim given new jaw in Israel” and two additional filmed reports (here and here) were also available. An item on the same topic appeared in the BBC World Service radio programme ‘Newshour’ (from 17:38 here) and a version of that audio report was also promoted separately on Twitter.

In several of the otherwise largely reasonable reports Adams tells BBC audiences that:

“Syrian patients started arriving in Israel soon after the war began. They’re now a common sight in hospitals like Rambam.”

In fact, whilst the uprising in Syria began in March 2011, it was only almost two years later – at the beginning of 2013 – that the first of the wounded arrived on the Israeli-Syrian border. Since then, thousands of Syrians have been treated in Israel – although the BBC’s coverage of the topic has been sparse (see related articles below) and these are the first reports on the subject since November 2013. That makes it all the more unfortunate that Adams’ extensive reporting did not also inform audiences about other aspects of the story such as the existence of an IDF field hospital in the Golan Heights and the fact that the cost of the treatment for thousands of Syrians there and in civilian hospitals (over 33 million shekels the latter establishments alone as of October 2014) is borne by the Israeli tax-payer.

Adams’ reports all inform audiences that his interviewee was scared when he found himself in Israel and that for all the Syrian patients arriving in Israel “it’s a journey into the unknown”. He does not, however, approach the topic of the Syrian state-sponsored propaganda which was the root cause of their views of Israel before they saw it for themselves.

“Well, if you drive about an hour and a half west from Haifa, you come to this place: the wind-swept Israeli-occupied Golan Heights.”

Of course if you drive about an hour and a half west from Haifa (or even a lot less), you’ll actually end up in the Mediterranean Sea: the Golan Heights are to the east/north-east of Haifa.

At last: an accurate and impartial BBC report on Syrian patients in Israel

Northern exposure: what the BBC isn’t reporting about the Israel-Syria border