BBC coverage of last week’s escalation of violence during which terror groups in the Gaza Strip fired 690 rockets at civilian communities in Israel included an item aired in the May 5th afternoon edition of the BBC World Service programme ‘Newshour’, hosted by James Menendez. 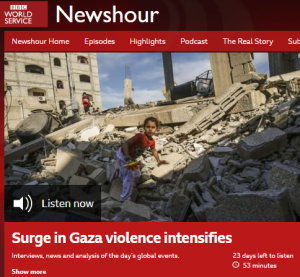 The item (from 00:10 here) commenced with analysis from Alan Johnston who referred to a “deal” brokered by the Egyptians to bring an end to the previous exacerbation in March which he described as including:

Making no effort to inform listeners why that blockade was put in place or how Palestinian Authority actions and Hamas’ prioritisation of terrorism over civilian well-being have contributed to the current state of affairs in the Gaza Strip, Johnston went on to amplify the narrative promoted by Gaza Strip based terror groups.

“Hamas and the Islamic Jihad militants in Gaza are unhappy with the Israelis for not implementing that…their side of the deal. That’s the Palestinian Gazan view of the situation.”

Johnston’s contribution ended there, with listeners hearing nothing at all about the Israeli “view of the situation” – including the rocket fire days earlier (unreported by the BBC) which brought about a reduction of the fishing zone or the fact that Israel disputes the claims made by Gaza Strip terror groups concerning the delay of transfer of cash from Qatar.

With that one-sided framing in place, Menendez introduced another ‘analyst’ at 04:08.

Menendez: “Well Tareq Baconi is an analyst with the non-profit International Crisis Group. He’s based in Ramallah in the West Bank. He’s also the author of ‘Hamas Contained: The Rise and Pacification of Palestinian Resistance’. Why does he think the violence has flared up again now?”

Despite the BBC having editorial guidelines which stipulate that audiences should be informed of the “particular viewpoint” of contributors, listeners were told nothing of the International Crisis Group’s (ICG) record, agenda and funding – including its receipt of donations from Qatar which are obviously relevant to the story, given that country’s history of support for Hamas.

Neither were listeners informed that Tareq Baconi – formerly a Policy Fellow with Al Shabaka – has repeatedly made his own position on Hamas clear, including in his book:

“Hamas rules Gaza and the lives of the two million Palestinians who live there. Demonized in media and policy debates, various accusations and critical assumptions have been used to justify extreme military action against Hamas. The reality of Hamas is, of course, far more complex. Neither a democratic political party nor a terrorist group, Hamas is a multifaceted liberation organization, one rooted in the nationalist claims of the Palestinian people.” [emphasis added]

Obviously that information would have been critical in helping audiences reach informed opinions about the one-sided talking points they were about to hear but rather than providing it, the BBC chose to present Baconi’s contribution as impartial analysis. Like Johnston, Baconi presented just one explanation for the “quite dire” situation in the Gaza Strip, erasing Hamas terrorism and inter-factional Palestinian disputes from the picture.

Baconi: “I think the cause is that there are fundamental demands that the Palestinians in Gaza are requesting that Israel abide by – namely the humanitarian suffering and the economic situation in Gaza – and by virtue of the blockade the situation in Gaza continues to be quite dire. So often these escalations are ways for the Palestinian factions in the Gaza Strip to pressure Israel into abiding by its side of ceasefire agreements. We can pinpoint the specific reason for this latest escalation. There are several things that are happening. The Eurovision contest is happening next week and we’re coming up to milestones and anniversaries that are quite full of emotion for Palestinians: Nakba of course on May 15 which is the same day that Israel celebrates its Independence Day. And domestically within Israel Netanyahu is currently in discussions to form a new coalition government.”

Menendez: “I mean is there any reason to think from the Palestinian point of view that doing this will bring that relief that they want, that at the moment they have any greater leverage – because it doesn’t look like it, does it?”

Listeners heard nothing about the context to the counter-terrorism measure which is the blockade and they were wrongly led to believe both that Israel has made agreements with “the factions in Gaza” and that the terms of understandings in fact brokered by third parties “never translates into action”.

Baconi: “Well the issue that we need to remember here is that Israel has historically – certainly over the course of the last decade since the blockade was first imposed on the Gaza Strip but definitely over the course of the past year or so – it has shown that it only really responds to force. It has reinforced that message time and again. It’s only when Hamas and other factions fire rockets at Israel that Israel countenances taking any measures that might relieve the suffering in the Gaza Strip. Even though every kind of ceasefire agreement between Israel and the factions in Gaza have been predicated on the simple understanding that there will be calm in Israel’s southern communities if the situation in the Gaza Strip changes, that never translates into action so while Hamas and other factions do restrain any kind of activity from the Gaza Strip, Israel never responds by meeting its obligations under a ceasefire. So really whether or not Hamas has more of a chance now is unclear but that’s sort of beside the point because it’s unclear what other measures Hamas has. If the Gaza Strip isn’t a source of rocket fire, it’s forgotten from Israel’s perspective and the collective punishment of two million Palestinians sort of becomes acceptable or forgotten.”

Menendez had nothing to say about Baconi’s promotion of the “collective punishment” myth but went on to describe terror groups that launch military-grade rockets at civilians as “militants”.

Menendez: “Is there a danger then, if the Palestinian militants feel that they’ve got nothing to lose at this stage, that we could be on the brink of another big conflagration as we saw, what, in 2014?”

Baconi: “Absolutely. I think that’s always a danger. I think neither Hamas nor Israel wants an escalation which is what’s so ironic about this dynamic. The dynamic keeps repeating itself every few months but neither party necessarily wants an escalation. Hamas certainly; it rightly believes that any escalation will be hugely destructive for the Gaza Strip in terms of the loss of life – certainly civilian life – but also in terms of infrastructure and the destruction that we’ve seen Israel unleash over the Gaza Strip repeatedly in the past. The Gaza Strip is already according to the UN close to being uninhabitable. Another military assault by Israel would be devastating. And in return, Israel certainly doesn’t want an escalation because Netanyahu is quite…in a quite sensitive position in his own coalition discussions. However, having said that, even though no party wants an escalation, the dynamic is such that neither party is willing to pay the political will to get out of this dynamic and here I shouldn’t actually equate both parties. The political will here rests with Israel as the stronger party and the enforcer of the blockade. The only thing that can change fundamentally this dynamic is for the blockade to be lifted and for the Gaza Strip to be dealt with as a political reality, not as a humanitarian reality.”

Menendez: “But don’t the rocket attacks just play into Israel’s hands in the sense it proves to the Israeli government that the blockade has to continue because it needs to put the squeeze on people who are firing rockets at their civilian centres?”

Baconi: “This is obviously not to justify the use of rockets: rockets in the form that Hamas is using them is a war crime because they are indiscriminate and they fall on civilians and combatants in an indiscriminate manner. But nonetheless, one needs to understand the drivers of these forms of activities and seeing the rocket fire as a response to the blockade is fundamental here. The blockade is itself an act of violence that is indiscriminately treating two million Palestinians – the vast majority of whom are youth and refugees – under collective punishment. So the idea that Israel has imposed the blockade because of the rockets is false, actually. The blockade has been imposed on the Gaza Strip in many ways since before Hamas was even created. The fundamental issue in Gaza is the fact that it’s [a] Palestinian political issue that Israel doesn’t need to or doesn’t want to address.” 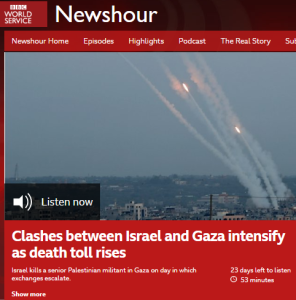 Menendez made no effort whatsoever to challenge Baconi’s inversion of the facts and whitewashing of terrorism. Listeners were not told that the Gaza Strip was designated ‘hostile territory’ by Israel over two years after Israel’s disengagement from the territory and following over 2,000 rocket attacks by Gaza Strip based terrorists in which 14 Israelis were killed.

The item was closed by Menendez at that point but listeners to the evening edition of ‘Newshour’ on the same day heard a slightly different version of the same interview with Baconi which was presented by Menendez (from 00:11 here) as “the context for this sudden escalation of fighting”.

In other words, BBC World Service radio’s idea of “context” that would aid audiences to understand the story was falsehoods concerning the counter-terrorism blockade from a known Hamas apologist representing an inadequately introduced political NGO.

BBC News recycles past inaccuracies and invents new ones