A theme prominently seen in BBC reporting of the ongoing wave of terrorism in Israel advances the idea that the roots of the surge in violence are to be found in ‘the occupation’ and Palestinian frustration over the lack of progress in bringing about the creation of a Palestinian state.

Of course that theme is by no means new; it has been a feature of BBC reporting since long before the current surge in terror attacks began. But the BBC’s habitual one-dimensional portrayal of the ‘peace process’ as something dependent on one party to the conflict alone means that its audiences remain severely under-informed with regard to the role played by Palestinian leaders and internal Palestinian politics (another subject consistently under-reported by the BBC) in the failure to reach a negotiated end to the conflict.

In a 2014 article titled “Palestine Needs Better Friends“, the WSJ’s David Feith examined the dynamics behind representations of the conflict of the kind seen in BBC content.

“The Palestinian cause has attracted international sympathy for decades, so why do Palestinians still suffer so grievously? The burdens of Israeli occupation aren’t the full story. Palestinians also suffer from bad leaders and bad friends who do them more harm than good. In newsrooms, universities and governments world-wide, supporters of Palestine are more like enablers choosing to ignore the terrorism and tyranny that have wrecked Palestinian politics. […]

Such Western enablers emphasize many of the genuine tragedies of Palestinian life, but they elide whatever facts contradict their pro-Palestinian articles of faith. They insist that Israel won’t compromise and a powerful Israel lobby steers U.S. policy, overlooking that Palestinian leaders rejected Israeli offers of statehood in 2000 and 2008. Their idea of progressivism means admiring the Palestinian “resistance”—and remaining silent about the illiberal horrors facing Palestinian women, religious minorities, gays and political dissidents.

This approach isn’t simply a whitewash. Rather it portrays Palestinian leaders in purposefully limited fashion, as victims and pawns forever being acted upon by Israel and other outsiders, and not as decision makers choosing how to act toward Israel and their own people. This denies Palestinians’ agency, treating them as if they have no responsibility for tyrannizing other Palestinians or terrorizing Israelis. […] 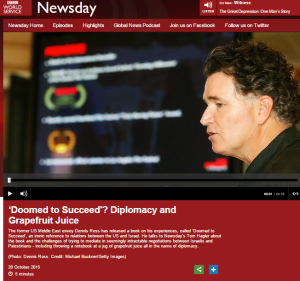 The October 26th edition of the BBC World Service radio programme ‘Newsday’ included an interview with former US Middle East envoy Dennis Ross.  Readers can listen to that item here from 18:02 and a version of it was also promoted separately on Twitter, using an image which does not match its caption’s claim that it is a photograph of Dennis Ross.

The introduction to the interview concluded as follows:

“Newsday’s Tom Hagler asked him if he had any optimism for a success story at the moment, with the background of the stabbings going on now”.

However, if listeners were expecting to hear analysis and information which would enhance their understanding of an issue which the BBC has repeatedly cited over the past few weeks as a factor driving the current wave of terror in Israel, they would have come away disappointed.

Although Ross provided some interesting anecdotes and insight into his negotiations with Yasser Arafat, unfortunately the brief item did little to counter the chronic deficit of information suffered by BBC audiences on the topic of why negotiations have repeatedly failed or to provide them with a view of Ross’ broader approach to the issue.

That wasted opportunity gives all the more reason to expect BBC promotion of the selectively framed theme of ‘Palestinian frustration’ as a cause for terrorism to continue.

Here is what the BBC’s ‘Style Guide’ has to say about the use of the word Palestine in BBC content:

In November 2012 the PLO secured a vote at the UN General Assembly, upgrading its previous status as an “entity” so that the UN now recognises the territories as “non-member observer state”.

But the UN vote has not created a state of Palestine (rather, it failed in its bid to join the UN as a full member state in 2011 because of a lack of support in the Security Council).

So, in day-to-day coverage of the Middle East you should not affix the name ‘Palestine’ to Gaza or the West Bank – rather, it is still an aspiration or an historical entity.

But clearly BBC journalists should reflect the changed circumstances when reporting on the UN itself and at the Olympics, where the International Olympics Committee recognises Palestine as a competing nation.

Best practice is to use the term Palestine firmly and only in the context of the organisation in which it is applicable, just as the BBC did at the Olympics – for example: “At the UN, representatives of Palestine, which has non-member observer status…” ” [emphasis added]

On January 1st, however, listeners to the BBC World Service radio programme ‘Newsday’ heard the title ‘Palestine’ used several times and were informed that as a result of the 2012 UN GA vote “it is now a state”. 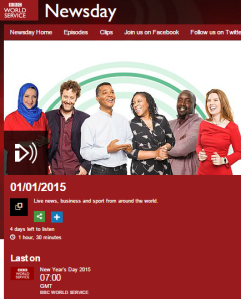 At the beginning of the programme – presented by Tom Hagler and Andrew Peach – audiences were inaccurately informed that “the Palestinians” had joined the ICC. In fact, whilst an application has apparently been submitted in the form of the signing of the Rome Statute, it has yet to be accepted and the process will take several weeks.

“Also, as the Palestinians join the international Criminal Court, we’ll look at whether Israeli soldiers could now face trial at the Hague.”

The item itself (available from 20:40 here for a limited period of time) begins with the following curious assumption from Hagler: [all emphasis in bold added, emphasis in original in italics.]

“Now it’s been a difficult year for the International Criminal Court with a number of African leaders unhappy with the process and threatening to pull out. So no doubt the ICC will have welcomed news of a potential new member: the Palestinians who have formally applied to join. But there’s more to that demand than just symbolism. Membership could open the way for investigations into alleged Israeli war crimes in Gaza and the West Bank.”

“So it’s worth noting Israel and the US are strongly opposed to this. The Americans say it’s counter-productive and could hamper the peace process. As for the Israeli Prime Minister Benjamin Netanyahu, he says he’ll take what he calls retaliatory steps. Will Palestine actually be able to join the ICC though just because it’s applied to? Professor John Strawson is co-director of the Centre on Human Rights in Conflicts at the University of East London and specialist in international law and I spoke to him earlier.”

Listeners are not informed that the expert they are about to hear explaining the topic has links to Birzeit University and a record of statements relating to the Palestinian –Israeli conflict which are obviously shaped by politics more than fact – for example:

“In this respect, the way in which the Palestinians have been treated since the Oslo process was even worse than before. What the Oslo process did by dividing the West Bank into segments was that it created a new way of running the occupation in which for the first time pass laws were introduced to control movement from one part to another. This begins to look like South Africa, and in my view there is a great deal in common with the apartheid regime and its pass laws. There is no question that there is a high degree of racial discrimination in Israel, and that the occupation of Gaza, the West Bank and east Jerusalem was based on very colonial notions of “the other”.”

The item continues, with Strawson informing listeners that – contrary to the BBC Style Guide’s stance – the 2012 UN GA vote created a State of Palestine.

JS: “Yes I’m sure it will. It is now a state. In 2009 when it actually first applied to join that was a question of doubt but that was cleared up by the General Assembly in 2012.”

AP: “And what is it they want to do by making this application? It’s all about recognition of Palestine as a state I suppose but there’s more to it than that.”

JS: “Well obviously what the Palestinians are hoping is that this will give them a different kind of traction in terms of the diplomatic offensive which they’ve been launching about the recognition of Palestine as a state and this time to take some initiative and perhaps preparing some – hopefully, they would imagine – some prosecutions of Israeli individuals for war crimes or possibly crimes against humanity in relationship to the occupation, maybe in relationship to the Gaza war for instance which took place last year.”

AP: “And how does the process work within the ICC of a state saying well, we’d like to have these prosecutions brought? Who decides what happens?”

AP: “And this I guess is why we’re seeing such strong representations from countries like Israel and the US against this idea.”

JS: “Well that’s true. On the other hand I think even Benjamin Netanyahu the prime minister of Israel has said – quite perceptive as a matter of fact – that the danger of Palestine referring issues to the ICC is not, say, Israel but also it could end up implicating Palestinian officials including Hamas for instance if you were to take the last conflict between Israel and Palestine. So that would be very…a very problematic issue. So I think he’s quite right about that: that it’s not just a question of prosecuting Israel. It’s a question of possibly raising all sorts of other issues which might be very damaging for the Palestinians.”

As we see, throughout the whole interview Andrew Peach makes no effort to correct the misleading impressions given to audiences by the interviewee and even adds to them himself. Clearly this item does not adhere to the guidelines laid out in the Style Guide intended to ensure that BBC journalists report accurately and impartially on topics relating to “Israel and the Palestinians”.