“The British taxpayer has handed over more than £6 million to charities that are currently, or have been in the past, used by extremists to further their radical agenda, according to a new report from the Henry Jackson Society. […]

Wolves in Sheep’s Clothing: How Islamist Extremists Exploit the UK Charitable Sector finds that, despite more than a decade of attempts to improve regulations, a concerning number of UK-registered charities continue to fund and support extremism.

Figures from across the Islamist spectrum, including the Muslim Brotherhood, form a network which seeks to delegitimise and push out moderate voices, while masquerading as representatives of ‘true’ Islam. […]

The Charity Commission – legally unable to de-register these ‘bad’ charities – has been particularly ill-equipped to deal with these organisations. Its powers have been extended in recent legislation, but the public is still waiting for those new powers to be put to use to tackle this problem.”

The report itself states:

“Charities have long been used to support the Islamist extremist cause, with a network of charitable organisations playing a pivotal role in the funding of international jihadism. […]

Beyond the exploitation of charitable status by violent Islamist extremists to support terrorist activities, they may also be used, wittingly or unwittingly, to provide violent or non-violent extremists with the platform and legitimacy they require to spread their illiberal and extremist views. This may take the form of an individual or small group of extremist entryists seeking to abuse a pre-existing charity for their own purposes, or the establishment of an organisation with charitable status specifically for Islamist extremist objectives. These charities, which for example provide platforms for extremist individuals and promote their literature, can be used to create a climate conducive to radicalisation and introduce potentially vulnerable members of the public to individuals who hold intolerant and extremist views. […]

The 2015 Counter-Extremism strategy recognises that charities were one of the institutions vulnerable to exploitation by extremists, who may use them to spread their ideology and charities have in the past, for example, promoted hate literature inciting the murder of homosexuals and Muslims and have hosted speakers who promote homophobic, sexist or anti-Semitic views.”

Members of the British public would probably not expect any of the organisations and individuals named in such a report to have been showcased by their publicly funded broadcaster. They would, however, be mistaken.

Page 37 of the report states:

“There are a number of well-reported incidents involving charities providing humanitarian aid and running aid convoys being involved in non-violent and violent extremism; above all, they highlight the blurred line between the two. On 16 October 2017 the Charity Commission published recent cases of individuals convicted of terrorism offences who were involved with charities. On 23 December 2016 two individuals, Syed Hoque and Mashoud Miah were convicted of entering into funding arrangements that they knew to be for the purposes of terrorism (contrary to Sec 17 Terrorism Act 2000). […]

During their trial the Charity Commission stated that they were investigating a number of charities organising aid convoys, including Al Fatiha Global, with which one of the pair was also involved. […]

Al Fatiha Global is a UK-registered charity that had a total income of £218,778 in the financial year ending 2016. It was investigated by the Charity Commission in 2014 after the son of its Chief Executive was photographed in Syria with two men holding assault rifles. The Charity Commission had “serious concerns about [the charity’s] governance and financial management” and set out to investigate allegations of “inappropriate links between the charity and individuals purportedly involved in supporting armed or other inappropriate activities in Syria”.

On August 13th 2014, the BBC aired a filmed report from the Gaza Strip by Orla Guerin which was based in part on a British woman’s unchallenged allegation that an IDF sniper had shot a Palestinian for “no reason whatsoever”. As was pointed out here at the time:

“Viewers are also not told that Ms Andolini’s activities in the Gaza Strip include distributing aid funded by a British charity called Al-Fatiha Global […] which is currently under investigation by the Charity Commission due to “serious concerns about the governance and financial management of the charity”.”

“Alan Henning, an aid worker who was kidnapped and executed by Islamic State, travelled with an aid convoy reportedly organised by either Al-Fatiha Global or Rochdale Aid 4 Syria, which raises money for Al-Fatiha and others. […]

Additionally, Aid4Syria, whose parent charity was al-Fatiha, and for which Alan Henning had been an ambulance driver, showed signs of extremism. The charity had promoted an event entitled “O’Ummah Wake Up and Rise!” on its Facebook page, involving speakers Zahir Mahmood and Moazzam Begg. The convoy’s team leader had posted on his Facebook page “Our men love death like your men love life”, alluding to a similar quote by Osama bin Laden. Aid4Syria had also named its water project and emergency vehicles after Aafia Siddiqui, who was convicted in the US for attempting to kill US military personnel.” 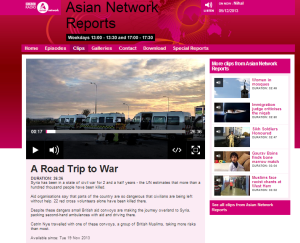 Readers may recall that in late 2013 reports by BBC journalist Catrin Nye – who travelled with one of those convoys – were heavily promoted on a range of BBC platforms. Nye produced additional reports on the same subject in July 2014 which once again failed to adequately inform audiences of the convoys organisers’ links to extremism.

The HJS report goes on:

“One of the charity workers on the convoy, Majid Freeman, had posted extremist comments online, including calling for prayers for the brothers of Islamic State fighter Ifthekar Jaman. […] Freeman also had approvingly posted a link on Facebook to a video presenting Islamic State as a legitimate reaction to Western foreign policy. […] Freeman had retweeted support for Al Qaeda affiliate Jabhat al Nusra, as well as the group’s propaganda, and on Facebook wrote that Jerusalem would be “conquered by jihad, not by peace”.”

Freeman – described as “a credit adviser from Leicester” – was featured in one of Catrin Nye’s articles and following the kidnapping of Alan Henning he appeared in numerous other BBC reports – e.g. here, here and here.

Another charity appearing in this report is Islamic Relief (from p.64). In 2014 the BBC published an article in which that organisation’s links to Hamas were denied and later the same year the BBC produced a very superficial report on an audit of the charity.

The organisation ‘Viva Palestina’ – which had its charitable status removed in 2013 following an inquiry by the Charity Commission – is discussed on page 72 of the HJS report. Its founder – George Galloway – has appeared frequently on BBC platforms.

Among the individuals named in the report is Cerie Bullivant of ‘Cage‘ who not only has his own BBC profile but has appeared on numerous BBC programmes – including one on ‘how best to tackle radicalisation’. Moazzam Begg – also of ‘Cage’ – has likewise been a BBC contributor. The report also names Haitham al Haddad (from p. 96) who was featured in a series of reports by Catrin Nye as well as in additional BBC content.

As regular readers are aware, the BBC’s editorial guidelines on impartiality state:

“We should not automatically assume that contributors from other organisations (such as academics, journalists, researchers and representatives of charities) are unbiased and we may need to make it clear to the audience when contributors are associated with a particular viewpoint, if it is not apparent from their contribution or from the context in which their contribution is made.”

However the BBC usually makes little effort to adhere to that clause when quoting and promoting NGOs, charities and their representatives.

The same editorial guidelines state that due impartiality does not require “detachment from fundamental democratic principles” of the type typically rejected by extremists and the BBC’s public purposes oblige it to “contribute to social cohesion” in the UK.

Obviously that obligation is not met – and the wider interests of the public not served – through the provision of platforms and legitimacy to extremists – particularly when charities are regularly promoted without the required disclosure of their ideologies, political agendas and any extremist links.

Not just about journalism: BBC editorial guidelines and the wider public interest

The investigation by the Washington Post and Buzzfeed which revealed the identity of a British member of an ISIS execution cell which murdered journalists, aid workers and others has naturally raised keen interest in most of the UK media. Among the many outlets which have reported the story are the Telegraph, the Independent, the Mirror, the Daily Mail and the Sun.

The reports include information about Alexanda Kotey’s participation in the 2009 ‘aid convoy’ to the Gaza Strip organised by former MP George Galloway’s ‘Viva Palestina’ group. The Washington Post writes:

“Kotey left Britain in 2009, when he traveled to the Gaza Strip on an aid convoy of 110 vehicles organized by George Galloway, then a member of British Parliament. Nine volunteers on the Viva Palestina mission were arrested under the United Kingdom’s Terrorism Act the day before departure. Galloway, a controversial figure in Britain for his radical views, described the arrests as an effort to “smear and intimidate the Muslim community.””

“Mr Galloway told ITV news he does not remember meeting Kotey. His spokesman Ron McKay said: ‘There were 500 people on that convoy and George can’t ever remember laying eyes on this guy. It’s possible he was there but George doesn’t remember meeting him.’

He said there was a vetting procedure for those who applied to be on the convoy but he had never heard Kotey’s name before.”

This is not the first time that the ‘Viva Palestina’ “vetting procedure” has been shown to be unreliable and, courtesy of Harry’s Place, it can be seen that Kotey’s name appeared on its list of participants in that particular convoy.

At the time of writing the BBC News website does not carry any coverage of this story on its international, national or local pages. However, seeing as George Galloway is a regular guest on BBC programmes, we can surely anticipate that it will not be long until a BBC journalist quizzes him on the topic of the criteria he laid down for his organisation’s “vetting procedure”, what exactly it was intended to check and the question of whether the organisation he headed exercised due diligence. After all, it would surely be in the public interest to hear the answers to such pertinent questions from a man who now aspires to run Britain’s largest city.