The International Solidarity Movement (ISM) is – as readers are most likely aware – an organisation which since the early days of the second Intifada has been providing financial, logistic and PR support to terrorist organisations which attack Israeli civilians.

One of the ISM’s activists currently located in the Gaza Strip is American Joe Catron who has been very busy in the past three weeks giving interviews to the Iranian regime-run Press TV, putting out propaganda material and acting as a voluntary human shield. Catron’s “standpoint” can be discerned very easily from his use of social media.

As readers also know, the BBC’s editorial guidelines oblige it to inform audiences of an interviewee’s “standpoint” so that his or her contribution can be understood in its correct context. However, when the BBC World Service’s Dam Damon interviewed Joe Catron for the July 31st edition of ‘World Update’ (available here for a limited period of time from around 43:21, or here as a separately promoted podcast), he failed to inform listeners that Catron is a member of the Hamas-supporting ISM and made no attempt whatsoever to “summarise” his “standpoint” with the result being that listeners were subjected to over three and a half minutes of undiluted Hamas propaganda, supposedly from a ‘neutral’ source. 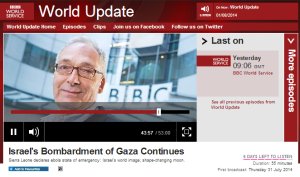 Catron was introduced by Damon thus:

“Nine foreigners are in Gaza’s main hospital al Shifa. They are volunteering as human shields. They take turns sitting in the wards on 12 hour shifts. They think that their presence will help deter military attacks by Israeli forces. Other hospitals have human shields – so called human shields – as well. I’ve been speaking to one of these at al Shifa. He’s Joe Catron – 33 years old. The line wasn’t great. I think you’ll be able to hear though everything that is in Joe’s mind. Here’s what he told me.”

Catron: “In terms of aerial assaults they’ve gotten very close. Ahm…the other night I was here for the overnight shift from 7 p.m. to 7 a.m. and there were repeated airstrikes all around the building. I stepped outside. I could see flares as well as smoke coming from a short distance away. In terms of the ground invasion they haven’t pushed that close.”

Damon: “And has the hospital been hit at all?”

Catron: “The hospital has been hit peripherally. Ah…one wall was damaged by a shell the other day. I think there were a couple of injuries from that but it has not been targeted per se.”

Damon: “Because you will know that there have been all kinds of rumours on the internet about hospitals being used to hide men and indeed weapons. Any evidence?”

Catron: “Oh yes; I’ve heard all these…all kinds of these rumours. I’ve seen numerous claims that al Wafa hospital where I stayed for a week in Shuja’iya was the centre of a Hamas and Islamic Jihad militant command centre. Now every journalist that came into the hospital from every major news agency had full run of the place. They could go anywhere in it they liked. How none of them ever noticed this command centre…. Shifa as well is thick with reporters at the moment and I’ve seen no reports of anything like that from any of them.”

Damon: “Are you making a difference being there as a human shield?”

Catron: “You know, that’s difficult to say. Obviously the operational logic is that Israel is much more reluctant to target foreigners than it is Palestinians. Now it’s difficult to say. Ahm… I had a number of expectations at the beginning of this escalation about how far the Israelis were willing to go and what they were willing to do. They’ve already proven a number of those expectations wrong. So how safe we are here and how much of a deterrent we offer, I can’t offer a firm answer to that. All we can do is sit and hope.”

Damon: “Do you have any understanding of Israel’s position that the rockets are flying from Gaza, err…those rockets are intended to kill civilians, they’re entitled to respond?”

Catron: “Well I think it’s very clear looking at the outcomes who intends to kill civilians. Israel has now killed over a thousand of them while Hamas has targeted its attacks on Israeli soldiers and it’s been doing fairly well on that front considering the circumstances.”

Damon: “I guess you don’t mean to deny that the rockets fired by Hamas are targeting civilian areas inside Israel?”

Catron: “Well, Israel places many of its military assets in civilian neighbourhoods. The headquarters of the Israeli military is located in a large civilian block of buildings in Tel Aviv. Ahm…but Hamas has always made it clear that its rockets are aimed at these military assets. [unintelligible] also knowledge is that they’re unfortunately imprecise.”

Damon: “What about the people back home, Joe? Don’t they think that you’re being foolhardy?”

Catron: “I’m sure some of them do and they may have a point. [Damon laughs] Ahm…they’re a mix of course. America has a broad range of opinions.”

Damon: “What about your family?”

Catron: “Ahm…they’re a political mix when it comes to the situation. You would hear various perspectives from them.”

Damon closes the item by saying:

“That’s Joe Catron; described as a human shield at the al Shifa hospital in Gaza.”

So what did World Service radio audiences learn here and did anything in this interview contribute to fulfilling the BBC’s obligation according to its constitutional document to “build a global understanding of international issues”?

Well, they discovered that the BBC considers filmed and photographed evidence of the discovery of weapons, missiles, explosives and tunnel entrances in at least one hospital in the Gaza Strip to be “rumours on the internet”.

They got to hear the BBC provide a platform for Joe Catron’s obviously dishonest claim that Wafa hospital was not used by Hamas for military purposes and his promotion of the notion that the hospital in which he is currently located – Shifa – is not used by Hamas either. That of course is especially ridiculous in light of the fact that the BBC has interviewed at least one member of Hamas at that location.

Audiences also discovered – for the second time in two days – that not only has the BBC no intention of informing them about what really went on at Wafa hospital in Shuja’iya, but that it will actively hinder that information from coming to light, along with any other documentation of the use of civilians in Gaza as human shields.

They were also misled by Catron’s assertion that the foreign media in Gaza is able to report freely and that there cannot be any Hamas abuses of hospitals because the foreign media has not reported them. Increasingly, evidence coming out of the Gaza Strip shows that claim to be patently untrue.

Listeners were exposed to Catron’s unchallenged and inaccurate assertion that over one thousand civilians have been killed in the Gaza Strip.

They were misled with regard to the civilian targets of Hamas missiles as Catron spouted propaganda straight from the Hamas handbook claiming that it targets military installations.

Clearly, the broadcasting of this interview with a Hamas supporter fails to contribute anything to the fulfilment of the BBC’s public purposes and the fact that his “standpoint” and affiliations were not declared to listeners breaches editorial guidelines.

No less worrying for the BBC should be the fact that it has rendered itself utterly indistinguishable from the Iranian regime’s media mouthpiece which Joe Catron usually frequents.

7 comments on “BBC WS presenter: filmed evidence of Hamas’ misuse of hospitals is ‘rumours on the internet’”