Here, for the record, is an interesting Twitter exchange: 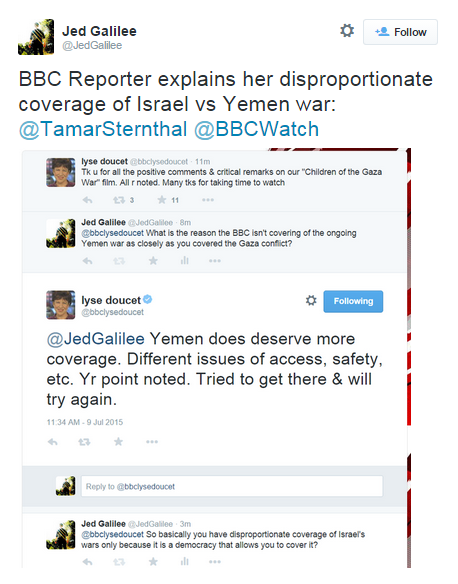 BBC audiences would no doubt be very interested to hear more details about the easier access and safer reporting conditions in the Gaza Strip.

But of course it is not just the volume of reporting which distinguishes the BBC’s coverage of last summer’s conflict in Israel and the Gaza Strip from its reporting on the ongoing conflict in Yemen: the difference in tone of reporting is remarkable too.

With the casualty toll in Yemen having surpassed that in the Gaza Strip last year, it is worth taking a look at how that news was presented in the latest report to appear on the BBC News website’s Middle East page. 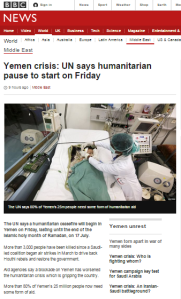 “More than 3,000 people have been killed since a Saudi-led coalition began air strikes in March to drive back Houthi rebels and restore the government.

Aid agencies say a blockade on Yemen has worsened the humanitarian crisis which is gripping the country.

Another one million civilians have been displaced by the conflict.”

Markedly absent from that factual, non-emotive account are BBC journalists’ amateur opinions on ‘international law’ and the accusations of war crimes, crimes against humanity, collective punishment and deliberate targeting of civilians which characterized the BBC’s reporting from the Gaza Strip last summer.

Moreover, the BBC has no difficulties in presenting audiences with a summary of the cause of the conflict in Yemen and does not censor integral factors leading to its outbreak or use the formula “Saudi Arabia says”.

“In recent months Yemen has descended into conflicts between several different groups, although the main fight is between forces loyal to beleaguered President Abdrabbuh Mansour Hadi and Shia Zaidi rebels – or Houthis – who forced Mr Hadi to flee the capital Sanaa in February.

After rebel forces closed in on the president’s southern stronghold of Aden in late March, a coalition led by Saudi Arabia responded to a request by Mr Hadi to intervene and launched air strikes on Houthi targets.”

That, of course, is the difference between news and narrative.

Comparing BBC coverage of civilian casualties in Yemen and Gaza