A few days ago we posted here a video of a speech made by Tel Aviv University valedictorian Haisam Hassanein who was born in Egypt.

Nine days later, BBC Trending produced a video relating to the same topic which was promoted on social media and in the ‘Features’ section of the BBC News website’s Middle East page.

The video – made by BBC Arabic’s Mai Norman – includes frames of excerpts from Haisam Hassanein’s speech interspersed with comment from the video maker, edited written responses to the original film and comment from two interviewees. 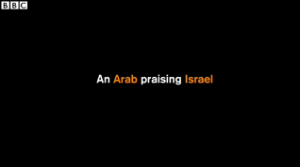 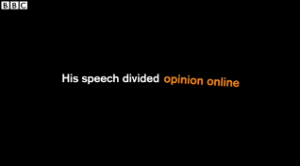 “I find no fit between what he said and what I see in my everyday life.”

Viewers are told that the film of Hassanien’s speech went viral “but many Egyptians were angry”. “Many” is of course a very unclear term: there are currently 385 responses to the film – not all of them from Egyptians by any means – and some of those that are from Egyptians are very positive.  Viewers are then shown edited versions of a few of the comments left on that Youtube page. 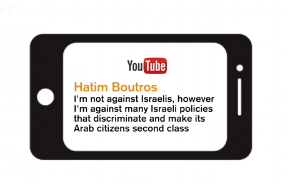 The full version of Hatim Boturos’ comment is as follows:

Viewers then see the following frames. The word ‘Jewish’ does not appear in Hassanein’s speech at that point and was inserted by the video maker. 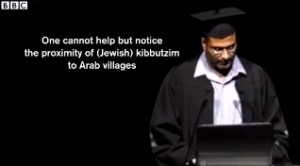 The film then cuts to commentary from the same woman shown before – this time identified.

“What he said has nothing to do at all with what we experience every day as Palestinians in Israel. I wish at some point in the near future that the picture will be very similar to what he draw but up till now things are very different.”

Rula Nasr-Mazzawi is from Nazareth. She is actually an industrial organisational psychologist (not a psychiatrist as claimed by the BBC) who studied at the University of Haifa for her BA and MA, as well as at San Jose State University. Prior to her current position, she worked for Kav Mashve: a non-profit organization established to promote the employment of Arab-Israeli academics. Kav Mashve was set up by the Manufacturers Association of Israel and others and its activities are supported by the Prime Minister’s Office.

Of course that side of the picture gets no mention in Ms Nasr-Mazzawi’s mini-monologue or in Mai Norman’s film in general.

The ostensible reason for BBC Trending’s pick-up of this story is that the video of Haisam Hassanein’s speech got a lot of views on You Tube. Although BBC Trending claims that its mission is “[r]eporting on what’s being shared and asking why it matters“, rather than exploring – for instance – why so many people found the film interesting or what causes citizens of Egypt to hold such obviously mistaken beliefs and stereotypes about Israel, BBC Trending seemed to be more interested in discrediting Hassanein’s impressions and presenting  counter views to what it described in the synopsis to this filmed report as his “surprising take on Israel”.

Why was that mission creep deemed editorially acceptable?