On the morning of January 31st a terror attack took place at a checkpoint north of Ramallah.

“Three Israeli soldiers were wounded on Sunday when a member of the Palestinian Authority security forces opened fire at an IDF checkpoint near Beit El in the West Bank. He was shot dead by forces at the scene.

Magen David Adom emergency services said that two victims were in serious condition with wounds to the neck and thigh, respectively, and one was lightly hurt.

The shooter drove up to the Focus checkpoint in a car, was asked for his ID, got out and opened fire with a handgun, injuring the three soldiers. Palestinian reports named him as Amjad Sakari, 35, and said he was a member of the Palestinian Authority security forces who was working as a bodyguard for the Ramallah district attorney.”

There was no BBC coverage of that attack at the time and so audiences were not informed of the Palestinian Authority police force’s glorification of the terrorist. 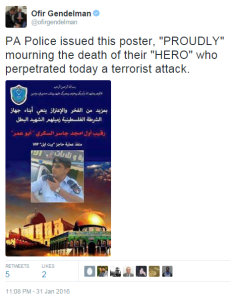 Neither did they learn of similar praise from the PA’s dominant faction Fatah. 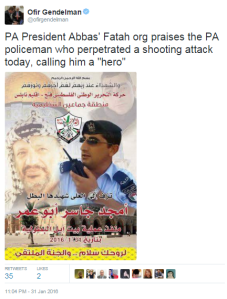 The fact that the terrorist was later buried with honours at a PA organized funeral was also not reported to BBC audiences.

“The Palestinian Authority on Monday held a military funeral for Amjad Sukkari, the Palestinian policeman who carried out the shooting attack near Bet El a day earlier. Three IDF soldiers were wounded in the attack. […]

The only very brief mention of that terror attack came over 24 hours later in an article titled “Israel restricts entry to Ramallah after shooting attack” which appeared on the BBC News website’s Middle East page on February 1st.

“The restrictions were imposed after a Palestinian policeman shot and injured three Israeli soldiers at a checkpoint outside the city before being killed.”

Whilst the short closure was in fact lifted several hours after the BBC’s report appeared, that information was not added to the article, which still remained on the website hours after it was no longer relevant.

The BBC’s report refrained from informing readers of the reason for the closure.

“For the first time in more than a decade, the IDF on Monday placed a partial daylong blockade around the large West Bank city of Ramallah. […]

Instead, the BBC elected to misrepresent a counter-terrorism measure to its audiences by means of amplification of Palestinian propaganda. 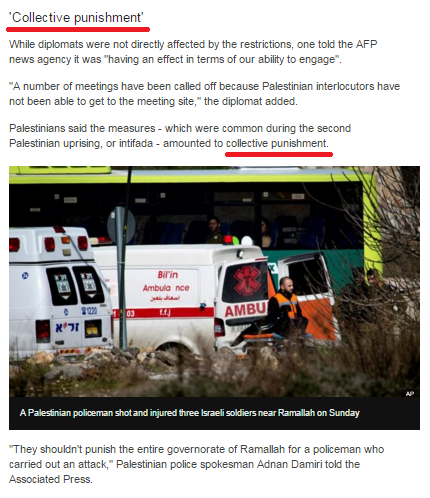 Had BBC audiences been made aware of the facts behind the partial one-day closure of Ramallah and had they been told that the quoted spokesman’s organization publicly glorified his colleague’s act of terror, they may have been able to put his irrelevant claim into more appropriate context.

But at the same time as it eagerly provides uncritical amplification for such propaganda, the BBC continues to embrace an editorial policy according to which PA incitement and glorification of terrorism are taboo subjects, thus undermining the corporation’s public purpose remit of enhancing audiences’ understanding of international issues.