BBC WS radio history programme ‘Witness’ describes itself as providing audiences with “the story of our times told by the people who were there”. Its June 9th edition – presented by Louise Hidalgo – was devoted to promoting the notion that the Iraqi nuclear weapons programme began after – and because of – the Israeli airstrike on the Osirak reactor in 1981.

The synopsis to the promoted podcast reads:

The synopsis to the online version of the programme reads: 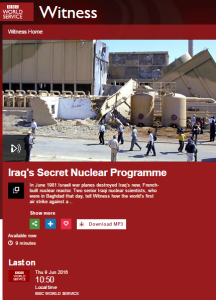 “Today we’re going back to June 1981 when the Israelis attacked and destroyed an Iraqi nuclear reactor – Osirak – in the first preemptive airstrike on a nuclear facility that the world had ever seen. A few years ago ‘Witness’ talked to the Israeli pilot who led that raid. Today we talk to two Iraqis who were on the ground; both nuclear scientists who would be closely involved in the secret mission to acquire nuclear weapons that followed – and they say was triggered – by the Israelis’ action.”

‘Operation Opera’, which took place on June 7th 1981, was not “the first preemptive airstrike on a nuclear facility that the world had ever seen”: on September 30th the previous year, Iranian planes had bombed the same nuclear facility near Baghdad causing light damage.

Iraq’s nuclear programme had of course begun many years before Operation Opera and in September 1975 the then vice-president Saddam Hussein declared in a newspaper interview “that procurement of a French-built reactor represented ‘the first Arab attempt at nuclear arming'”.

“Was the reactor about to become operational? Was it a threat to Israel? Dhafir Selbi insists it was not. Instead he says what happened that June made Iraq’s leader Saddam Hussein determined that if Iraq couldn’t develop nuclear facilities openly without fear of attack, it would do so secretly.”

Listeners also heard Selbi make the preposterous claim that were it not for Operation Opera, the 1991 Gulf War might have been avoided. Hidalgo made no effort to remind audiences that the war was the result of the Iraqi invasion of Kuwait in 1990 and totally unrelated to Israel.

“If the Israelis had not bombard us we wouldn’t have gone to a covert activity and everybody would have been happy. The IAEA inspectors are [were] there continuously; this is a prerequisite for the nuclear reactor […] and Iraq would maybe, maybe wouldn’t have gone through the 1991 war.”

“This line of activity – enriching uranium – we did not even think about it before the bombardment.”

The second of Hidalgo’s two interviewees was self-described Fatah conscript Imad Khadduri (see page 38/39 here) to whom the BBC previously provided a platform for the promotion of similar claims in an interview ten years ago. Khadduri and Selbi are among the co-authors of a book they self-published in 2011 and among the protagonists of the historically problematic notion that the Iraqi nuclear weapons programme only came into being after – and as a result of – Operation Opera.

The unchallenged promotion of such distorted historical accounts cannot possibly be said to contribute to meeting the BBC’s remit of building “a global understanding of international issues”.