BBC reporting on last week’s UNESCO resolution concerning the old city of Hebron – including the Tomb of the Patriarchs – has consistently failed to adequately clarify to audiences both the real reasons for Israel’s objections to the motion as well as the fact that the professional body assessing the proposal submitted by the Palestinian delegation did not recommend its adoption and criticised it for ignoring Jewish and Christian heritage in the city, “even though extensive remains testify to these links”.

An additional report concerning that story was broadcast (from 30:07 here) on the BBC World Service radio programme ‘Newshour‘ on July 7th. In his introduction to that item, presenter James Coomarasamy once again failed to clarify to listeners in the BBC’s own words that Israel’s objections are actually rooted in UNESCO’s declaration of the old city of Hebron a ‘Palestinian’ site – and the consequent erasure of its Jewish history and heritage – rather than in any objection to conservation per se. 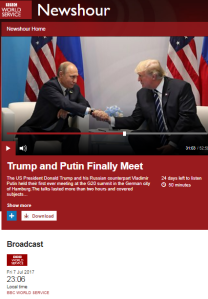 Coomarasamy: “Israel has denounced a decision by UNESCO to declare the old city of Hebron in the occupied West Bank a protected world heritage site. The resolution passed by a committee of the UN’s cultural agency also put it on a list of sites considered to be in danger. Israel’s prime minister Benjamin Netanyahu said it was a delusional decision.”

Listeners next heard a voice-over translation of the Israeli prime minister speaking in Hebrew.

“This time they have determined that the Tomb of the Patriarchs in Hebron is a Palestinian site – in other words, not Jewish – and that the site is endangered. Not a Jewish site? Who’s buried there? Abraham, Isaac, Jacob, Sarah, Rebecca and Leah: our forefathers and mothers. And that this is in danger? Only where Israel is present like in Hebron is freedom of worship ensured for everybody. Throughout the Middle East mosques, churches and synagogues are being blown up. Places where Israel is not present. So we will continue to guard the Cave of the Patriarchs to ensure religious freedom for everybody and we will continue also to guard the truth.”

Coomarasamy then told listeners that they were about to hear information concerning “the history” behind the story.

“So what is the history behind the Israeli prime minister’s clear annoyance at this decision? Our Middle East correspondent Tom Bateman is in Jerusalem.”

The history of the Tomb of the Patriarchs is of course well documented, with Abraham’s purchase of the site appearing in the Book of Genesis. While one can of course choose to believe that biblical story or not, what is not disputed is that the site was of such importance to Jews that Herod built a structure over the burial caves that is described by UNESCO’s professional team as having been “built in the 1st century BCE” – i.e. hundreds of years before the Islamic conquest of the region.

However, instead of providing audiences with a factual account of the site’s history, Tom Bateman preferred to give a narrative based portrayal of the story that cites ‘views’ – with views of course by definition being open to question and debate. [emphasis added]

Bateman: “Well he’s upset because Hebron, which is in the occupied West Bank, in his view and in the view of many Israelis has a connection to Judaism that goes back thousands of years. And the Cave of the Patriarchs that he talked about there, whilst the site itself is revered by all three of the monotheistic religions, to Judaism it is the burial-place of Abraham. Ah…and so it is his view that what’s happened here is that the Palestinian delegation has gone to UNESCO and has effectively used it for a politically motivated decision to try and enshrine Palestinian sovereignty over the entire city. Now for the Palestinians the view is rather different. It is that they believe that the site is endangered because of what they see as threats from occupation, from the Jewish settlements that are there in those…right in the centre of the old city and so they have for some time now been pushing for this vote and it went their way at UNESCO in Krakow at the meeting by 12 votes to 3.”

Bateman also refrained from providing audiences with any information concerning the history of the Jewish community in Hebron up to the 20th century or the more recent history – the Hebron Protocol – that would help listeners understand that there are “Jewish settlements …right in the centre of the old city” because the Palestinians agreed to that arrangement twenty years ago. He did however find it important to describe “pretty chaotic scenes” at the UNESCO vote before Coomarasamy made a vague reference to some more history: that of the Palestinian delegation’s repeated exploitation of the UN’s cultural forum for the denial of Jewish history and delegitimisation of Israel.

Coomarasamy: “And Israel’s going to reduce its funding to the UN; as you say there’ve been a number of decisions by the UN that Israel is unhappy about. This is just going to make, I guess, that relationship even worse.”

Bateman: “Yeah that’s right. I mean we’ve heard Prime Minister Benjamin Netanyahu say repeatedly that parts of the UN, and particularly UNESCO, are biased against Israel; they’re politically motivated, they’re in hock to Israel’s adversaries. And when he said – as we heard in the clip there – that this was delusional yet again by UNESCO after a vote that they felt severed Judaism’s historic ties to Jerusalem itself – to the Western Wall – ah…earlier this year, so he has said after this vote that he’s gonna withdraw another million dollars of funding to the United Nations and instead, he says, he will put that money into a heritage museum in Hebron.”

Like the rest of the BBC’s coverage of this story, Bateman’s equivocal ‘he said-she said’ account and his refusal to even provide historical facts without introducing false equivalence and ‘narratives’ obviously does not meet the corporation’s mission of providing “accurate and impartial news, current affairs and factual programming of the highest editorial standards so that all audiences can engage fully with issues across the UK and the world”.

11 comments on “BBC ME correspondent: Jewish history in Hebron is a ‘view’”