At the end of this month the mandate of the UN peacekeeping forces in Lebanon – UNIFIL – will expire and its renewal is scheduled for discussion at the UN Security Council.

That mandate of course includes clauses which have not been met throughout the last eleven years:

“Assist the LAF [Lebanese Armed Forces] in taking steps towards the establishment between the Blue Line and the Litani river of an free [sic] of any armed personnel, assets and weapons other than those of the Government of Lebanon and of UNIFIL deployed in this area;

Assist the Government of Lebanon in securing its borders and other entry points to prevent the entry in Lebanon without its consent of arms or related materiel.”

However, this time round the mandate’s renewal may perhaps not be as automatic as in previous years. On August 7th the US mission to the UN put out a press release:

“On Friday, August 4, UN Secretary-General António Guterres submitted a letter to the Security Council recommending that the Council renew the mandate of the United Nations Interim Force in Lebanon (UNIFIL), which is due to expire on August 31. In the letter, the Secretary-General called for the disarmament of all armed groups in Lebanon to strengthen the Lebanese Armed Forces (LAF) and the authority of Lebanon’s government. He also noted the illegal presence of armed personnel, weapons, and infrastructure inside UNIFIL’s area of operations, and his intention to look at ways in which UNIFIL could enhance its efforts against them.

“We share the Secretary-General’s strong desire to enhance UNIFIL’s efforts to prevent the spread of illegal arms in southern Lebanon,” said Ambassador Haley. “These arms – which are almost entirely in the hands of Hizballah terrorists – threaten the security and stability of the region. UNIFIL must increase its capacity and commitment to investigating and reporting these violations. The United States will continue to raise the threat posed by Hizballah as we seek significant improvements to UNIFIL when the Security Council renews its mandate this month.””

The UN Secretary General’s letter to the Security Council stated:

“The government of Lebanon must exercise effective authority over all Lebanese territory, prevent hostile actions from its territory, ensure the safety and security of the civilian population, in addition to United Nations personnel, and also ensure the disarmament of all armed groups”. 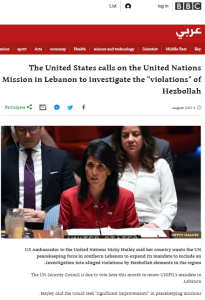 Whether or not those demands based on UNSC resolution 1701 will finally be met is obviously questionable given the make-up of the current Lebanese government.

Nevertheless, reports concerning Ambassador Haley’s intention to seek “significant improvements” to UNIFIL’s mandate were seen on many media sites – but the story did not receive any coverage on the BBC’s English language platforms.

In contrast, editors at the BBC Arabic website did consider that story newsworthy and an AFP report on the topic was translated into Arabic for publication on that site.

BBC News yawns over another violation of UNSC resolution 1701