The October 14th edition of the BBC World Service radio programme ‘Newshour‘ included an item (from 38:06 here) that was introduced by presenter Paul Henley as follows: 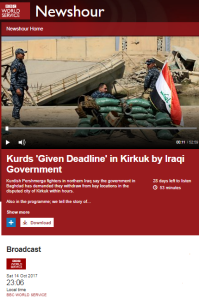 Henley: “Now a film called ‘Wajib’ by the Palestinian director Annemarie Jacir has been shown at the London film festival. The film is the only Arab entry in competition and follows a father and his estranged son who must come together to hand-deliver his daughter’s wedding invitations to each guest, as is the custom in…in Palestine.”

“…should not affix the name ‘Palestine’ to Gaza or the West Bank – rather, it is still an aspiration or an historical entity.”

Henley’s choice of words is even more egregious in light of the fact (not clarified to listeners) that the film’s story is based in Nazareth in northern Israel. Nevertheless, listeners heard another reference to ‘Palestine’ just seconds later.

Henley: “Now my colleague Razia Iqbal spoke to Annemarie for Newshour and she asked her how difficult it was as a Palestinian to keep politics and art separate.”

Jacir: “I don’t think it’s possible to make a film in Palestine that’s not somehow political because that’s just daily life. It’s everywhere. It’s in the way you travel, it’s in parents dropping their kids off to school, you know, you get round a checkpoint or not.”

Later on in the interview (40:53) listeners heard the following statements from Bethlehem born, Saudi raised, US educated Annemarie Jacir:

Jacir: “I think the Palestinians that are living in, you know, historic Palestine in a city like Nazareth – which is the biggest Palestinian city [sic] in Israel – they aren’t…who are they represented by? You know they are Israeli citizens on paper but they’re second, third class citizens. They don’t have the same rights. They’re not represented by the Israeli government for sure. They’re definitely not represented by the Palestinian Authority and so I feel like it is a community that lives a contradictory life and they’re struggling to find an identity…the identity and also, yeah, a political representative.”

Arab-Israelis living in Nazareth or anywhere else in Israel of course have the same rights as any other citizen – including the right to vote for their chosen parliamentary representatives. Eighteen (i.e. over 20% – reflecting the proportion of minorities in the population as a whole) of the current members of the Knesset are Arab-Israelis, Druze or Bedouin representing six different political parties (three of which – in contrast to Jacir’s claim – are part of the current coalition government) and surveys repeatedly indicate that the majority of Arab-Israelis view Israel in a positive light.

Despite that, Razia Iqbal failed to present any challenge whatsoever to Jacir’s politically motivated, inaccurate and materially misleading claims and swiftly moved on to the next topic.

And yet, the BBC continues to claim that it provides its funding public with “accurate and impartial news, current affairs and factual programming of the highest editorial standards”.