Back in March 2016 the BBC News website published a report titled “Israel rejects database of settlement-linked firms” that related to a resolution adopted by the UN Human Rights Council the previous day and which was discussed here. 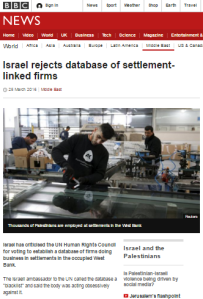 “The BBC’s Yolande Knell in Jerusalem says the database will provide a resource for any organisation wanting to divest from companies involved in Israel’s occupation of Palestinian lands.

It will potentially include a number of Israeli and international firms working in industries from banking to construction and security services, our correspondent adds.”

Recently an Israeli communications company received a letter from the UNHRC which has been making local news.

“The UNHRC recently sent a letter to the CEO of Bezeq, a major Israeli telecoms firm, accusing it of promoting settlement activity in Israel and of providing cellular services to areas that the Council believes are Palestinian territory. […]

The UNHRC threatens to add Bezeq to its database of companies operating in what it claims are Israeli settlements and the occupied Palestinian territories.

“Bezeq owns approximately 40 real estate properties in the West Bank used for telecommunications infrastructure, and operates antennas throughout the West Bank,” the UNHRC wrote in its letter.”

“Bezeq provides landline, cellular, internet, and cable TV services to residents of settlements in the West Bank,” according to the UNHRC, which considers this activity a violation of its accords.”

Apparently some 150 such letters have been sent by the UNHRC.

“The United Nations reportedly sent letters to some 150 Israeli and overseas companies, threatening to add them to its blacklist of firms operating in the West Bank, East Jerusalem and the Golan Heights. […]

An unnamed western diplomat told Haaretz that more than half of the companies that received the warning letter were Israeli, about 30 were from the US and the remainder from countries including Germany, Norway and South Korea. The diplomat added that [UN Human Rights Commissioner] Hussein also sent copies of the letter to foreign ministries of several countries who are home to companies which may be added to the blacklist.”

Despite the fact that numerous international companies do business in additional locations  categorised as occupied territories (e.g. north Cyprus, Western Sahara), the UN Human Rights Council has not passed resolutions mandating the creation of a database of businesses operating in any location other than those it views as being occupied Israel.

In recent days BBC audiences have seen and heard a number of reports concerning the UN (for example here, here and here) in which the phrase anti-Israel bias was placed in scare quotes and that bias was described in qualifying terms such as “perceived”.

The BBC, however, has ignored the story of the letters sent by the UNHRC that demonstrate clear anti-Israel bias at the United Nations.