Back in July 2015 the BBC ran a series of reports about the Boycott, Divestment and Sanctions campaign against Israel (BDS) that were promoted on television, radio and the corporation’s website.

More BBC mainstreaming of the anti-Israel BDS campaign – part one

While portraying that campaign as one that “says it’s defending human rights”, the BBC made no effort whatsoever to provide audiences with the full range of information concerning its funding, origins, claims and aims. Moreover, audiences were misled as to the origins of the BDS campaign by the main interviewee featured in the reports, Michael Deas (who was at the time campaign officer for the BNC and is currently a “Palestine solidarity organiser”), who claimed that:

“The international community consistently fails to hold Israel to account for its violations of international law. So given this failure, ten years ago – in July 2005 – Palestinian organisations came together to issue an appeal for a campaign of boycotts, divestment and sanctions similar to the boycott campaign that helped end apartheid in South Africa. And the boycott calls for non-violent pressure against Israel until it complies with international law.”

The claim that the BDS campaign was initiated by “Palestinian organisations” is false – as David Hirsh has noted:

“In the 1970s and 80s the ANC, which positioned itself as the voice of the whole South African nation, called for a boycott of South Africa. Campaigners for the boycott positioned themselves as passive responders to the “call” of the oppressed. The BDS campaign against Israel has, since 2005, tried to position itself in the same way. However in truth, British anti-Israel activists started the boycott campaign and they persuaded people in Palestine to issue the “call”. Although neither the Palestinian Authority nor Hamas have issued a “call”, the BDS movement says that the “call” is issued by “Palestinian Civil Society”. […]

The pretence is politically important because it positions Palestinians as being the initiators of the “call” and people outside the region as passive responders to the voice of “the oppressed”.”

Readers found the video of Deas from the 2015 television report embedded in that report and were also offered a link – with the authoritative title “What is the BDS movement?” – to a 2015 article by Kevin Connolly which likewise features Deas and amplifies the ‘apartheid’ smear. 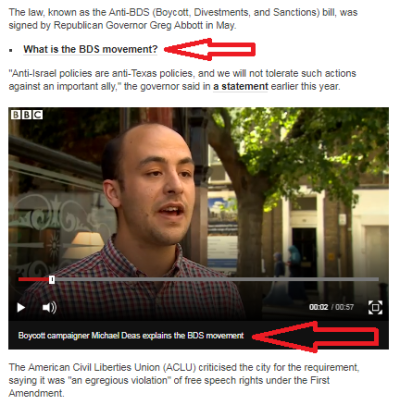 The BBC’s record of reporting on the anti-Israel BDS campaign is abysmal: for years the corporation has reported related stories without adequately clarifying to its audiences that what that campaign ultimately seeks to achieve is the end of Israel as the Jewish state.  Moreover, in August 2015, we learned that the BBC considers that provision of such crucial background information is “not our role“.

It is therefore not surprising that the BBC News website now finds itself with no archive material to offer its readers as background information on the BDS campaign other than amplifications of the one-sided propaganda of a professional activist.

Obviously the BBC cannot honestly claim to be accurately and impartially covering the anti-Israel campaign that calls itself BDS when it consistently fails to tell its audiences to what that campaign really aspires.

The BDS background the BBC avoids giving its audiences

BBC: ‘Israel is deeply controversial’ and BDS is a ‘human rights’ group