On October 30th the IDF carried out a controlled explosion on a cross-border attack tunnel running from the Gaza Strip into Israeli territory.

“The military said the tunnel had been under surveillance for an extended period of time and was under active construction at the time of the demolition.

The tunnel, which the IDF described as a “grave and unacceptable violation of Israeli sovereignty,” started in the Gazan city of Khan Younis, crossing under the border and approaching the Israeli community of Kibbutz Kissufim, the army said.

“The tunnel was detonated from within Israel, adjacent to the security fence,” the military said in a statement.

The demolition was carried out near the fence separating Israel from Gaza.”

In the hours that followed it emerged that a number of operatives from the terror groups Palestinian Islamic Jihad and Hamas had died.

“At least seven men were killed and another 12 injured on Monday when the Israeli army blew up an attack tunnel stretching from the Gaza Strip into Israeli territory, the Hamas-run Gaza Health Ministry said […]

“The explosion took place inside Israeli territory. The majority of the dead were activists that entered the tunnel after it was exploded and died in the Gaza Strip, and not as a result of the explosion,” said an IDF spokesperson Avichay Adraee. […]

The BBC News website’s October 30th report on that story ran with a headline that gives readers the inaccurate impression that the tunnel’s destruction took place in the Gaza Strip: “Gaza: Palestinian militants killed as Israel hits tunnel“.

The original text of the article similarly failed to adequately clarify to BBC audiences that the controlled explosion took place inside Israeli territory.

“Seven Palestinian militants were killed and several others injured when Israel destroyed a tunnel running from Gaza into Israel, Palestinian officials say. […]

The Israeli military said the tunnel it destroyed on Monday ran from Khan Younis, in the southern Gaza Strip, into Israeli territory, about 2km (1.2 miles) from the town [sic] of Kissufim.”

The day after the article’s appearance the words “[t]he army said the destruction took place on the Israeli side of the border with Gaza” were added following complaints and a footnote appended to the report.

So perhaps (in addition to not knowing that Kissufim is a kibbutz rather than a “town”) the BBC was not initially aware of the fact that the operation took place inside Israel? A Tweet from a “BBC News senior producer in Israel” shows that is not the case and also casts light on the use of superfluous punctuation around the phrase terror tunnel in the report:

“The Israeli military said the “terror tunnel” was still under construction when it was “neutralised”.” 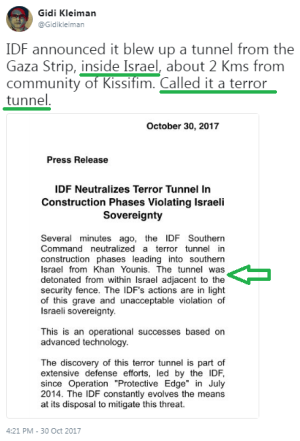 Does the BBC really believe that there is room for doubt about the purpose of a tunnel infiltrating Israeli territory constructed by an Iranian backed terrorist organisation? Apparently it does because the article went on to unquestioningly amplify that terror group’s propaganda.

“An Islamic Jihad statement said the tunnels were “part of the policy of deterrence to defend the Palestinian people” and accused Israel of a “dangerous escalation”, according to AFP news agency.”

In addition, this report included a recycled paragraph on the topic of casualty figures during the summer 2014 conflict which the BBC attributes to “the UN”.

In fact – as has been shown here before – the casualty figures and debatable civilian/combatant casualty ratios that the BBC elects to repeatedly amplify were supplied by Hamas and NGOs involved in ‘lawfare’ campaigning against Israel, funnelled through a partisan UN agency and subsequently promoted in a controversial and biased UNHRC report.

Since the end of the 2014 conflict the BBC has consistently under-reported the story of cross-border attack tunnels constructed by Gaza based terror groups. Audiences have heard very little about the diversion of construction materials and funds for that purpose and nothing at all about the Israeli civilians living adjacent to the border with the Gaza Strip who are under threat from such tunnels. This latest report obviously contributes little to rectifying that.

BBC News conceals part of a story on Hamas tunnels