Earlier this month BBC One viewers heard Andrew Marr portray Israeli counter-terrorism measures along the border with the Gaza Strip as follows (at 05:45 here) during an interview with the Israeli prime minister:

Marr: “Now what is also clear, however, is that your policy for Gaza is not working: the policy of having a kind of cordon around Gaza, restricting what can come in and out – a kind of blockade of Gaza – has actually increased the power of Hamas in Gaza and mobilised the population behind Gaza because of the appalling human rights situation inside Gaza. This policy is simply not working.”

As has been noted here on many occasions, the BBC’s portrayal of that topic is usually at best superficial and at worst misleading and politically motivated. In the past audiences have seen or heard restrictions on the movement of people and very specific materials in and out of the Gaza Strip inaccurately described as “collective punishment” or a “siege”.

“Israel and Egypt maintain a blockade around Gaza aimed at preventing attacks by militants there, though the measure has been condemned by rights groups as a form of collective punishment.” BBC News website, February 13th 2017.

“One of the reasons Gaza’s often described as the largest open-air prison in the world is the difficulty of getting across the border with Israel.” BBC World Service radio, May 19th 2015.

However, beyond the ‘Israel says’ mantra, BBC audiences rarely hear about the reasons why restrictions placed on the border with the Gaza Strip are necessary because Hamas terrorism is consistently ignored, downplayed or erased – with the result being that BBC audiences are therefore ill-equipped to put portrayals such as the one by Marr into their appropriate context.

Another story which would help BBC audiences understand the real reasons for counter-terrorism measures, including restrictions on the entry of weapons and dual purpose goods into the Gaza Strip, recently came to light. 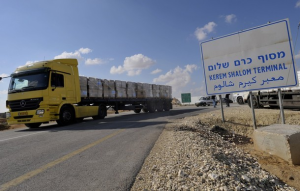 “An Israeli laboratory at the Kerem Shalom Gaza crossing recently thwarted an attempted smuggling of several tons of explosive substances that were headed for terror groups in the strip.

The lab, which was recently established at the crossing at the behest of the Land Crossings Authority in the Ministry of Defense, was called into action after a truck arrived at the area that was carrying what was said to be a large load of car oils.

Guards conducting the security checks grew suspicious of the truck’s content, and transferred specific oil types to the lab for further investigation, where it transpired that the oils were not intended for car engines, but were rather dangerous substances intended for the production of large quantities of explosive devices.”

The BBC – which is of course committed to helping its funding public understand “the world around them” – has so far ignored this story, thereby passing up yet another opportunity to help its audiences understand why Israel’s counter-terrorism measures are necessary – even as it continues to focus their attentions on the “appalling human rights situation inside Gaza”.