On March 21st the BBC News website produced written and filmed reports about Israel’s acknowledgement of air strikes that destroyed a nuclear reactor in the Deir ez Zor region of Syria over a decade ago.

Not for the first time however, the BBC was obviously keen to communicate to audiences that there is room for doubt concerning the nature of the target.

The filmed report is headlined “Israeli footage of 2007 air strike on Syria ‘reactor’” and its synopsis reads:

“Israel has for the first time confirmed that it destroyed a suspected nuclear reactor being built in Syria in 2007.” [emphasis added] 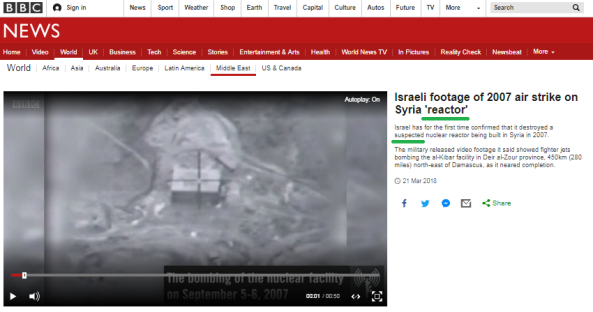 “Israel has for the first time confirmed that it destroyed a suspected nuclear reactor being built in Syria in 2007.

Syria’s government has repeatedly denied that it was building a reactor.”

In a section headed “from the archive” readers find old BBC reports in which Syrian regime propaganda was amplified.

Linking to a BBC report from May 2011, readers are later told that:

“The Syrian military did not retaliate after the attack. President Bashar al-Assad said only that Israel had “bombed buildings and construction related to the military”, which were “not used”.

The International Atomic Energy Agency (IAEA) concluded in 2011 that the site was “very likely” to have been a nuclear reactor.

Syria had signed the Treaty on the Non-Proliferation of Nuclear Weapons (NPT) before the strike, which gave it the right to build a reactor to generate electricity. But it was also obliged to notify the IAEA of any plans to construct a nuclear facility.”

Readers however learn nothing of more concrete statements from the IAEA’s head or of various US statements on the topic of the al Kibar reactor.

The article includes analysis from the BBC’s Jerusalem correspondent Tom Bateman under the heading “Why is Israel making this public now?”, with Bateman’s theory being that the confirmation is related to Iran and the JCPOA.

“Israel accuses Iran of maintaining nuclear ambitions – amounting to an existential threat – and believes its forces are trying to establish themselves permanently over its northern border in Syria – a claim Iran rejects.

The country may hope to add a sharper military edge to American diplomatic pressure on Europe to toughen its stance on the 2015 nuclear deal between Iran and six world powers – an agreement detested by Israel.”

However, Bateman refrains from informing BBC audiences of factors such as those listed by former IDF spokesman Lt Col Peter Lerner in an article at the Forward:

“First, the strike had already been reported widely in the international media, rendering it difficult for the censor to maintain the ban.

Second, former Prime Minister Ehud Olmert wrote a biography while in prison and revealed some of the details. His book is scheduled to be released tomorrow.

Third, Israeli Channel 10 appealed the Supreme Court to remove the ban, forcing the defense establishment to review the scope of the censored story.”

At the Times of Israel, Judah Ari Gross notes that:

“There was no one reason given for the decision to remove the censorship on the al-Kibar strike, but it most likely came from a variety of considerations, among them repeated legal appeals by media outlets to get rid of the ban.

It is easiest to see this announcement as a not-so-subtle threat aimed at atomically ambitious Iran, especially given the fact that in the coming months US President Donald Trump may abandon the 2015 Iran nuclear deal, unless significant alterations are made to it. […]

Ultimately, though, the immediate cause for the timing of the revelation might be a bit more banal: Ehud Olmert wrote a memoir, which is due to be distributed shortly. […]

How could Olmert, who left office under police investigation and was later sent to prison for corruption, and who sustained bitter criticism over his mishandling of the 2006 Lebanon war, leave out one of his crowning, lasting achievements?”

Bateman also tells readers that “[i]t was never in any real doubt that Israel was behind the strike on the al-Kibar facility in the Syrian desert a decade ago” but remarkably, the BBC continues to find it appropriate to suggest to its audiences the idea that Israel went to the trouble of carrying out such a complicated and risky operation on a target that may not have been a nuclear reactor at all.