Visitors to the BBC News website’s main homepage, its ‘World’ page or its ‘Middle East’ page on the morning of June 20th were all informed that the people who had fired forty-five military grade projectiles at Israeli civilian communities in the space of some five hours during the previous night are ‘militants’ rather than terrorists. 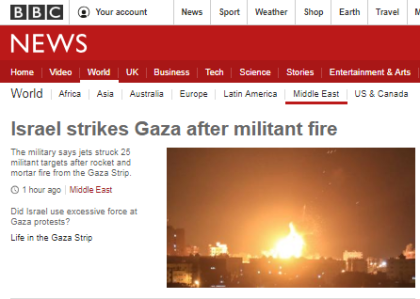 In typical ‘last-first’ style, the headline to the BBC News website’s report on that story read “Israeli jets strike Gaza after rocket and mortar fire” and the euphemism ‘militants’ was seen again.

The military said 25 targets linked to the militant Hamas movement were hit, in response to a barrage of about 45 rockets and mortar shells.”

Quoting “Gaza’s health ministry” without informing readers that it is run by the same terror organisation which co-organises, funds and facilitates the ‘Great Return March’ agitprop, the report went on:

“The strikes follow weeks of confrontation along the Gaza border.

More than 120 Palestinians have been killed by Israeli forces and thousands more wounded since a protest campaign began on 30 March, Gaza’s health ministry says.”

Readers were not informed that over 80% of those killed during the violent riots have been shown to be linked to assorted terror groups or that Hamas itself admitted that the vast majority of those killed on May 14th belonged to its organisation.

The report went on to give a context-free portrayal of the Palestinian demand for ‘right of return’ with no effort made by the BBC to explain to readers what Hamas freely admits: that the aim of that demand is the eradication of the Jewish state. 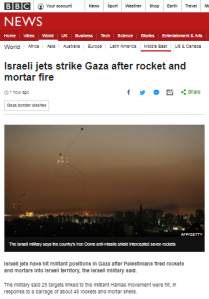 “The demonstrations have seen thousands of Palestinians mass on the border in support of the declared right of Palestinian refugees to return to their ancestral homes in what is now Israel.”

Despite the fact that the BBC is fully aware of the fact that attacks with petrol bombs, IEDs and guns have taken place in addition to attempts to damage the fence and infiltrate Israeli territory, it continues to avoid presenting such information in its own words.

“Human rights groups have accused Israeli troops of using excessive force. Israel has said they have only opened fire in self-defence or on people trying to infiltrate its territory under the cover of the protests.”

Although the June 20th attacks began at around 01:15 and continued until just before 6 a.m., the BBC claimed a more limited time-frame.

With the BBC having refrained from producing any serious reporting on the topic of the hundreds of deliberate arson attacks perpetrated over the last two months, it is unlikely that BBC audiences would be able to fill in the blanks left by the BBC’s tepid description of “kites….sent into Israel”.

The later part of the report purports to provide background information (including a map sourced from a partisan UN agency) but avoids informing readers of the highly relevant fact that the blockade on the Gaza Strip was implemented in response to Hamas terror attacks and not – as implied by the BBC – because Hamas “ousted” the Palestinian Authority.

“Gaza, an impoverished enclave of some two million residents, has long been blockaded by Israel and Egypt.

The blockade was tightened after Hamas, an Islamist group that won Palestinian elections in 2006, ousted its secular Fatah rivals from Gaza a year later.”

Two days before this report was published terror groups had launched rockets at the Ashkelon area. That attack went unreported by the BBC at the time and was not mentioned in this report.

Although Israeli civilians residing in the Western Negev region have been the target of eleven separate incidents of missile attack from the Gaza Strip since the beginning of this year, BBC audiences have not seen or heard even one interview with any of the thousands of the ordinary people affected by that terrorism. This report continued that editorial policy. 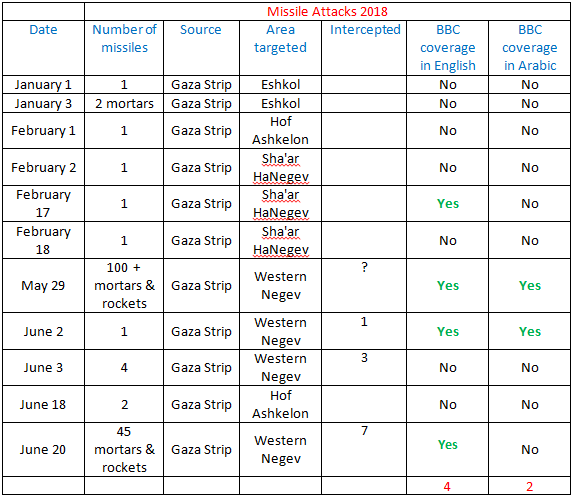 21 comments on “How did BBC News report the latest Gaza missile attacks?”