Last month we noted that the BBC had completely ignored the fact that Hamas had removed from its list of May 14th ‘Great Return March’ casualties a baby girl whom BBC audiences were told on numerous platforms had died as a result of Israeli actions.

Even after Hamas had removed – on May 25th – Layla al-Ghandour’s name from its list of Palestinian casualties, the 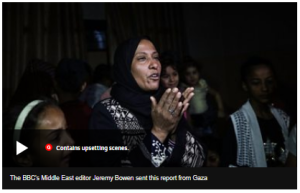 BBC continued to promote a filmed report by Jeremy Bowen in which viewers were given to understand that Israel was responsible for her death.

Twelve days after the Hamas announcement, Bowen’s report was embedded into an article published on the BBC News website’s ‘UK politics’ page and that item – along with several others – continues to be available to the public.

Late last month a Palestinian from the Gaza Strip was apprehended while taking part in a border infiltration.

“On May 28, IDF forces arrested Mahmoud Omar along with another member of Fatah’s armed wing, the Al-Aqsa Martyrs’ Brigades, after they attempted to infiltrate into Israel and torch an unmanned IDF post, the Southern District Attorney’s indictment against him said. […]

During his questioning, Omar told interrogators the details of the planned attack and detailed his involvement in other terror-related activities.

The suspect also disclosed that he was related to Layla Ghandour, the 8-month-old baby whose May 14 death was originally reported to have been caused by inhalation of tear gas sprayed by Israeli forces at Gaza border protesters. […]

…the suspect was told [by family members] that Layla had died of a blood disease similar to the one that took the life of the deceased infant’s brother, who succumbed to the condition at the same age in 2017.

However, Omar told authorities, Hamas leader Yahya Sinwar paid Layla’s parents, Miriam and Anwar Ghandour, NIS 8,000 ($2,206) to tell the media that the infant had died due to tear gas inhalation at the Gaza protests.”

Despite that development and notwithstanding the fact that Hamas removed the baby from its list of casualties nearly a month ago, BBC audiences can still find reports such as this one claiming that she died because of Israeli actions on May 14th and to date the BBC has failed to make any effort to clarify to its audiences that the claim it widely promoted on a variety of platforms has been called into question.