Many thanks to all those who wrote in to alert us to an item aired in the July 25th edition of the BBC Radio 4 programme ‘Today‘. That report by Paul Adams – currently a BBC diplomatic correspondent and formerly twice based in Jerusalem – was introduced by presenter Mishal Husain (from 0:47:15 here) with multiple inaccuracies.

Husain: “Israel has partially reopened the Kerem Shalom crossing point into the Gaza Strip allowing fuel to enter the territory for the first time in two weeks. The crossing was closed earlier this month after incendiary kites were flown across the border setting fire to agricultural land inside Israel.”

Firstly, the Kerem Shalom crossing was not “closed” – and therefore also not “reopened”. As the BBC News website reported on July 17th, restrictions were placed on the types of goods allowed through:

“No fuel will enter through Kerem Shalom until Sunday, but food and medicine deliveries will still be permitted.” [emphasis added]

The restriction on fuel and gas imports was lifted at noon on July 24th after having been in force since July 17th: in other words for seven and a half days. Husain’s claim that fuel had entered the territory “for the first time in two weeks” is hence inaccurate. Listeners were not told that the restrictions were introduced not only after “incendiary kites were flown across the border” by parties Husain refrains from identifying but also after terror factions in the Gaza Strip had launched over 200 rockets and mortars at Israeli civilians two days beforehand. 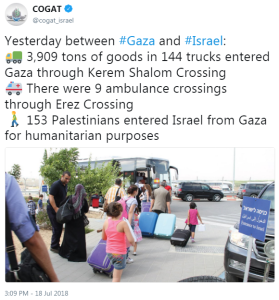 Husain continued with an equally context-free portrayal of the violent rioting – pre-planned, financed and facilitated by Gaza terror factions – that has been taking place since the end of March:

Husain: “The UN says the lack of fuel has affected Gaza’s only power plant and hospitals, where hundreds of Palestinians are still being treated after being shot by Israeli soldiers during the protests of recent weeks.

Mishal Husain of course did not bother to inform listeners of the fact that Hamas has been exploiting diesel fuel imported via Egypt and intended for “Gaza’s only power plant” to boost its own coffers and for terror purposes. She went on:

Husain: “But as our diplomatic correspondent Paul Adams reports, health workers are worried about something much more long-term: the deteriorating mental condition of nearly 2 million Gazans.”

With the background to the report having thus been framed as related to Israel’s counter-terrorism measures, Adams commenced by telling a two month-old story.

Adams: “On the busy streets of Gaza a man sets fire to himself. The crowd gathers and the flames are doused. The man is bundled into a taxi. He makes it to hospital but dies two days later. What drove musical newly married Fathi Harb to take his own life? The man in the online videos dressed as a clown or singing to promote a coffee brand. His grandfather Said tries to make sense of Fathi’s death. Like everyone in Gaza he struggled to make a living but his wife Doha was about to give birth to their first child. The baby, Wattan, was born two days after Fathi died.” 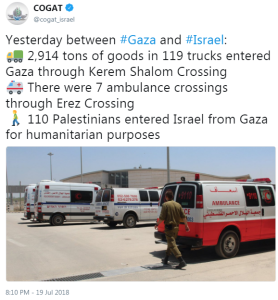 Adams did not inform listeners that – as reported by some journalists at the time – Fathi Harb was “heard cursing the government” as he set himself on fire. Other media outlets noted that his family had been affected by the Palestinian Authority’s cutting of salaries to employees in the Gaza Strip.

In Paul Adams’ account, however, there is no room for any mention whatsoever of Hamas or the Fatah dominated Palestinian Authority.

Adams: “Suicide is a terrible sin in Islam and yet Fathi Harb chose to do it out in the street in front of dozens of people. He was clearly desperate and so it seems are more and more people here. Gaza’s boiling border has been in and out of the news since March but UN staff have been worried about Gaza’s young men for months.”

Following Adams’ promotion of that false linkage between the economic situation and the ‘Great Return March’ agitprop, listeners heard from “a UN health worker who claimed “more cases” since the beginning of the year. Adams commented that:

Adams: “It seems as though particularly educated young people are especially vulnerable to this kind of suicidal thought.”

The UN health worker gave a reply which conveniently fits in with Adams’ framing of the story, claiming that such people are “open to the world and the same time they cannot see the world.”

Adams: “And it’s not just suicide. Domestic abuse is another alarming trend. At a UN clinic local women are discussing stress management. With unemployed, depressed husbands and angry, restive children Gaza’s women are under strain.” 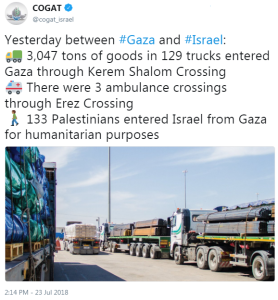 After listeners had heard from one of those women, Adams went on, again studiously avoiding any mention of uncomfortable subjects such as Hamas’ use of water and sewage pipes to make rockets or Mahmoud Abbas’ deliberate exacerbation of the Gaza power crisis last year.

Adams: “Gaza has been crumbling for decades. War and economic isolation have taken their toll. There’s no proper drinking water. Electricity comes on for just 3 hours a day – sometimes in the middle of the night.”

Adams then introduced another interviewee:

Hutton – who told listeners that “anybody who lives under these conditions” would “have an erosion of coping skills” – actually works for UNRWA and unsurprisingly had nothing to say about Hamas’ responsibility for what he described as “the chronic stress that people live with”. Adams went on:

Adams: “The youngest need help too. ‘Save the Children’ runs a youth centre at Beit Hanoun at the northern end of the Gaza Strip, close to the Israeli border. Encouraged by an instructor, girls in their early teen years play games, sing and forget themselves. But there are haunted faces here too, hanging back, uncertain, troubled.”

Adams did not bother to ask whether those “haunted faces” might be linked to the fact that four years ago, children living in Beit Hanoun and Beit Lahia were witness to the firing of 69.4% of the 3,356 missiles fired at civilian targets in Israel by terrorists in the Gaza Strip between July 8th and August 5th 2014.

Adams closed his report with a quote from the NGO which typically avoids mentioning the effects of Palestinian terrorists’ rocket and mortar attacks on Israeli children:

Adams: “‘Save the Children’ say 95% of Gaza’s children experience psychological distress: yet another Palestinian generation growing up with the corrosive effects of a conflict apparently without end.”

As we see, Paul Adams managed to get through his entire report without mentioning the words Hamas and terrorism even once. Obviously such blatantly context-free reporting – along with Mishal Husain’s inaccurate claims -not only contributes nothing at all to the BBC’s public purpose of helping its audiences “engage fully with issues” but actively hinders that process.