Those watching the BBC World News television channel on the morning of July 29th saw a filmed report by BBC Arabic’s Nida Ibrahim in the English language about the release of Ahed Tamimi from prison. Ibrahim’s report is remarkable for its one-sided portrayal of that story and its wider background. 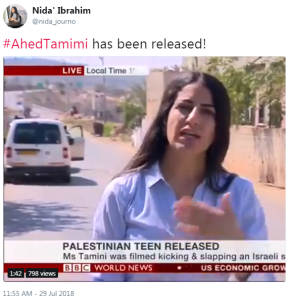 [emphasis in italics in the original]

Ibrahim: “…we’ve seen the father hugging his child and we’ve seen the mother who was actually in prison and was released with Ahed chanting slogans, remembering their cousin who was killed by Israeli fire in June in the village of Nabi Saleh where we are standing right now. Upon her release Ahed has come to this house over there which is the house of Izz al-Din al Tamimi – the cousin who was killed in June. She has paid her condolences to the family over there before leaving this actual place to go to Ramallah.”

BBC viewers around the world were not informed that Tamimi and others initiated the June 6th violent rioting that led to his death.

“Soldiers had entered the village to arrest a suspect, according to the IDF. A group of more than 10 Palestinians threw stones at them and the army responded with riot dispersal methods.

According to the army, Tamimi threw a stone that hit a solider in the head. That soldier responded by firing at Tamimi, who was then treated medically at the scene before being declared dead.”

Neither were they informed that a terror faction claimed him as one of its members:

“The Democratic Front for the Liberation of Palestine (DFLP) issued a death notice for him which claimed al-Tamimi joined the organization in 2014. He was imprisoned in Israel twice, once for six months and once for a year, on the grounds of membership in the DFLP’s youth organization and participating in “resistance” [i.e., terrorist] activities.”

Ibrahim went on to recount that Tamimi was expected to “visit the grave of the late Palestinian president Yasser Arafat before heading back to the village of Nabi Saleh where she is expected to hold a presser”. Viewers then heard the programme presenter  – apparently Ben Brown – come up with the following questionable pronunciation on “international law”.

Presenter: “This isn’t a one-off case, is it? Children are often tried in military courts and imprisoned in adult jails. It’s against international law. What is Israel’s explanation for that?”

Of course if Palestinians accused of security offences were tried in Israeli civil courts, the BBC would be the first to be jumping up and down shouting ‘annexation!’ because that would mean that Israeli sovereignty had been extended to Judea & Samaria.

Unable to give a coherent fact-based answer to that question, Nida Ibrahim proceeded to tell BBC audiences – wrongly – that the reason is “deterrence”.

Ibrahim: “As you know Palestinians live under Israeli occupation and this means that even minors are being tried in military courts – not in civil courts like their Israeli counterparts or like even settlers in the West Bank. Israel definitely says that this is a form of deterrence. They want to deter more Palestinians from doing these acts. Many Israelis have argued that the image of the Israeli army has been…ah….ah…hurt really badly by the slap of Ahed Tamimi which went viral on social media. So it’s seen as an act of preventing more Palestinians from pursuing this act and of course they are saying that there are many Palestinians who might see Ahed as a heroine and they might try to imitate her. She’s…remember she celebrated her 17th birthday in jail so she’s still young. She has a lot upcoming for her and she might be inspiring many Palestinians like her.”

So in addition to a context-free story about a member of the Tamimi clan “killed in June” and some dubious messaging concerning “international law”, viewers also got a hefty dose of one-sided glorification of Ahed Tamimi’s violent actions from BBC Arabic’s Nida Ibrahim. But as we will see in part two of this post, that was not Ibrahim’s only English language filmed report of the day.