On the morning of November 13th the BBC News website published another report about the flare-up of violence which had begun the previous afternoon.

The use of the word “traded” – i.e. exchanged – in both those headlines obviously suggests equivalence between the actions of the two sides, as do the report’s carefully ‘balanced’ opening lines.

“Eight people have been killed in a flare-up of violence between Israel and Palestinian militants in Gaza.

More than 460 rockets have been fired into Israel by militants since Monday night, while Israeli aircraft have hit 160 militant targets in response.

Seven Palestinians, several of them militants, died in the strikes on Gaza, while a Palestinian civilian was killed in a rocket attack in southern Israel.” [emphasis added]

However, this story is not about comparable actions. It is actually about an attack – unprecedented in scale – which Hamas and other terror organisations chose to launch against Israeli civilians in southern Israel. The response of Israel to that attack was not equivalent as implied by the BBC: the response struck exclusively military – not civilian – targets after advance warnings were given.

So how was that story portrayed in the report itself?

The report makes use of four photographs: two from Israel and two from the Gaza Strip. The first narrow-angle image photographed in Israel is captioned “Buildings in the southern Israeli town of Ashkelon were hit by rockets fired from Gaza”. 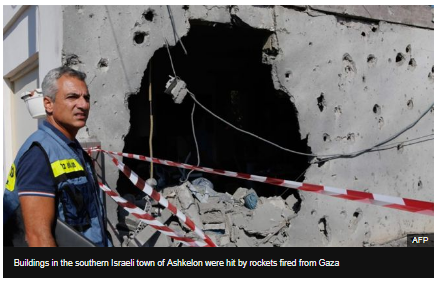 The original caption to that photograph however reads: [emphasis added]

“An Israeli man [apparently a property tax inspector – Ed.] inspects a house damaged by a rocket fired from the Gaza Strip, in the southern Israeli town of Ashkelon, on November 13, 2018″

In other words, the BBC chose to relabel a house as “buildings”.

The second picture photographed in Israel is captioned “Schools have been ordered to close in Israeli border communities as a precaution” and does not show any of the damage inflicted on homes and businesses on November 12th/13th. 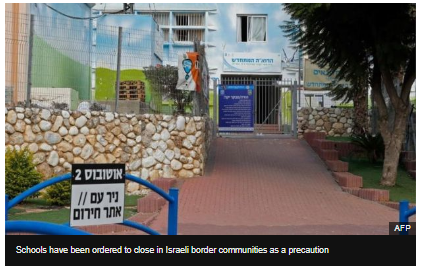 The first of the two photographs taken in the Gaza Strip is a wide-angle shot captioned “Israeli aircraft struck the Hamas interior security headquarters in Gaza City”. 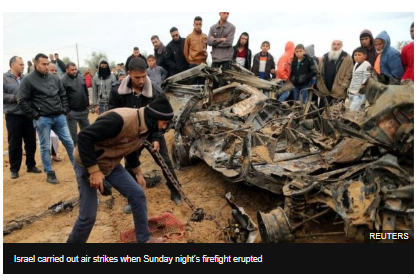 In other words, readers of this report saw twice as many photographs of damage in the Gaza Strip than that in Israel and the one image which does show the results of terrorists’ rocket attack to the exterior of a house leads BBC audiences to believe that such damage occurred in one location – Ashkelon.

Civilian homes, businesses and a pre-school were also destroyed or damaged by direct hits in Netivot, Sderot and kibbutzim in Eshkol, Sha’ar HaNegev and Hof Ashkelon but that information does not appear anywhere in the BBC’s account of events in Israel. The fact that what the BBC described as “Sunday night’s violence” included the launching of 17 rockets from the Gaza Strip was erased from audience view and the BBC refrained from identifying the perpetrators of Monday’s attacks, while under-reporting the number of Israelis who needed medical care after they took place.

“After a brief lull following Sunday night’s violence, a barrage of rockets and mortars was launched towards Israel late on Monday, which Israeli medics said killed one person and injured 28.

A bus, which had reportedly been carrying troops, was hit by an anti-tank missile in the Shaar Hanegev region, seriously wounding a male soldier.

Overnight, a man was killed when a block of flats in Ashkelon was hit by a rocket. He was later identified as a Palestinian from the occupied West Bank who had been working in Israel.

Eight other people were injured in the attack, including two women who the Israeli ambulance service said were in a serious condition.” [emphasis added]

In contrast, the BBC’s portrayal of events in the Gaza Strip left readers in no doubt as to who had launched attacks. The account was not given in the BBC’s own words but paraphrased Israeli army statements and it gave details of three targets while failing to report that advance warning of the strikes was given and euphemistically describing members of terrorist organisations as “militants”.

“In response, the Israel Defense Forces (IDF) carried out what it called a wide-scale attack against military targets belonging to the Hamas and Islamic Jihad groups.

It said they included Hamas’s military intelligence headquarters in northern Gaza and “a unique vessel” in a harbour in the south of the territory.

The building housing Hamas’s Al-Aqsa TV was also bombed after being evacuated. The IDF said the outlet “contributes to Hamas’s military actions”.

The Hamas-run Gaza health ministry said seven people were killed and 26 others injured in the strikes. At least four of the dead were militants; two are said to have been farmers in northern Gaza.” [emphasis added]

The BBC’s report included ‘analysis’ from Jerusalem bureau correspondent Tom Bateman reporting – readers were told – from “southern Israel”. Notably, Bateman’s reporting did not include any interviews with Israeli civilians affected by the heaviest ever barrage of rocket attacks launched by Gaza Strip terrorists and so BBC audiences went away with the mistaken impression that just one block of flats in Ashkelon was damaged in these attacks.

BBC Radio 4: nothing to see in southern Israel, move along to Gaza