The December 26th edition of the BBC Radio 4 programme ‘World at One’ included an item relating to the UK Foreign Secretary’s announcement of a review into the plight of persecuted Christians around the world. 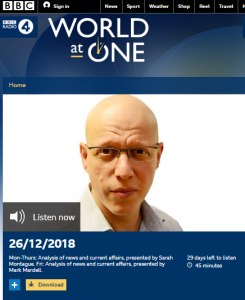 Presenter Jonny Dymond introduced that item (from 07:24 here) as follows: [emphasis in italics in the original, emphasis in bold added]

Dymond: “More than 200 million Christians are at risk of persecution around the world – a number that has risen sharply over the past few decades according to the Foreign Office. In Christianity’s home – the Middle East – the numbers speak for themselves. Four fifths of Iraq’s Christians have fled or been killed. In Israel and the Palestinian territories as those following other religions have grown sharply in number, the Christian population has shrunk. Today the Foreign Secretary Jeremy Hunt ordered a review into the persecuted Christians around the world and how much help they get from the UK.”

The item continued with a recording of Mr Hunt speaking about his announcement and a report about Christians in Pakistan.

Let’s take a closer look at Dymond’s claim that “in Israel….the Christian population has shrunk”.

In other words, in contrast to Dymond’s claim that the Christian population of Israel has “shrunk”, throughout the first 70 years of Israel’s existence it steadily grew from 34,000 to 171,900. At the end of 2018 Israel has around 175,000 Christian citizens who make up around 2% of the total population.

Had Dymond confined himself to saying that in the Palestinian territories – the parts of Judea & Samaria governed for decades by the Palestinian Authority and the Gaza Strip now under Hamas control for over a decade – the Christian population has shrunk, he would have been correct. However, his inclusion of Israel in that claim is inaccurate and, particularly in an item about persecution of Christian communities, materially misleading to BBC audiences.

How to Complain to the BBC