Long-time readers may recall that five years ago both BBC Two’s ‘Newsnight’ and BBC Radio 4’s ‘Today’ covered a story that was portrayed by the then ‘Newsnight’ presenter Jeremy Paxman as a ‘free speech’ issue:

“Now a French comedian has managed to short-circuit his country’s professed commitment to free speech. President Francois Holland, with support from both Right and Left, today encouraged local authorities to ban performances by Dieudonné M’bala-M’bala – usually known just as “Dieudonné”. It’s being done on grounds of public order because his alleged antisemitism has tested to destruction Voltaire’s supposed belief that ‘I disapprove of what you say, but I will defend to the death your right to say it.’ “ 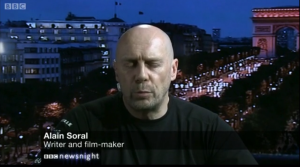 That ‘Newsnight’ report included an interview with a man introduced by Paxman as “the French writer and film-maker Alain Soral” and “a close friend of Monsieur Dieudonné” who “helped him popularise the infamous quenelle gesture”. BBC audiences were told nothing of Soral’s far-Right affiliations and record of antisemitism before they heard him whitewashing the antisemitism of his “close friend” by means of antisemitic conspiracy theories.

In April 2017 Soral was featured in an article about the French elections on the BBC News website with readers told that “what makes him so controversial are the anti-Semitic views he is accused of peddling – under the guise of “anti-Zionism” – on his hugely successful website” and that:

“…on one issue Alain Soral undoubtedly has a point: speech is being policed with increasing zeal in France.”

Last week the man the BBC found it appropriate to interview on the subject of antisemitism was sentenced to a year in prison.

“A French court on Thursday sentenced far-right Holocaust denier Alain Soral to one year in prison for insulting a magistrate and making anti-Semitic comments on his website.

On the site, which is called “Equality and Reconciliation,” Soral wrote that Jews “are manipulative, domineering and hateful.”

Soral, 60, has been convicted multiple times of incitement to hatred over a constant stream of anti-Semitic comments over the years.”

While this latest conviction will come as no surprise to those familiar with Soral, five years on it is still unclear how BBC editors could have been so uninformed as to consider the airing of his antisemitic conspiracy theories and whitewashing of the racism of his “close friend” to be any kind of contribution to audience understanding of antisemitism.