A report published on the BBC News website on January 20th under the headline “Israel’s PM Netanyahu signs deals with Chad’s President Deby” includes an example of how audiences can be misled by a statement that is in itself factually correct but excludes relevant information. 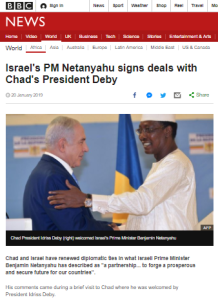 At the end of that report on the renewal of diplomatic relations between Israel and Chad readers were told that: “the Israeli prime minister is trying to separate the peace process with the Palestinians from relations with majority-Muslim countries” and the report then went on:

“In 2016, Mr Netanyahu became the first Israeli premier to visit Africa in nearly three decades, with a trip to Uganda, Ethiopia, Kenya and Rwanda.

A year later he attended a meeting in Liberia of heads of state from the West African regional group, Ecowas. But an Israel-Africa summit that was supposed to take place in Togo in October 2017 was cancelled.” [emphasis added]

Reasonable readers would obviously conclude that the reason for the postponement of that summit was linked to Israel’s diplomatic efforts in Africa. In fact the summit did not take place as planned because of domestic unrest in Togo.

“The landmark Africa-Israel summit has been postponed at the request of the president of Togo amid growing unrest in his country and calls for his resignation.

Some 54 African countries had been invited to meet with Israel at the Oct. 23-27 summit in Lome, the capital of Togo.

President Faure Essozimna Gnassingbe emphasized that “elaborate preparations are needed” in order to guarantee the success of the event, Israel’s Ministry of Foreign Affairs said in a statement Monday announcing the postponement. The summit will be moved “to a mutually agreed upon date,” the statement said. “

And so, while receiving accurate information BBC audiences were nevertheless misled by the omission of relevant detail.