Readers may recall that a few days into the summer 2014 conflict between Israel and Hamas, BBC Watch decided to try to track down the source of the casualty figures being quoted and promoted by the BBC at the time.

“Earlier BBC reports cited casualty figures provided by the notoriously unreliable ministry of health in Gaza. That ministry is still run by Hamas and the personalities quoted in previous conflicts and incidents have not changed. Later reports stress figures supplied by what Bowen describes as “the United Nations”. In fact he – and those other BBC reports – refers to a document put out by UN OCHA on July 11th which can be seen here. That report does indeed state:

“114 Palestinians have been killed since the beginning of the Gaza emergency, of whom 88 (77%) are civilians.”

The question is, of course, where did UN OCHA – an organization which has itself been the subject of controversy in the past – get its information?

So – BBC Watch telephoned the person who complied that report in order to find out.” 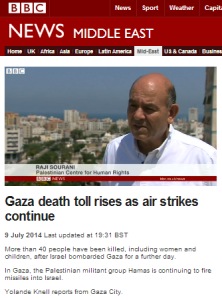 What we discovered was particularly worrying considering that at the time the BBC had already broadcast several reports which included false allegations from one of the parties supplying UN OCHA with information.

“Katleen Maes informed us that UN OCHA’s three primary sources are B’Tselem, the PCHR and Al Mezan – all of which are political NGOs with a less than pristine record on impartiality in Israel-related matters. Maes added that the secondary sources used by UN OCHA to arrive at its 77% civilian casualty rate figures are the Hamas-run health ministry in Gaza, the Palestinian Red Crescent and the local Arabic media in Gaza, some of which is also run by Hamas and with the rest operating with Hamas consent, of course.”

NGO Monitor recently published a report which, among other things, casts more light onto UN OCHA’s relationship with those primary sources.

OCHA operates Clusters in the areas of Protection; Water, Sanitation and Hygiene; Shelter; Health and Nutrition; Education; and Food Security.

The Protection Cluster, which is responsible for “[m]onitoring and document[ing] violations,” “[p]rovision of legal aid,” and “[a]dvocacy and interventions with Israeli authorities (among other issues) is one of the most problematic in the Arab-Israeli conflict.

Furthermore, the report notes the financial relationship between UN OCHA and, among others, the PCHR.

“OCHA oversees and facilitates government funding via several aid frameworks to some of the most biased and politicized regional NGOs, including a number that are very active in promoting BDS (boycotts, divestment and sanctions) and “lawfare” campaigns against Israel:

1) Humanitarian Repose Plan (HRP) The aforementioned Humanitarian Response Plan (HRP) is one of the primary frameworks through which OCHA-oPt coordinates funding to NGOs. The HRP outlines OCHA’s politicized approach regarding its activities in the region, as well as which NGOs should receive vast amounts of international government funding. In 2016, OCHA-oPt requested $571 million in aid from international donors for some of the most highly biased and politicized NGOs active in the Arab-Israeli conflict.

“Participating Organizations & Funding Requirements” in the 2016 Humanitarian Response Plan include: […]

Palestinian Center for Human Rights (PCHR) – Leader of anti-Israel “lawfare” campaigns, such as an intensive campaign vis-à-vis the International Criminal Court and exploiting courts in democratic countries in order to harass Israeli officials with civil lawsuits and criminal investigations.” 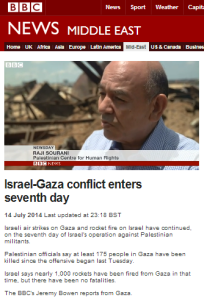 In other words, the data on casualties in the Gaza Strip that was quoted and promoted by the BBC during the summer 2014 conflict was supplied by NGOs involved in ‘lawfare’ campaigning against Israel after having been funnelled through a UN agency which in turn facilitates NGO funding.

Despite the dubious sourcing of the data having been apparent at the time, there was no evidence of any attempt by the BBC to carry out independent verification of the casualty figures and civilian/combatant casualty ratios supplied by interested parties. The corporation not only defended its use of that unverified data but rejected related complaints from members of the public claiming that:

“The UN has made claims as to the number of Palestinians killed and the number of those who are civilians. The BBC reports these numbers attributed to the UN which is of course an internationally recognised organisation. The UN has a large staff in Gaza who compile these reports.”

In fact, as we see above, the UN’s reports were not based on information gathered by its own “large staff in Gaza” at all and that raises the question of whether the BBC even bothered to check out UN OCHA’s methodology before promoting its data. The BBC’s inference that UN supplied data is beyond reproach obviously does not hold water given both UN OCHA’s own politicized agenda and the records of the NGOs from which the data was sourced.

Obviously the BBC’s unquestioning use of unverified UN OCHA supplied data during the conflict of summer 2014 did not meet the standards one would expect from a media organization supposedly committed to accurate and impartial reporting. Before the next round of conflict breaks out, the corporation obviously needs to revisit its policy of blind promotion of UN supplied data if it wishes to be perceived as an impartial media organisation rather than a channel for the amplification of the agendas of campaigning NGOs.