The BBC News website’s reporting on the latest ignominious resolution concerning Jerusalem that was adopted by UNESCO on October 26th was to be found tagged onto the end of a report concerning an archeological discovery titled “Jerusalem reference found on ancient wine ledger“. Readers were told that: 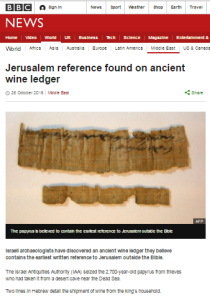 “The discovery was announced on Wednesday shortly after the United Nations Organisation for Education, Science and Culture (Unesco) adopted a second resolution in a week that Israel said denied Judaism’s ties to Jerusalem.

The resolution, according to copies seen by news agencies, mentions only the Islamic name for a key holy site in the city known to Jews as the Temple Mount and al-Haram al-Sharif (Noble Sanctuary) to Muslims.” [emphasis added]

According to the Times of Israel:

“A draft of the resolution obtained by The Times of Israel on Sunday once again referred to the Temple Mount compound solely by its Muslim names, “Al-Aqsa Mosque/Al-Haram Al-Sharif,” and defined it only as “a Muslim holy site of worship.”

As the site of the biblical temples, the mount is the holiest place in Judaism. Unlike last week’s resolution, the draft likely to be adopted Wednesday will not mention the importance of Jerusalem’s Old City for “the three monotheistic religions.””

The BBC, however, was apparently incapable of informing audiences in its own words that such language does indeed deny the ties of Judaism (and Christianity) to Jerusalem, preferring instead to employ its jaded – and redundant – “Israel says” formula. The article closed:

“Israeli Prime Minister Benjamin Netanyahu criticised the “absurdity” of Wednesday’s decision and said he would recall his country’s ambassador to Unesco for consultations on how to proceed.

Senior Palestinian official Saeb Erekat said the resolution was aimed “at reaffirming the importance of Jerusalem for the three monotheistic religions”.”

While amplifying that particular part of the PLO-NAD issued statement, the BBC failed to balance it by informing readers that officials from both Fatah and Hamas lauded the previous UNESCO resolution’s denial of Jewish history.

“A spokesman for the Gaza-based terror group Sami Abu Zuhri said in a statement that his group “welcomes” the resolution’s wording to the effect that “al-Aqsa is of purely Islamic heritage.” He said the decision marks a “victory for the Palestinian people.”

Abu Zuhri added that the UNSECO text “demolished the Israeli fiction” concerning the Temple Mount, the holy area Jews consider to be their most sacred place as the site of the two biblical temples.”

Readers were also not told of the threats issued by the Palestinian and Jordanian delegations to members of UNESCO’s World Heritage Committee ahead of the vote.

As was the case in the BBC News website’s previous two reports concerning UNESCO (see ‘related articles’ below), audiences learned nothing of prior UNESCO motions and resolutions which have similarly erased Jewish ties to historic sites or of the all-important context of this latest UNESCO resolution in the long-standing Palestinian campaign to erase Jewish heritage and history as part of the tactical delegitimisation of Israel.

With this being the third report concerning Palestinian and Arab abuse of the UNESCO forum for political ends that the BBC News website has produced in twelve days, it is by now very obvious that the corporation has no intention whatsoever of providing its funding public with the information which would enhance their understanding of this particular “international issue” – as its remit obliges.