As readers may recall, one notable feature of the BBC’s coverage of the infiltration of an Iranian drone into Israeli airspace on February 10th 2018 was the corporation’s unnecessary qualification of the event. [emphasis added]

“The Israeli military says a “combat helicopter successfully intercepted an Iranian UAV [unmanned aerial vehicle] that was launched from Syria and infiltrated Israel”.

It tweeted footage which it says shows the drone flying into Israeli territory before being hit.” [emphasis added] BBC News website

“Israel’s military, the IDF, released this footage from one of their helicopters. They say it shows an Iranian drone flying over Israeli territory.” [emphasis added] BBC News website

“…the Israelis have a very different narrative of the events of the past 24-36 hours and for them the original provocation was the flying of this drone over their territory.” [emphasis added] BBC World Service radio

“Meanwhile Iran and the Tehran-backed Hezbollah movement in Lebanon – which are allied with the Syrian government – dismissed reports that an Iranian drone had entered Israeli airspace as a “lie”.” BBC News website

“Iran denied it had sent a drone into Israel and defended the Syrians’ right to self-defence.” BBC News website

Later on in February BBC audiences got another heavy dose of Iranian disinformation when the corporation promoted written and filmed versions of an interview by the its chief international correspondent Lyse Doucet with Iran’s deputy foreign minister Abbas Araghchi.

Among the BBC’s coverage of a strike in the early morning hours of April 9th on a military airbase in Syria used by Iranian forces was an extensive report on the BBC World Service radio programme ‘Newshour‘ (from 00:53 here) in which audiences around the world heard presenter Julian Marshall echo the unnecessary qualification previously seen in BBC reporting on the February Iranian drone infiltration. [emphasis in italics in the original, emphasis in bold added] 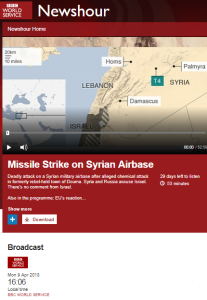 Marshall: “But we begin in Syria where in the early hours of this morning Tiyas military airbase – also known as the T4 airbase – came under attack from missiles. [music] Syrian TV playing stirring music over images that it said show the missiles flying over Lebanese airspace on their way to hit the airbase. Syria and its main backer Russia have accused Israel. The Russian defence ministry said two Israeli F15 warplanes carried out the strikes and Syrian air defence systems shot down five out of eight missiles. Syrian and Iranian forces are reported to have been killed. The Israeli Defence Forces told us they have no comment but Israel targeted the same airbase in February after what it said was an Iranian drone had entered its airspace. There had earlier been speculation that it might have been the work of either the United States or France, both of which had threatened possible retaliation after a suspected chemical weapons attack on the rebel-held town of Douma which left dozens dead. But both the United States and France have denied involvement.”

Later on in the same programme (from 14:05 here) Marshall spoke to the BBC’s Lyse Doucet who used the same unnecessary qualification.

Doucet: “Well that is Israel’s policy. It does not comment on strikes. In fact only once do I know in the Syrian context did they break that policy and that was in February when an Iranian drone is said to have entered Israeli airspace.”

In other words, two months after the incident in which Iranian forces launched a UAV from the T4 airbase in Syria and it was shot down over Israeli territory, the BBC is still failing to present that story clearly and accurately to its audiences.

One of the additional related interviews conducted by Julian Marshall in that programme (from 02:04 here) was with a Syrian journalist called Thabet Salem – who Marshall appeared to believe was qualified to answer the following question:

Marshall: “What would have been Israel’s strategic objective in attacking this airbase?”

Salem: “Well to the Syrians, frankly speaking, destroying Syria is the objective of Israel.”

Listeners around the world heard no challenge to that egregious claim from the BBC’s presenter.

BBC jumbles cause and effect, amplifies disinformation in Iran drone story – part one