On the evening of April 11th the BBC News website published an article titled “Dublin lord mayor beats Israel ban due to ‘spelling error’” on its Middle East page.

“Israel has launched an investigation into how the lord mayor of Dublin got into the country despite a ban.

The interior ministry announced on Tuesday that Mícheál Mac Donncha would not be allowed to enter on account of his ties to a pro-Palestinian group which advocates boycotting Israel.

But Mr Mac Donncha tweeted that he was already in the occupied West Bank after flying into Tel Aviv’s airport.

Officials are reported to have spelt the mayor’s name wrong on a watch list.”

Under the subheading “Why was the mayor banned?”, readers were told that:

It supports the Boycott, Divestment and Sanctions (BDS) movement, which campaigns for a complete boycott of Israel over its policies towards the Palestinians.

There is of course nothing novel about the BBC avoiding informing audiences in its own words what the BDS campaign is all about: for years we have been documenting on these pages how the corporation has serially failed to provide an accurate and impartial portrayal of the aims and agenda of the BDS campaign – even as it has frequently provided that campaign and some of its supporters with free PR.

Notably though, the BBC also presented Mícheál Mac Donncha’s ties to the IPSC as merely something that ‘Israel says’ is the case.

A very brief internet search would have shown the BBC that since his election less than a year ago, Mac Donncha has taken part in several IPSC organised events including the launch (held at the Lord Mayor’s official residence) of a BDS promoting calendar produced by the anti-Israel group in November 2017.

“Speaking at the launch of the calendar, Lord Mayor of Dublin Mícheál Mac Donncha said: “As we close this 50th year of Israel’s occupation of the West Bank and Gaza, it is my honour as Lord Mayor to launch the latest ‘Life In Palestine’ calendar produced by the Ireland-Palestine Solidarity Campaign. The calendar provides a valuable insight into the daily and historical injustices faced by the Palestinian people as they struggle for the freedom, justice, equality and peace that has been so long denied them. The Calendar also has lots of useful information about companies and institutions that profit from Israel’s military occupation and war crimes, and, importantly, how to avoid spending money that will help them profit further.””

In December 2017 Mac Donncha spoke at a protest organised by the IPSC outside the US embassy.

Just last week – again complete with ‘keffiyeh’ scarf – he took part in a demonstration in support of the Hamas-organised ‘Great Return March’.

In other words, the BBC’s qualification of his ties to the ISPC by means use of the words “Israeli officials say” is entirely superfluous and misleading to audiences.

The purpose of Mac Donncha’s visit to the Middle East was described by the BBC as follows:

“Mr Mac Donncha also announced that he would travel to the West Bank on Tuesday to attend a conference on the status of the city of Jerusalem at the invitation of the Palestinian Authority.”

Here is the Lord Mayor of Dublin sitting right below an image of Nazi sympathiser and collaborator Haj Amin al Husseini at that Ramallah ‘conference‘. 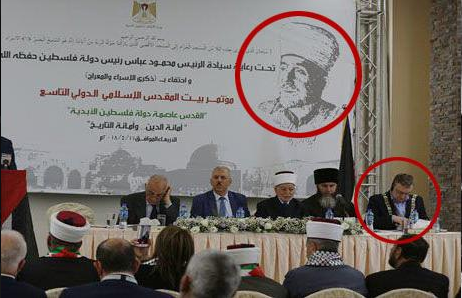 Now that’s a picture that BBC audiences are highly unlikely to see.

Reviewing BBC reporting on the BDS campaign in 2017