Late on the evening of July 20th the BBC News website published a report headlined “Israel carries out Gaza strikes as soldier dies from gunshot” on its main homepage and its ‘World’ and ‘Middle East’ pages. 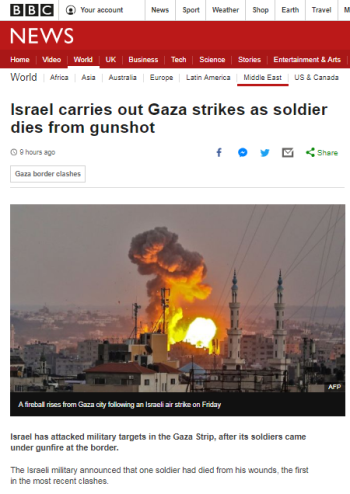 Obviously the identity of the party that fired the “gunshot” is not clear from that headline and the article’s opening lines also did nothing to help readers understand who carried out the attack.

“Israel has attacked military targets in the Gaza Strip, after its soldiers came under gunfire at the border.

The Israeli military announced that one soldier had died from his wounds, the first in the most recent clashes.”

Other media outlets managed to report the same events with more clarity. Here, for example, is a headline from Ynet which uses fewer words to provide a more informative picture to readers.

In the past the BBC has produced similarly opaque headlines relating to vehicular attacks.

Significantly, at no point in the rest of the BBC’s report were audiences informed that Staff Sgt Aviv Levi was killed by a Palestinian sniper.

In contrast, statements concerning the deaths of Palestinians came after readers had been told that “Israel has attacked military targets in the Gaza Strip”.

“Gaza officials said four Palestinians were killed in the strikes, three of them members of militant group Hamas.”

The timeline of events began when the attack in which the IDF officer was shot took place at around 17:30 within the framework of what the BBC insists on inaccurately describing as “protests”. The IDF then struck eight military posts belonging to Hamas. At around 20:30 in the evening, Palestinian terrorists fired three rockets into Israeli territory, two of which were intercepted. Strikes were carried out on additional Hamas infrastructure, including three battalion headquarters.

The BBC’s portrayal of those events was as follows:

“The military said it had struck 15 Hamas military targets in the northern Gaza Strip and an additional 25 in Khan Yunis in the south, adding that the strikes were continuing.

The operation came during another Friday of protests by Palestinians at the border between Israel and Gaza. The Israeli army said three projectiles had been fired into Israel by Palestinian militants.” [emphasis added]

With no mention of the fact that an IDF officer had been wounded in a grenade attack the previous Friday, BBC audiences were told that:

“Israel last week carried out its biggest attack against Hamas targets in Gaza since the war in 2014, in response to more than 200 rockets and mortars fired into the country.”

Readers once again found the BBC’s now standard anodyne portrayal of the ‘Great Return March’ agitprop which continues to conceal from audiences the fact that the casualty figures quoted actually come from Hamas – which organised, facilitated and financed the publicity stunt – and that over 80% of those killed have been shown to have links to various terror factions.

“Palestinians have now been protesting at the border for 17 weeks. Gaza health officials say more than 130 Palestinians have been killed and 15,000 injured by Israeli forces during that time.

The death of a soldier on Friday is the first Israeli fatality in the exchanges.”

Despite the available evidence of Hamas’ encouragement of and involvement in the arson attacks and its organisation and facilitation of the ‘Great Return March’ violence, the BBC is still presenting those issues as Israeli ‘accusations’.

“Israel resumed air attacks on Gaza after last week’s projectile attacks, warning that it would take whatever action necessary to stop incendiary kites and balloons being flown over the border.

It accuses Hamas of controlling the makeshift devices, which have set fields in Israel ablaze, as well as orchestrating the protests at the border, which Israel regards as a threat to its border communities.”

The BBC has had over four months in which to provide its audiences with information on the background to the pre-planned violence it euphemistically describes as “Palestinians…protesting at the border” but clearly it has no intention of doing so.

Gaza missile attacks get 44 words on the BBC News website