The Israel Security Agency’s report on terror attacks (Hebrew) during December 2018 shows that throughout the month a total of 155 incidents took place: 118 in Judea & Samaria, 20 in Jerusalem and 17 in the Gaza Strip sector.

Throughout December three people were killed and fourteen wounded in terror attacks.

A shooting attack at Ofra Junction on December 9th in which seven civilians were wounded and which resulted in the death of a newborn baby initially did not receive coverage on the BBC News website.

A shooting attack near Givat Asaf on December 13th in which two members of the security forces were killed and one wounded was reported in an article that also included a brief mention of the earlier Ofra Junction attack.

Also on December 13th two members of the security forces were wounded in a stabbing attack in Jerusalem and a soldier was wounded in a vehicular attack outside Ramallah. Both those incidents were mentioned in the same report on the attack near Givat Asaf.

On December 14th a soldier was wounded in a stabbing attack in Beit El and two days later a civilian was wounded when her car was pelted with rocks. No coverage of those two incidents was seen on the BBC News website and a rocket attack from the Gaza Strip on December 29th was also ignored.

In summary, four out of 155 terror attacks – 2.6% – which took place during December 2018 were reported on the BBC News website.

Throughout 2018 the BBC News website reported at most 30.2% of the terror attacks that actually took place and 93.3% of the resulting fatalities. 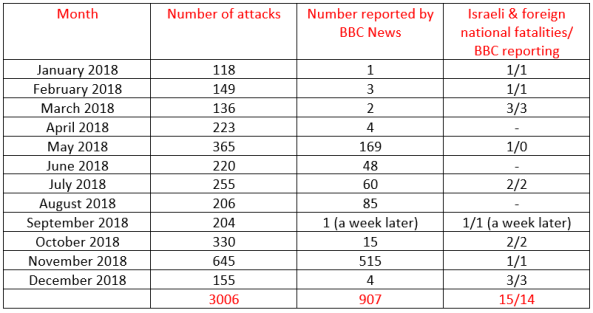