When the BBC News website finally got round to informing its readers of the rocket fire on Tel Aviv that occurred on the evening of March 14th it did so – over 15 hours after the event – using the frequently seen ‘last-first reporting’ formulation: “Israel strikes militant sites in Gaza after rockets fired at Tel Aviv”. 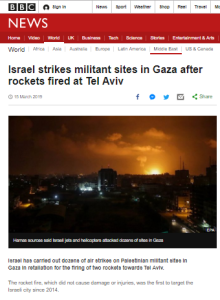 “Israel has carried out dozens of air strikes on Palestinian militant sites in Gaza in retaliation for the firing of two rockets towards Tel Aviv.”

In its opening paragraphs the report told readers that:

“Hamas, which dominates Gaza, insisted it was not behind the rocket fire.

Israeli media are citing an Israeli defence official as saying that the rockets may have been launched “by mistake” while maintenance work was being carried out.”

Even though it later repeated Hamas’ denials, the BBC did not bother to clarify to readers that for such a ‘mistake’ to have happened, Hamas would have had to set up and load a missile launcher which was deliberately aimed at Israel’s biggest metropolitan area.

The article – which included two images from the Gaza Strip and one embedded IDF Tweet with a video of sirens sounding in Tel Aviv – later informed readers that:

“The organising committee of a months-long Palestinian protest campaign also announced that Friday’s weekly demonstrations along Gaza’s border with Israel had been called off “in keeping with the public interest”.”

BBC audiences were not told that among the members of that “organising committee” are terror groups including Hamas and the Palestinian Islamic Jihad. Neither did the BBC bother to clarify to readers that this demonstration of Hamas’ ability to turn off the ‘Great Return March’ tap at will and according to its own interests illustrates just how far off the mark the BBC’s year-long portrayal of the rioting as spontaneous public ‘protests’ has been.

Notably, the BBC’s report did not include any information concerning the related topic of some other protests which have been taking place in the Gaza Strip over the past few days.

“Palestinians in the Gaza Strip took to the streets on Friday for the second successive day to protest against Hamas and the dire economic condition in the Strip, with some reports saying the terror group used live fire to put down the demonstrations. […]

The center of the demonstrations was in Deir el-Balah, where Hebrew media reports said protesters burned tires and blocked one of the central Gaza city’s main roads.

Similar protests were also taking place in Khan Younis in the south of the Strip. […]

Quoting the demonstrators, the Ynet news site said they were beaten by security forces loyal to Hamas, the Islamist terror group that rules Gaza. The Hamas members also reportedly used live fire to disperse the protests.”

Those familiar with the BBC’s serial under-reporting of Palestinian affairs will not be surprised by the fact that those demonstrations against Hamas have to date received no coverage.