On April 13th the IDF announced that the Iranian drone shot down over Israeli territory on February 10th was carrying explosives.

“The Iranian drone shot down in February was carrying enough explosives to cause damage, military sources said. Its precise intended target in Israel was not known, they said. […]

“An analysis of the flight path and operational and intelligence research performed on parts of the Iranian UAV that entered our territory on February 10 shows it carried explosive material and its mission was to carry out a destructive operation,” the Israel Defense Forces revealed Friday.

“The drone’s interception by attack helicopters thwarted the attack and the Iranian intention to carry out an operation on our territory,” it added.”

The following day the BBC News website published an article titled “Iranian drone was sent to Israel ‘to attack’“. Similarly lavish use of punctuation was seen in the report’s opening sentences: 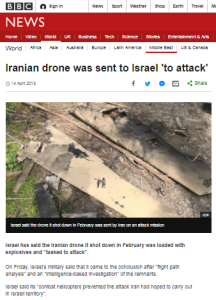 “Israel has said the Iranian drone it shot down in February was loaded with explosives and “tasked to attack”.

On Friday, Israel’s military said that it came to the conclusion after “flight path analysis” and an “intelligence-based investigation” of the remnants.

Israel said its “combat helicopters prevented the attack Iran had hoped to carry out in Israeli territory”.”

“In an interview with the BBC in late February, Iran’s deputy foreign minister refused to confirm that Iran had sent the drone into Israel and said that the drone belonged to the Syrian army.”

The corporation supposedly committed to providing its funding public with “impartial news and information to help people understand and engage with the world around them” was obviously reluctant to inform its audiences whether or not Iran is building up its military presence in Syria and whether or not it supplies arms to its proxy Hizballah.

“Iran and Israel are long-standing enemies, and Iran has been accused of deliberately building up a force inside Syria, Israel’s north-eastern neighbour. […]

It has also been accused of supplying weaponry to Lebanese Shia militant group Hezbollah, an enemy of Israel which has a strong force in Syria.” [emphasis added]

Since publishing a report in November 2017 about ‘claims’ that Iran “is establishing a permanent military base inside Syria”, the BBC has not produced any follow-up reporting on that topic, meaning that audiences are unable to judge for themselves whether or not those ‘accusations’ have any basis.

Likewise, despite both Hizballah’s leader and Iranian officials having publicly confirmed that Iran supplies weaponry to its Lebanese proxy (in violation of UN SC resolution 1701), the BBC continues to serially beat about the bush on that issue too.

Quite how the BBC thinks that ongoing self-censorship and faux ‘objectivity’ serves its commitment to enhance the understanding of its funding public is of course unclear.

BBC jumbles cause and effect, amplifies disinformation in Iran drone story – part one

4 comments on “The BBC, Iran and faux objectivity”